Bringing healing in the most ghastly place on earth


I recently came across an extended report about a Jewish doctor's heroic self-imposed mission in the Auschwitz concentration camp during World War II.  It's a remarkable story of human endurance and courage under the worst possible circumstances.  Here's an excerpt.

[Dr.] Perl was one of five doctors and four nurses ordered to establish a hospital in the camp. She had been told that doctors should bring their instruments on the journey, as they would be allowed to practice medicine. But when she entered the camp, her medical bag was snatched away by another German doctor. “You are going to be the camp gynaecologist,” he told her. “Don’t worry about instruments… you won’t have any. Your medical kit belongs to me now.” Her long hair was shorn, and her right forearm tattooed with her new identity: Prisoner No. 25,404.

Perl found herself responsible not just for gynaecology, but for trying to heal all of the forms of abuse inflicted on her fellow prisoners. She bandaged bleeding head wounds, pulled out infected teeth, and taped up broken ribs. When SS soldiers whipped imprisoned women, she cleaned the painful lacerations. At best she had paper for bandaging and a small knife she sharpened on a stone. When she could do nothing else to help her patients, she soothed with words, speaking of the past and promising a better future.

Though her position filled her with an “impotent distress”, Perl’s help held real value. When prisoners in the hospital were told to provide blood samples, she and the other doctors – knowing that those with contagious diseases would be killed – replaced them with vials of their own blood. On days she knew the SS would clear out the hospital and send the sick to the gas chambers, Perl strategically sent some back to their barracks so they would be spared. She found ointment to soothe a “horrific rash” that spread through the camp, and once helped a prisoner overcome temporary blindness caused by a vitamin deficiency by procuring the necessary injections.

“Without Dr Perl’s medical knowledge and willingness to risk her life by helping us, it would be impossible to know what would have happened to me and to many other female prisoners,” an Auschwitz survivor who went by the name “Ms B” later testified at The Conference on Jewish Material Claims Against Germany. “She was the doctor of the Jews.”

When Mengele learned of her specialty, he gave her a new task: examine every pregnant woman and report her to him directly. He told her they would be sent to a special camp, where they would receive extra bread rations and even milk. She soon learned the truth. One day, she was returning from an errand near the crematorium when she saw a group of pregnant women being beaten with clubs and attacked by dogs. When they collapsed, German soldiers threw them into the crematorium – alive.

Perl stood in shock, unable to move. “Gradually the horror turned into revolt and this revolt shook me out of my lethargy and gave me a new incentive to live,” she recalled. “It was up to me to save the life of the mothers, if there was no other way, than by destroying the life of their unborn children.”

She made a vow: never again would there be a pregnant woman in Auschwitz.

Perl was not alone in coming to this conclusion. Medical ethics have long held that when a pregnant woman’s life is at risk, a physician must prioritise saving her life over that of her unborn child. Doctors adapted this lesson to the camps, says Sari J Siegel, a historian who examines resistance and coercion in the lives of prisoner-physicians. “We prisoner physicians quietly acted in accordance with this regulation,” wrote Lucie Adelsberger, a doctor who also performed abortions in Auschwitz. “The child had to die so that the life of the mother might be saved.”

In this case, the threat to the woman’s life was genocidal rather than medical. In their quest to create a master race, the Nazis explicitly singled Jewish women out as targets of extermination (simultaneously, “Aryan” women were encouraged to bear as many children as possible). In most ghettos it was forbidden for women to give birth on pain of death, says Beverley Chalmers, author of Birth, Sex and Abuse: Women’s Voices Under Nazi Rule. In the camps, the danger was even more extreme. As Perl put it: “the greatest crime in Auschwitz was to be pregnant.”

I'm unalterably opposed to abortion as an after-the-fact method of contraception.  I regard human life as beginning at conception, so normally I'd never consider deliberately aborting a child in the womb as being justified for any reason except for an otherwise unavoidable and very grave risk to the health of the mother.  (According to classic moral theology and ethical principles, under those circumstances that's not an abortion, but an example of the principle of "double effect".)  Yet . . . under the circumstances prevailing in Auschwitz, one can't look at it in such black-and-white terms.  No matter what choice Dr. Perl made there, evil would result.  It was guaranteed.  She therefore had to choose the least evil among the alternatives available.

Dr. Perl wrote about her experiences after the war in a book titled "I was a doctor in Auschwitz". 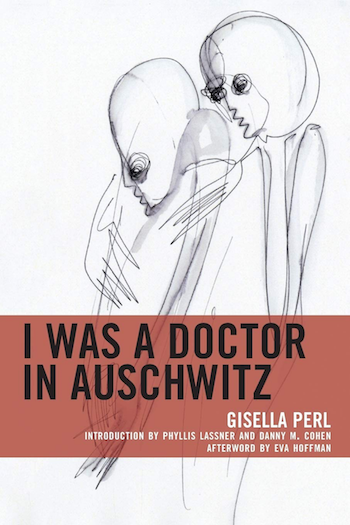 Her story is an epic of courage in the face of the worst possible adversity.  Both the article excerpted above, and her book, are highly recommended reading.

“ I regard human life as beginning at conception, so normally I'd never consider deliberately aborting a child in the womb as being justified for any reason except for an otherwise unavoidable and very grave risk to the health of the mother.”

This fits within your moral framework. Quite literally, the child in the womb would result in the death of the mother.

As long as humans exist people such as this will exist, because evil exists.
I have heard "So that this cannot happen again..." regarding so many acts of barbarity that believe evil will exist as long as humanity exist.
"I will meet you in Jerusalem." is, perhaps, the best we can do when overwhelmed by evil.

The Marxist/Facists in the streets now are an infection of evil in our civilization.
The principle of"double effect" maybe necessary to save the patient from this infection.
Let us hope that the body politic will heal itself without intervention to save it.

Not an easy subject to write about. Thank you for your gracious handling of the post.
I do not think it off topic to recommend Gorecki's third symphony as an extended meditation on the subject. The soprano voice of Dawn Upshaw has an emotive content that will tear at your heart. https://www.youtube.com/watch?v=87DJF1_vwQA

I have always looked at abortion in a similar way. I am a Christian, and I believe in our right to self defense. So if the life of a pregnant mother is in danger, by carrying the baby to term, then it might, in certain instances, be necessary to abort that life. It is always a sad and tragic thing to lose a child before birth.
I read a book when I was perhaps 10 or 11, called Medical Block Buchenwald,by I think Walter Pollack. It was basically what it sounds like, a history of the experiments carried out on humans in the concentration camp of Buchenwald. I know, that is a young age to read such a book. It is not a book to read without being ready for it, as it can really hit you hard, if you are not in the place that you need to be emotionally.
Once I learned to read, I read anything I could get my hands on. And my parents had a fantastic library of books to choose from. Steinbeck, Ernie Pyle, Norman Mailer, etc., I grew up reading things from these great authors. I read the dictionary, a complete set of encyclopedias, the King James Bible, literally anything they had.
They had some high school level literature books that I read. One of them had a story in it about a man who dropped out of college to work in a steel foundry. His name stuck with me, and as hard as it is to believe, when I went to work at the place where I spent my life working, there was a guy there with the same name, not a common name, by any means.
I remember such books as Papa Married a Mormon, Life with Father, Guadalcanal Diaries, This is Your War, The Naked and the Dead. Dozens of Readers Digest condensed books. Kon Tiki, by Thor Hyerdahl. I have said that once I learned to read, I didn't need school for anything except for learning to play music and sports, both of which I had some talent at.
I fear that things are heating up in America right now to the point where we could see major battles between various groups of different sides of some of the issues. If it happens, it won't be pretty and it won't be easy to stop.