Saturday Snippet: Situational awareness can save your life 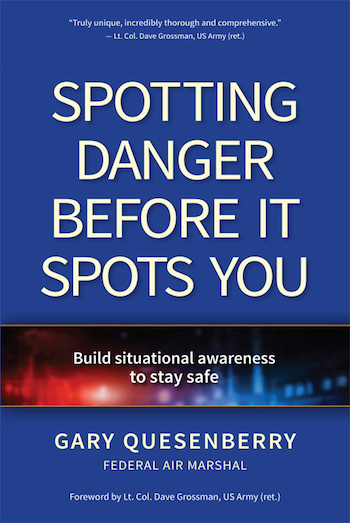 In today's troubled times, situational awareness is more important than ever.  I'm astonished to see so many people (particularly younger people) walking down the street, heads lowered over their smartphones as they text back and forth, totally ignoring the world around them.  They even step off sidewalks and cross streets like that, never lifting their heads to check for oncoming traffic!  I've had a couple of close encounters with such idiots while driving.  When you honk your horn at them, they jump in fright, then look at you as if it's all your fault - and if you'd been unfortunate enough to hit them, that's what their lawyers would claim when they sued you, even if the fault was all their clients'.

In a situation where urban unrest, riots, demonstrations and the like may occur nearby, we need to be on the lookout for them, and prepared to take evasive action when necessary.  This book is a useful tool in learning how to do that.  I've excerpted some of the first two chapters as a sampler.

Situational awareness is the ability to identify and process environmental cues to accurately predict the actions of others. This requires us to be familiar with what is known as baseline behaviors (those actions that are considered normal in any given environment). By knowing what is deemed to be reasonable and appropriate, we can more easily spot the people that seem out of place and raise our suspicion. Then we can evaluate that person’s actions, and with practice, accurately predict their behaviors. This is how situational awareness works, and it allows us to get the jump on dangerous situations so that we can respond appropriately. We’re going to go into greater detail about these things later on, but there are a few points I’d like you to keep in mind as you read.

These are trying times, but in the end, we’ll all get through it. Keep in mind that as we progress along the road to situational awareness, the next threat to our safety could be just over the horizon, and no one knows what shape that threat may take. No matter what other people may throw at you, be it a criminal or Mother Nature, you must maintain your concentration and keep focused on the end goal, ensuring the security of yourself and those you love. It’s a big crazy world out there, and things are always changing. Stay safe, and always keep your head up.

My goal here is to take what’s relevant in the world of situational awareness and personal safety and boil that information down to its simplest terms, which can then be easily implemented in your daily life. The techniques and exercises I’ll have you practice work for everyone—parents, small children walking to school, teenagers going off to college, and whole families headed out on summer vacation. It works universally. When properly applied, this system of situational awareness will help improve your general understanding of how, when, and where violence occurs. It will also increase your chances of successfully detecting and avoiding danger no matter where in the world you may find yourself.

Real situational awareness requires a shift in perspective. It’s not enough to just walk around in a state of hypervigilance, thinking that nothing within your line of sight will go unnoticed. You have to be able to see yourself and others from the perspective of a predator. This isn’t easy for a lot of people. For the most part, we all want to see the best in others, and the fact that someone else could possibly view us as a target of opportunity is hard to imagine. The unfortunate truth is that there are predators among us, and unless we can change the way we think, we may look like easy prey without even knowing it.

To better understand predatory behaviors, let’s start by breaking down and categorizing the different types of predators and their basic motivations. In his book, Facing Violence: Preparing for the Unexpected, Sgt. Rory Miller breaks down predators into two groups: resource predators and process predators. 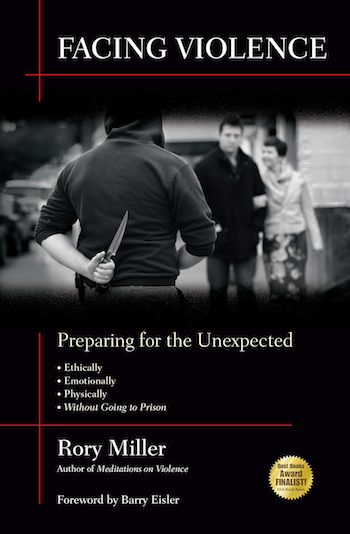 A resource predator is looking for tangible items, be it cash, jewelry, or even your shoes. They’ve decided they need something and they’re going to take it from you. Predators in this category include your basic mugger, pickpocket, or burglar. In some cases, if a resource predator confronts you and you just give them the thing they want, they go away.

Process predators, on the other hand, are much different. Process predators aren’t interested in your watch or wallet; they get off on the act of violence itself. This category of predator includes the likes of rapists and murderers.

Motivations of the two categories of predators can vary, but violent behavior is primarily driven by one of four things: money, ego, territory, and emotion. Let’s take a closer look at each.

That's a small sample of the sort of things you can learn from this book.  It's all useful stuff, and important in today's world.  It's particularly important because the system of justice in many states and cities of our nation has become politicized.  Those with certain political views and/or skin colors are likely to be treated a lot more harshly than those with others, and if the "wrong" color or politics is involved in a violent incident - no matter how justified their self-defense may be in terms of the letter of the law - they're likely to face a very vengeful prosecutor, out to prove that "his" or "her" people couldn't possibly be the guilty party(ies).

Given that legal fees may run into the tens of thousands of dollars, plus all the aggravation in having to defend oneself against charges that may be baseless, but will nevertheless be splashed all over the news media, we can see that avoiding this post-conflict conundrum may be even more important than recognizing potential conflict itself, in time to avoid it.

By "wrong color" he means white, in most jurisdictions. Definitely all the Democrat controlled ones, at least.

@McChuck: No, I don't mean white. Kindly stop putting words in my mouth. There are some areas where having a white skin can lead to the consequences I described. There are others where having a black skin can have the same effect. It all depends where you are, and the political, social and cultural environment in that place or area.

"Listen to the Gut" your subconscious. it picks up on things that the concious minds doesn't immediately home on. You get this strange feeling in the back of your mind, the "Itch" that doesn't go away....There is something to that. I will check out the book though.

Also the classic: The Gift of Fear by Gavin de Becker

Concur on Left of Bang. And being the 'wrong color' is not specific to black, white, hispanic, or asian... Each environment is different and you 'can' get in trouble simply by being in the wrong place at the wrong time.

In growing up on the small side of normal, I developed early on a good nose for trouble, and I'm gone before it starts. Thanks for the links and references one and all; I'm most partial to Col. Jeff Cooper's take on the subject.
I worked for 38 years in a "gun free zone", a major medical center, and I'd have been fired if caught carrying at work. I used to tell my co-workers that I had a very bad attitude about it. If I was to hear "pop-pop-pop" anywhere nearby, don't count on me for help. I'm GONE. I would vanish without even the cartoon puff of smoke.
If ever left without options to exit, I will definitely take the attitude of a cornered cat: "Mr Mugger, you may hurt me, but it's going to ruin your day too."

Oh, and check out Rory's "Meditations On Violence"
He has been there and done that.

+1 for Meditations on violence. As a side note, my daughter found that reading that discouraged unwanted attention from fellow passengers while traveling to and from university. The only person to continue a conversation with her was a fellow Krav Maga practitioner.