Organizing the riots, fake news, and other matters


It seems that the organizing effort behind the current, allegedly "spontaneous" riots is extensive, well-planned, and very well coordinated and equipped.  More and more evidence is coming to light.  As just one example, here's part of their instructions, dropped by a riot organizer and publicized on Twitter.  Click the image for a larger view. 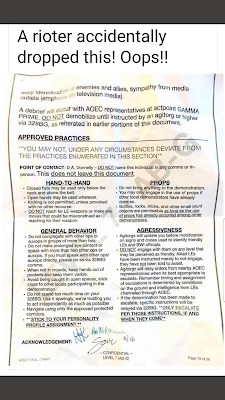 Note that every page has to be initialed by recipients, and strict discipline is imposed on them.  I ran that image past my law enforcement contacts in a few states and cities.  Several replied that they'd seen the same sort of thing in their areas.  One pointed out that the handout shown above was 26 pages long, and that enough other pages had been found in various places (mislaid, or on the person of arrested organizers) to reconstruct almost the whole document.  The radio frequencies and encryption used by the riot coordinators are also known by now, and interceptions are happening in real time.  There's a massive effort underway to coordinate intelligence and information, in the hope that this will lead to a crackdown on those responsible.  It can't happen too soon for me!

Be aware that much of the news about these riots is false.  Many in the mainstream media are deliberately tailoring their output to reflect the "party line", shooting TV footage from specific angles to maximize the social justice perspective and minimize the thuggery.  Quotes are selective, images unfavorable to the politically correct narrative are simply not used, and reporting is biased in the extreme.

I'll give you just one example of biased reporting.  Here's a headline from BET (Black Entertainment Television) yesterday:


Sounds terrible, doesn't it?  How could those brutal, heartless police kill such a wonderful man?  Well . . . turns out the reality was rather different, as Fox 19 reported (also yesterday).


You'll find other reports out there.  They agree that at least two surveillance cameras, at different businesses, showed Mr. McAtee firing at police before they returned fire and killed him.  Compare and contrast the two headlines.  Which sounds closer to that reality?  Which report is more accurate?  (By the way, the same information was available to both outlets before they published their articles.  Note what BET left out!)

The problem is, most BET viewers and readers will never see another report from a different perspective.  They'll be outraged by what they perceive - what has been implicitly portrayed - as police brutality.  This, I suggest, is precisely the effect BET journalists and editors are trying to achieve.

I wouldn't trust a single report about the rioting in the mainstream media.  I'd check, double-check and triple-check everything, using input from all sides of the political and media spectrum, before making up my mind.  News - accurate news - is too important to be left to journalists and editors, who have all too often proved to be biased, dishonest and corrupt.

I think the ever-thought-provoking Heather Mac Donald has the best input on what we're seeing on our streets.  Bold, underlined text is my emphasis.

Savagery is spreading with lightning speed across the United States, with murderous assaults on police officers and civilians and the ecstatic annihilation of businesses and symbols of the state. Welcome to a real civilization-destroying pandemic...

This pandemic of civil violence is more widespread than anything seen during the Black Lives Matter movement of the Obama years, and it will likely have an even deadlier toll on law enforcement officers than the targeted assassinations we saw from 2014 onward. It’s worse this time because the country has absorbed another five years of academically inspired racial victimology. From Ta-Nehisi Coates to the New York Times’s 1619 project, the constant narrative about America’s endemic white supremacy and its deliberate destruction of the “black body” has been thoroughly injected into the political bloodstream.

If white mobs were rampaging through black business districts, assaulting passersby and looting stores, we would have heard about it on the national news every night. But the black flash mob phenomenon is grudgingly covered, if at all, and only locally.

The national media have been insisting on the theme of the allegedly brutal Minneapolis police department. They said nothing as black-on-white robberies rose in downtown Minneapolis late last year, along with savage assaults on passersby. Why are the Minneapolis police in black neighborhoods? Because that’s where violent crime is happening, including shootings of two-year-olds and lethal beatings of 75-year-olds. Just as during the Obama years, the discussion of the allegedly oppressive police is being conducted in the complete absence of any recognition of street crime and the breakdown of the black family that drives it.

Once the violence began, any effort to “understand” it should have stopped, since that understanding is inevitably exculpatory. The looters are not grieving over the stomach-churning arrest and death of George Floyd; they are having the time of their lives. You don’t protest or mourn a victim by stealing oxycontin, electronics, jewelry, and sneakers.

Finally, in response to several queries from readers following my two articles on Monday, I remind you that last year I published an article titled "An interesting look at urban defense".  It contains links to several other articles on the subject.  All are thought-provoking and worth reading.

As I understand it, food delivery truck drivers are stating they will not deliver to riot zones - and understandably so.

From there, food shortages and hungry people will result - and boil out looking for food (kind of like the rats are in many cities).

And then the Dems will "step up" to make a deal with the desperation of these people. GIVE US POWER AND WE'LL FIX THIS.

I am not sure you need Sherlock Holmes on the case to ask where pallets of bricks originated from or who is behind signing the paychecks for people bused in to cause trouble.

I’m amazed at the Level of Organisation.

Why are you using an image from a 2 year old info wars article and claiming it is current?

Because it's being used? Pretty sure that's what I read. Just because it's 2 years old doesn't mean it's not relevant.

Heather Mac Donald is blocked on faceless book. They won't let me share the article on my phone.

Scary times I never thought I'd see in America.

More and more, the Ahmed Aubrey case is looking to be the 'test run' for the next big flashpoint. The instigators learned where they went wrong (not jumping off quick enough and letting the 48 hour cycle - the truth always comes out in the last few hours from 48 hours of breaking news, and not having their preps pre-staged.)

Now we have credible intel that preps were pre-staged, fake outrage scripted, people recruited and ready to go.

So a sad stupid death during arrest - not death-by-cop, not at all, just death-during-arrest - big difference, was the spark. All the rioting and looting and burning got kicked off within 24 hours.

It's a shame it took burning cities to do it.

And notice, no body is talking about Slow Joe anymore. Or the DNC primary and who is going to slide into the Presidency as his VP or who will take over the nomination 'for the good of the party.' (Still thinking Michelle will be the one. Too much... weirdness about the media attention on her and her husband...)

Will be interesting to see if martial law is ever declared in the cities, or see how quickly the riots go away right before ML is ready to be declared. That will be something to see and track, as who can stop the riots is the one who controls the riots.

@Unknown: The tweet containing that image was dated May 31, 2020. I don't know of an earlier version. My police contacts have said they've seen similar documents during the current unrest; therefore, even if it's very similar to an earlier version (which I don't know), I reckon it's accurate. YMMV, of course.