That was a heck of an explosion!


While Wikiwandering the other day, doing research for a forthcoming book, I happened upon the account of SS John Burke, a Liberty ship built during World War II.  Her sister ship, SS John W. Brown, one of only two surviving Liberty ships that are still seaworthy, is shown below to illustrate approximately what she would have looked like. 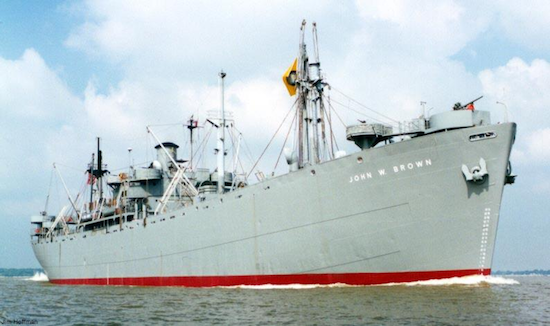 Liberty ships could carry over 10,000 tons (deadweight) of cargo, and were used throughout the world.  2,710 of them were built.

On what would be her final trip in late 1944, Burke departed Seattle, Washington for Guam, where she spent several days loading munitions for the invasion force on the island of Mindoro. Burke then departed with the 100-ship "Uncle Plus 13" convoy, bound for Leyte in the Philippines. The convoy arrived at Leyte the night of December 27.

Japanese forces were alerted to the convoy's arrival shortly before daybreak on December 28. A flight of six Japanese kamikaze fighter/bombers was sent up from Cebu Island shortly after dawn. If the convoy was destroyed, the U.S. forces on Mindoro would be cut off from their supply line.

That morning Burke and the other ships in the Mindoro-bound TG 77.11 (under the command of Captain George F. Mentz) were at general quarters shortly after receiving the dawn weather report that reported that air cover would not launch until the poor weather cleared. The crews began their wait for the inevitable arrival of Japanese aircraft.

At about 0815 hours, the first kamikaze appeared on the American ships' radar, and orders were immediately given for the convoy to begin evasive manoeuvring. Through holes in the clouds, the Japanese pilots sighted the large American force as it steamed through calm seas south of Cebu and Bohol Islands. The Japanese aircraft were three A6M Zero fighters of the 201st Air Group, which had taken off from Cebu at 0950 and were led by Lt. Masami Hoshino. Each carried a 250kg bomb. As they began their attack, one of the pilots chose John Burke as his target. Diving through heavy anti-aircraft fire, the Japanese pilot had no intention of pulling out of his steep dive. At 1020, despite the damage to his aircraft, he crashed between Burke's #2 and #3 cargo holds.

A brief flash of fire was visible to most of the ships in the convoy, and for several seconds, only smoke could be seen billowing from her hold. A few seconds later, a huge pillar of fire shot out of Burke's cargo hold, followed by an immense cloud of white smoke. Within seconds all eyes were drawn to Burke where an enormous fireball erupted as her entire cargo of munitions detonated, instantly destroying the ship and killing her crew of 40 merchant marine sailors and 28 or 29 armed guards. For several seconds, Burke was not visible under an enormous mushroom cloud of smoke, fire and explosions. Several ships nearby were damaged by the force of the blast and flying fragments. The shock wave rocked the entire convoy, and several ships reported that they had been torpedoed. A US Army "FS" type ship just aft of Burke was severely damaged by the blast, sinking before it could be identified. As the cloud of smoke cleared, nearby ships closed on Burke's former position to search for survivors. It was soon clear that Burke, and all men aboard her, were gone.

Film of the explosion that destroyed SS John Burke was recently restored.  Here's the new version.  It's pretty spectacular.

That was a cargo of about 10,000 tons of explosives blowing sky-high.  Most of those aboard probably never knew what hit them.  It's a graphic illustration of how merchant seamen, as well as US Navy personnel, were in danger during the war at sea.  Violence and destruction spared no-one.

May all who died aboard the SS John Burke rest in peace.

Pretty much the definition of that term....

That's USS Burke not Brown. The Brown is docked in Baltimore.

And remember that video when people suggest that sending that back to Hiroshima a few months later was an unreasonable response.

@Wolff: Fixed it, thanks.

Reminded me of two disasters:


I highly recommend the book titled "The Port Chicago Mutiny: The Story of the Largest Mass Mutiny Trial in U.S. Naval History"
https://www.amazon.com/Port-Chicago-Mutiny-Largest-History/dp/1597140287

Another large explosion was the mushroom cloud of Roi-Namur. Seems either some enterprising Marine tossed in a satchel charge or some sharpshooting sailor planted a large round into a fully loaded torpedo magazine.

See also the explosion of the U.S.S. Mount Hood on 10NOV 1944.
While this was not the result of enemy action, it was in theater of combat. The blast was terrific and resulted in severe damage to other ships. The Mount Hood was an ordnance carrier.

That was an amazing video and I'm surprised I never saw it or heard of it before. They were a tough bunch.

Novelist Alistair MacLean always championed the role of the Merchant Marine in WWII. He felt their heroics, especially in the north Atlantic were often overlooked.

I see some else has also mentioned the post-war Liberty ship mishap at Texas City. 2200 Tons of Ammonium Nitrate exploded while the ship was docked. 581 deaths, 2 ships sunk, and warehouses and refineries set on fire. The ship's 2 ton anchor was thrown 1 1/2 miles.

And even before that was the 1917 explosion of a cargo ship carrying high explosives in Halifax, Nova Scotia. This one was the result of a collision.

sysadmin described an excellent example. Ammonium nitrate, BTW is a low explosive (blast/heave), no HE.

Point of information: the ship contained perhaps 4-5 kt of actual HE, wrapped in bombs, projectiles, and the packaging needed for safe(r) handling and transport. 10 kt scales as a power function, not linearly. The kt equivalent is made by detonating large assemblies of TNT, carefully placed, primed, and wired for simultaneous explosion so the stacks don't scatter. Above a certain amount, the crater size and cloud produced all look like a large, 'smooth' crater and a debris cloud with an initial burst lofted on a thermal stem as inrushing air gets superheated. The mushroom cloud becomes visible at about a few hundred pounds, becoming more obvious as the size or yield rises.

St. Barbara, patroness of those who work with explosives and ordnance, pray for the repose of all their souls.