Seattle: what did I tell you?


Yesterday I wrote that Seattle has abandoned the rule of law.  It's allowed protesters to set up an "autonomous zone" in a six-block area of the city, and pulled police out of it.  I warned of what was likely to occur - and guess what?  It's already happening.

Headlines that tell the story:

Lawless In Seattle:
All That CHAZ


There are already reports of violence being used to "enforce order" by local vigilantes, and that "some demonstrators on Capitol Hill are armed and trying to extort protection money from area businesses and residents".  The protesters who've "taken over" (only to have their "control" hijacked by thugs with guns) are learning that "an armed and organized element with leadership that isn’t afraid to use violence pretty much trumps all the slogans and antifa bullsh** you can spout."  Say it ain't so!

That's what happens when you negate the rule of law.  Inevitably, the law of the jungle takes over.  It's survival of the fittest and strongest.  Bring them food, or be food for them.  Chairman Mao said it well:  "Political power grows out of the barrel of a gun".  The halfwits who proclaimed the "Autonomous Zone" are re-learning that lesson - and not just about power, either.  They're also learning that if you try to help them, the grasshoppers will rob the ants blind. 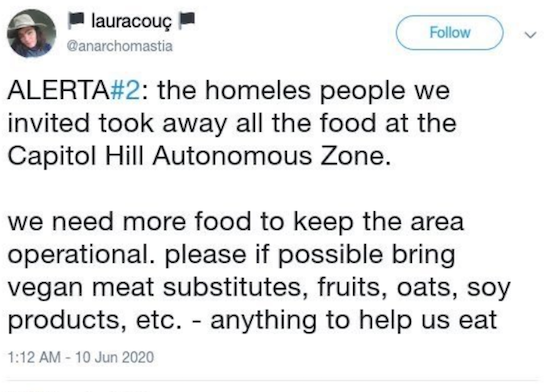 They want food, do they? I have a suggestion. Let's each of us buy a packet of frozen peas, and transfer the contents to freezer containers so we can use them at our leisure.  Then, let's mail the empty frozen-pea packets to the organizers of the Autonomous Zone (or perhaps to our local Antifa branches or Democratic Party offices), with a note reading "No Justice, NO PEAS!"  I think we should make that go viral, so they're inundated with empty pea packets.  It's no better than they deserve.

What about Seattle's police force?  Their city leaders won't allow them to do their job.  Therefore, those individual cops who still have a spine, and at least some professional pride, should resign from Seattle PD and take their services to places where it'll be appreciated and properly used.  The others should follow the well-known precept of "Lead, follow, or get out of the way".  They're not allowed to lead, and they have no effective leader to follow, so they should get out of the way and let citizens defend themselves - because it looks like nobody else is going to do it.

I said yesterday that "I'm a pastor and chaplain, and have my own perspective on what's happening - which does not involve violence unless in defense of my life, family and property."  Getting rid of thugs with guns who are threatening me, and refusing to be intimidated into contributing to their support, most certainly falls under that defense, IMHO.  I think it's time the good citizens of the "Autonomous Zone", and of Seattle as a whole (at least, those who haven't been brainwashed into abandoning their rights and responsibilities as citizens), banded together to reassert their own authority, and show these idiots where to go.  If necessary, assist them to get there.

After that, elect or appoint city and state authorities who'll preserve the rule of law in future.  I don't care what you do with the old ones.  They're utter failures, and deserve no consideration at all.

vegan food
How much more stupid can you get? " We are desperately hungry, but we are still so special we require only certain foods. " Never imagined it might go this way, did you?

If you survive this, I hope you come away with an understanding that the world will not cater ( no pun intended ) to you. You are the one who needs to embrace reality.

"What about Seattle's police force? "

Unless they took all the computers with them that access to all the HR files has already been achieved (if they don't already have sympathizers inside the department) and you can look forward to the fun times of identity theft. If you're working under cover you'll be outted soon. Not to mention all the evidence kept in the building, what ever firearms and ammo we'ren't taken out by the enlighted administratio of the city. Most important of all is the symbolism. "We're winning! They're running!" Look who is in control now. They have members of both houses of congress and dozens of Fortune 500 companies joining in now. That has to play well on an audience already prepped to reject any of America's traditions.

Let me get this straight; a Warlord has taken over CHAZ because he has guns. He then promptly starts shaking down the small business owners for money. Supposedly to run things, but I woke up with the Kipling poem about the Dane-Geld running in my head.

In a way, this is really comical. They set up this Autonomous Zone and clearly couldn't run a household let alone a city. No food supplies, no water supplies, no sewage removal, no garbage disposal, no infrastructure at all, and no way to pay for it. Every utility should shut down the area, at least as much as they can, and then start negotiating rates. They'll be a failed state wallowing in filth within days.

Like the commies in Russia, China, Cuba, or Venezuela, or the rioters in Zimbabwe or South Africa, or a hundred other places, they know how to run a rebellion and break shit but couldn't manage a MacDonald's with every aspect of the supply chain intact.

So someone with guns took away their fantasy land. Someone that smelled worse then them took away all their food. Someone with more common sense will be needed to straighten things out.

They want their autonomous zone? Fine. Let 'em have it. Cut the water and electricity. Seal it off. No one and nothing comes in or goes out.
Give them just what they asked for for two or three weeks. The problem will take care of itself.

The anarchists are running the zoo, the lions are hungry and
they want soy...

Last time there was a takeover, Philly if memory serves there
was a fire and no fire department.

The world knows to have a viable "country" you need to pick up the shit, put out fires, and stop thieves. Pretty basic stuff for those educated. To do that you pay people in food, goods, or money. That means you have to tax the peasants to pay that. Next thing you know your a village, town, or city.

Anarchists cannot support that as its is anything but...

Idiots, they don't want what they must have and the result is fail.

Today: Please send vegan meat substitutes.
Next week: Hey, what happened to all the cats and dogs?
Shortly thereafter: Shhhh, don't scare away that rat!

Hopefully they will have a moment of clarity. You know, there's a reason that the systems of government and law enforcement exist and have evolved as they have.

It's one thing to mount a crusade to save the world. It's yet another to run the boring day to day affairs.

Unlike them, the rest of us have read a bit of history and know how these things always, always end up. I guess it's all fun and games until the homeless dudes steal your vegan fare, and thugs appear to boss you around worse than the fuzz.

1. Actually, control of the evidence rooms is going to screw a lot of very serious investigations, as tampered evidence is the same as no evidence. Expect to see a lot of really bad dirt-bags to be released as non-prosecutable. Especially murders, assaults, and so forth. Dammit.

2. How to destroy CHAZ. Line the area around CHAZ with BBQ foot trucks and people openly cooking bacon and roasts and chicken and turkey and fish and anything meat. Let the smells waft over the poor CHAZlandia. Stage a month-long MEATFEST. Sausages, beer, BBQ, bacon, beer, sausage, beer, roasts, bacon... Remember: Meat is MURDER. TASTY TASTY MURDER. Mmmmmm... (and a note, my peeps and I have used these techniques against protestors at a medieval fair before. Nothing says happy-happy as eating turkey legs while making fun of the soy-people. Yum... roasted turkey legs, burgers, roasted bratwurst, smelly, greasy meat.. yeah, meat as a terror weapon...)

Can we give 'em frozen peas one at a time, via wrist rocket?
--Tennessee Budd

I had some...alternative thoughts on CARE package contents.

I dont think theres but one answer... send in troops to take honest folks out, set a SOLID perimeter, and cut all utilities off... how long can they go, with no way to charge their cell phones? No food, water,electric... put them under siege. Shoot arsonists on sight.
Neville Chamberlain showed us the cost of appeasement, it nearly cost us the free world. Never Again.

Well if it's no longer part of the USA, that makes it territory occupied by a hostile power? Should do with them what you should be doing to the Sovereign Citizens - inform them just what type of authority it is that guarantees the independence of a sovereign nation.