Forget the "new normal" - nothing is "normal" any more


Joe Andrew has a trenchant thought about change and human progress, which is particularly applicable to the ongoing riots and protests sparked by the death of George Floyd.  They are only one facet of a deep-seated societal change that's happening around us as we speak.

Traditionalists want to get the world back to normal. Modernists want to get the world to the new normal. What they are both missing is that there won’t be a normal — the old one or the new one — for a long time, if ever ... We cannot expect that all things around us will be typical or expected if they are changing faster than we can adapt to them.

But more important than any substantive trend is this process point: acceleration is accelerating itself.

... with the advent of the easy to use smart phone and the underlying democratization of ideas that came from it and wide use of the internet ... change in most areas dramatically began to accelerate around 2008 ... Our very ability to adapt to all the change happening around us was the key trend of our time.  If the crisis created by COVID-19 is accelerating trends, then it is clearly accelerating the trend of increased change.

The age of cellular service coincided with the beginning of ... a Fourth Industrial Revolution that has brought the mechanical, biological, and digital sciences together and where the speed of current breakthroughs has no historical precedent. Changes in medicine, physics and technology are evolving at an exponential rather than linear pace. You can make fun of these concepts, but that laughter is hiding the anxiety that we are feeling as we experience the quickening pace of change all around us in the real world ... and we — as individuals and societies — are struggling to react. And that was before the current global crisis.

Those who are in the business of predicting what will happen next ... were often too conservative about the rate of change before the current crisis. As change accelerates, we are learning something about the world that lies in wait for us. We are learning that there will not be a next new normal, but rather a new dynamic.

Our biggest challenge will be to adapt to this dynamic and find ways to live in the moving river, not beside it, as it overflows its banks and swamps our expectations of what is normal.

While we never know what will happen next, we now know that the challenge of our times is how we adapt to what happens next.

That article brings to mind a book by Martin Gurri, a former CIA analyst, titled "The Revolt of the Public". 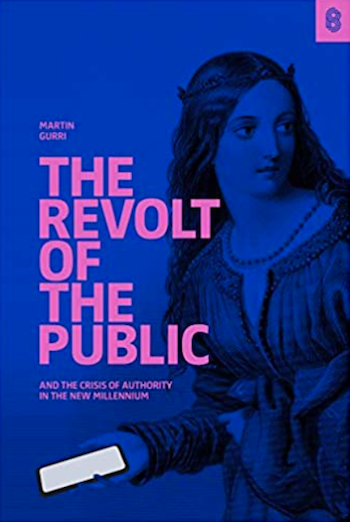 In a recent video interview, he spoke about his theory.  It's only about ten minutes long, and well worth your time.  If you prefer to read rather than listen, he covered the same material in a recent podcast, the transcript of which is here.

Increasingly, the post-truth landscape has come to resemble a science fiction nightmare.  In a fractured universe, multiple “spheres of truth” reach blindly for domination – but when they collide, every claim for every truth is nullified, and nothing is validated.


I think that's a particularly useful insight in relation to the riots and protests going on all over the country right now.  Both sides are sticking to their version of the "truth", ignoring the factual, empirical truth that should transcend mere opinions and perspectives.  Both sides have lost sight of that.  They insist on their interpretation of "the truth", and refuse to listen to any others.  That's leaves no room, no foundation, for agreement or reconciliation.

The current riots in America certainly echo the disruptions of the so-called "Arab Spring" in the Middle East.  Those failed, spectacularly so in many countries, as a conservative, traditional reaction to their excesses set in.  Will the riots here "fail" too?  Or will they gather momentum and produce lasting change?  Your guess is as good as mine - but the conservative, traditional reaction has hardly begun in this country.  Some believe it will express itself at the ballot box in November.  Are they right?  If so, will the progressive forces on the left refuse to accept that outcome, and riot all the harder?  And will that produce a crackdown on them from the right?

It's worth repeating Mr. Andrew's observation:

Our biggest challenge will be to adapt to this dynamic and find ways to live in the moving river, not beside it, as it overflows its banks and swamps our expectations of what is normal.

While we never know what will happen next, we now know that the challenge of our times is how we adapt to what happens next.


That's going to be a monumental challenge for all of us as individuals, and for our country as a whole.  Frankly, right now, I'm not very hopeful that we'll find a peaceful way forward.  It may be that things have already gone too far for peace.  Perhaps the spark to a general conflagration has already been lit.

I hope and pray I'm wrong.

Pick a side, or sit on the fence and watch the show go by. Truth no longer matters in the slightest. Our enemies revel in hate, lies, villainy, and violence.

Part of the problem is our leaders are not leaders. They are not saying follow me, but they are saying do as I say, not as I do. The information age is exposing hypocrisy and greed of the ruling elite, and people are getting angry. Black Lives Matters may be angry, but so are white middle class and everyone else.

People who are under pressure will go back to the behaviors that brought them early success. Our elites have not made the shift to the digital age (with the exception of Trump). No one on the left wants to deescalate, to them it is all about power. There are not enough conservatives willing to stand up and fight. Neither side can seem to work with the human beings who are not perfect.

In the old west many of the Sheriffs who helped bring law and order had been criminals. When there is a shortage of saints you go to people who will get the job done, but the good people don't do it themselves.

If you think things are bad now, wait until August as we begin gearing up for the election, and wait until Nov 23 the day after Trump wins. The battle lines are drawn, all that remains is for Ft. Sumpter to fire the first shot. (We are not in open war yet, Ft. Sumpter has not happened yet)

Notice a government of the people, by the people and for the people has done everything possible to limit the right of self defense and has demonized it. Now the police are being legitimized. Joe average is going to face the same problem police officers face, if I fire in defense of my family am I going to be lynched. Many will not act in self defense because of this. Chaos and disaster to follow.

Unless Trump can start cutting the head off of the snake asap I don't believe we will be able to deescalate in time.

When my wife had her cancer, 23 years ago, we kept hearing how new treatments kept coming along and chances got better every year. The problem with that is that it always takes five years to get the five year survival rate.

If someone is honestly trying to change laws or society, it takes time to tell if those changes are working, too. People act like they think if they scream loud enough they can change their world in "internet time". I guarantee if they make a change, they won't see the differences overnight.

All the smartphones have done is make people less patient.

I've been engaged in a great debate with the author of this series:

Anyway, one of the things we've been discussing is the difference between OBJECTIVE TRUTH and SUBJECTIVE TRUTH.

Consider as an example: a person on LinkedIn whom I know in real life. That person is INSISTENT that Trump said it was OK to inject disinfectants, and said GO WATCH THE VIDEO. Well, I've seen the video - as have many, many others who like me do not agree with that interpretation what what transpired. Yet this person literally cannot accept that others might, and DO, differ from what they think.

All sides are speaking English but we're talking different languages based on our assumptions. We no longer give the other side the benefit of the doubt. We no longer seek out different points of view to mix them together with views on our side to determine, as imperfectly as we can, where Truth is.

I only see one side doing this:

Both sides are sticking to their version of the "truth", ignoring the factual, empirical truth that should transcend mere opinions and perspectives.

Actually most Of the other side is cowed, and terrified of being accused of wrong think - racism / sexism etc. do much gas lighting going on.

And the latest - silence is violence is terrifying.

Lately, I'm thinking that the odds of Larry Correia's Switch making it to the November election unflipped is looking worse every day. "interesting times" for sure.