Did the Viking Age begin 2,000 years earlier than we thought?


The BBC has a very interesting in-depth look at new archaeological and other discoveries, suggesting the existence of what it calls a "first Viking Age" starting about 3,000 years ago in Norway.

People who lived in Norway 3000 years ago were far less primitive than many have imagined. They were not hunters who still lived a Stone Age kind of life.

The ships built by Norwegians, Swedes and Danes during the Bronze Age may have had a crew of over 50 men. People from Scandinavia went to England in ships like these. They probably made their way down the great rivers in Europe.

They may have used the ships to travel to Finnmark in northern Norway.

And perhaps to Italy in the south.

Today archaeologists know that ships, houses, weapons, clothing and many other things from long ago look very much like similar objects from the Viking Age. People primarily used bronze and gold when they needed metal. The Vikings also used iron.

Shipping, trade, animals and farms, violence and looting, the construction of large burial mounds, and large-scale sacrifices involving jewellery and weapons — all these from the Bronze Age, 3000 years ago, are surprisingly similar to what we think of as the Viking Age. At least that is the picture that archaeologists are now starting to put together.

“Bronze Age and Viking Age societies in the Nordic countries were very similar,” Kristiansen says. The most striking resemblance was that both were maritime societies.

An amusing fact is that the first Norwegian researchers who took an interest in the ships found in petroglyphs thought that Vikings must have carved these images.

It was excavated in 1921 from a wetland and is very similar to the vessels that are depicted in petroglyphs. The Hjortspring boat is the only example known from the Nordic region of a fairly complete vessel that dates almost from the Bronze Age.

The Hjortspring boat was found with weapons and equipment for many soldiers. Therefore, it’s safe to conclude that it was a warship.

The Hjortspring boat had room for ten paddlers on each side and the vessel had a steering oar at each end. Thus, the vessel probably had a crew of 22 men.

This was a light vessel where most of the strength lies in the frame. The wooden planks on either side are laid over each other and sewn together. Thwarts give the vessel stability.

It’s clear that the Hjortspring boat derived from a long boatbuilding tradition dating from considerably earlier than 2,500 years ago. Some of the construction methods can be seen in Norwegian boatbuilding right up to today.

The boat was paddled with long and narrow canoe-style oars. A copy of the boat reached a speed of 8 knots.


There's much more at the link, examining trade routes, culture, farming and many other aspects of "first Viking age" life.  I found it fascinating. 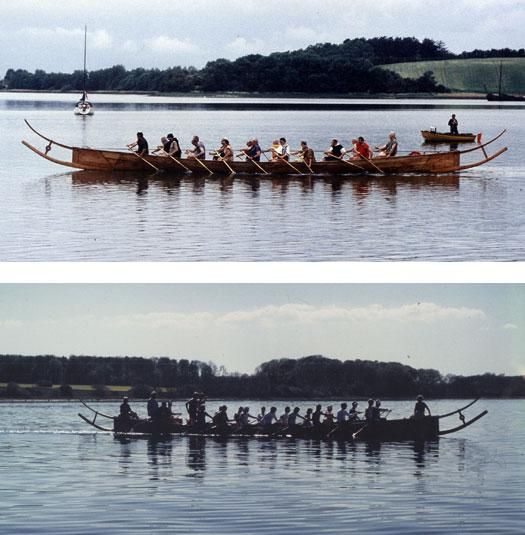 I was unable to find any video of the trials.  However, a replica of a Bronze Age boat found in Britain, one of the so-called Ferriby Boats, has also been built and tested.  It's of very similar size and construction.  Here's video of those trials.

It's fascinating to think that paddlers might have moved such craft, and traded with them, throughout much of western Europe three thousand years ago.  I think our distant forefathers were tougher men than we are!

Makes sense. That there was advanced civilization that early in Europe. And in the Norse/Danish/Scandinavian/Swedish areas.

Especially since the latest research around Stonehenge is digging up proof that the residents of the area were far more advanced than skin-covered savages as portrayed in most histories.

Actual climate related data, real data, shows that in that time frame the Earth was warmer, much like during the great 'Viking Age' which means agriculture, fishing and hunting was much more productive than during the colder pre-Viking age.

The incredible ancient finds all throughout Europe has, for years, shown that what existed at the Time of the Pharaohs and the Rise of The Greeks was far more advanced than we have been taught. Especially the Germanic tribes that fought the Romans.

A lot of the stupidity and misdirection found in our historical understandings of ancient people is from the half-baked Victorians. They kind of had a progressive scientific method, wherein the Theory was proposed and accepted and then any findings were massaged to fit the Theory.

Like stinky, poop-filled castles in the Medieval age. Um, nope. Even during the various cold spells, night soil and urine were collected and removed, first because fertilizer and the wonderful industrial uses of urine, and second, they - the medievalists - understood dirty meant disease. Not like we know it, but their germ theories worked at the macro-level.

Not too far from Blogarado is Picture Canyon. Carved in the rocks are runes, per people knowledgeable of those things.

A friend once remarked that "olden" people were tougher. I responded that the survivors were tougher, so they were the only ones we knew about.

"People from Scandinavia went to England in ships like these. They probably made their way down the great rivers in Europe."
.
Probably written by a landsman, From Scandinavia the routes into Europe are upriver. So, were the shipbuilding skills indigenous, or had they been brought north generations before, by the Beaker People or their like?
.

If you were use to hard physical labor from the time you learned to walk you would be a lot tougher. Mom could handle a two-chicken cast iron skillet with one hand and scrap the gravy out with the other. And while I am stronger than the average woman my size I could never handle that skillet with one hand. There is something to be said for being raised on a farm back in the 30's with no conveniences.

Around 3,000 years ago is when the mysterious "sea peoples" descend on the civilized Mediterranean, and civilization crashes. Are these early "Vikings" a possible answer? Be interesting to look at the DNA of the descendants of the Philistines in Israel and see if they are connected to the Norse?

We know the Phoenicians traveled to the tin mines of Cornwall. So these "Viking" ships would have had little trouble sailing to the Mediterranean.

And if they navigated through the Med, who is to say that they didn't reach North America long before their ancestors did?