There's a breathtakingly stupid piece of moonbat propaganda floating around, seeking to blame local and state government fiscal mismanagement on ... wait for it ... Mitch McConnell, the Senate Majority Leader!

The main instigator for [defunding police], of course, is the protest movement sparked by the police killings of George Floyd and other African Americans. In their efforts to reduce law-enforcement budgets, however, the protesters have an unlikely ally: Senate Majority Leader Mitch McConnell. By spurning congressional Democrats’ efforts to dispatch additional aid to state and local governments, McConnell is enabling budgetary crises in city after city. These crises, in turn, are making well-funded police departments an easier target.

Police budgets are mostly paid by local governments. And for local governments, COVID-19 has been a fiscal catastrophe. Local governments fund themselves through a combination of property taxes, sales taxes, income taxes, special taxes (on the occupants of hotels, for instance), and aid from states. By slashing consumer spending, the pandemic has slashed sales-tax revenue. The collapse of tourism has decimated special taxes paid by the hospitality industry, and job losses have reduced revenue from income taxes. Moreover, states—which face their own budgetary shortfalls—are likely to cut local aid. The result, according to the National League of Cities, is that from now until 2022, cities collectively face a budgetary hole of $360 billion.

On May 15, House Democrats responded by passing the HEROES Act, which would have allocated close to $1 trillion to state, local, and tribal governments—$375 billion of which would have gone to cities and counties. Because most states and many cities start their fiscal year on July 1, that cash might have helped local governments stave off major budget cuts.

Senate Republicans, however, oppose another large infusion of federal funds anytime soon. In April, McConnell suggested that states respond to their fiscal woes by declaring bankruptcy.

As we've covered in these pages many times, the reason state and local governments don't have enough money is that they've "wasted their substance on riotous living".  They're prodigal sons who refuse to come to their senses.  They've lavishly funded pensions for their workers, entitlement programs for their voters, and politically correct programs, outreaches and activities beyond number.  When they didn't have enough money coming in to fund their pet projects, they borrowed it.

As a result, many US cities and states are billions - sometimes hundreds of billions - of dollars in debt.  Unable to dig themselves out of the fiscal hole they've dug, they're turning to the Federal government and demanding bailouts from taxpayers all over the USA.  The so-called "HEROES Act" is nothing more than an attempt by the Democratic Party to ram that through Congress.  I'm very glad Senator McConnell has stopped it dead in its tracks so far - although, if the Democrats take control of the Senate and the White House in November's elections, I'm afraid it'll be forced upon us willy-nilly.

I think the premise of the HEROES Act, and the article cited above, is ridiculous.  I see no reason why taxpayers in fiscally responsible states should have the liability for fiscally irresponsible ones foisted upon them.  I think Senator McConnell is entirely correct when he said that states who've spent themselves into bankruptcy should be allowed to declare it, and take the consequences themselves.  Why should we pay for their profligacy?

To assert that police defunding is, or will be, the result of Senator McConnell's obstinacy in refusing to bail out states and cities, is breathtaking in its arrogance and denial of reality.  Those entities don't have enough money because they've wasted everything they had!  If we gave them money to bail out their debts, they'd merely incur more debt right away, to continue to live beyond their means.  They wouldn't recognize the concept of fiscal responsibility if it jumped up and bit them in the unmentionables.

The only sane approach is to spend no more than you have or can afford to pay off - not to borrow yourself into oblivion to fund such spending.  If cities and states need more money, let them cut spending, even at the expense of their much-vaunted "progressive" programs and activities.  To use an old idiom, let them "cut their coat according to their cloth" - and that includes paying down the debt they've already incurred.  Only when they're doing that, and have done so for some time, and are demonstrably on the way to genuine fiscal reform and recovery, should we consider helping them.  If they want to continue their financially self-destructive ways, let them do it on their own, without wasting our money into the bargain.

Distrust any attempt by the mainstream media to blame anything on anybody.  As Glenn Reynolds, a.k.a. the Instapundit, has said so often, "Just think of the media as Democratic Party operatives with bylines, and it all makes sense".  He frequently quotes the tweets shown below. 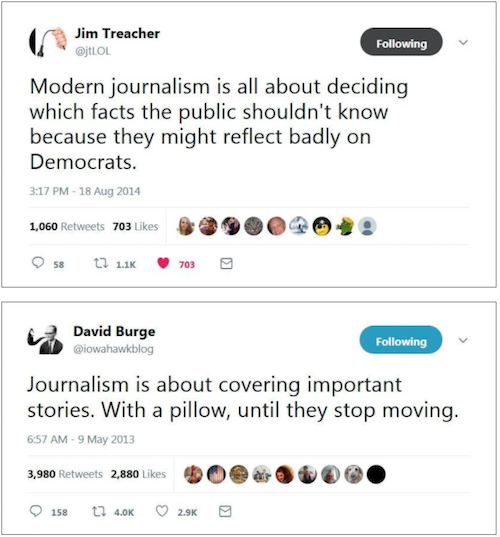 Keep that in mind, and a lot of things will become clearer.

Woo hoo! Your June 8 piece on shipping problems was picked up by the Blogfather himself, Glenn Reynolds, at Instapundit.com this morning! Congratulations on the Instalaunch!