This photograph on Gab brought back many memories.  It shows blue jacaranda trees in Pretoria, South Africa.  They flower in October and November, which is spring in that part of the world. 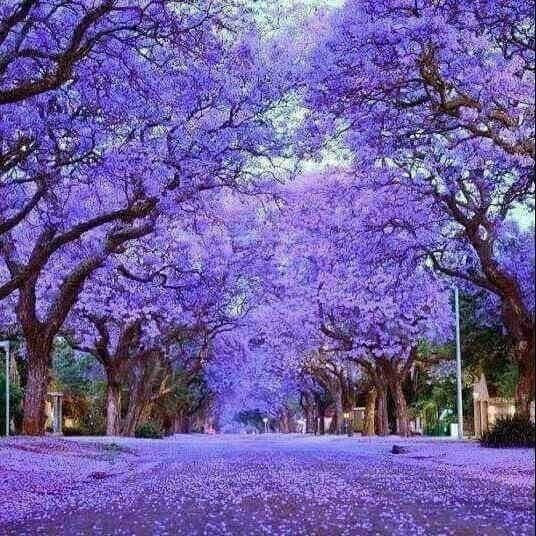 The jacarandas were imported to South Africa from South America at around the turn of the twentieth century.  Today they're regarded as an invasive species, but their beauty has become a fixture of Pretoria and other cities in the area.  When I attended a seminary in that city, I used to walk along streets that were a riot of blue and purple flowers, with the blooms falling from the branches and squishing underfoot.  They became quite slippery when it rained, as I learned to my cost on more than one occasion.  (Their sap also eats car paint if you don't wash it off regularly, as many motorists have discovered to their cost.)

Here's a lovely video showing many of the streets there, clad in their spring colors.

And here's another taken from the air, showing how the jacarandas are scattered around Pretoria.

Very beautiful, thanks for that!

I've seen lots of photos of them in Rhodesia. Beautiful.

There's a bit of Balboa Park in San Diego,b that is absolutely covered in Jacaranda trees.

At just the right time of year when the grass is covered in blossoms and the trees, and the sky us a deep pure robin's egg blue, you can walk up and down the hills in a magical blue world.