As I write these words, in the small hours of Wednesday morning, the results of the 2020 Presidential election are as yet unknown.  Joe Biden is in a slender lead in terms of electoral college votes, but President Trump isn't far behind, and is leading in most of the states where results are still outstanding.  However, his lead there isn't insurmountable, and the potential for the "margin of cheat" in some states (yes, I'm looking at you, Pennsylvania) is very great.  We probably won't know a definitive result until late next week, if neither side concedes - and I doubt that they will.  This is not good for the country as a whole.

If current trends continue, and if current results are confirmed by the outstanding ballots still to be counted, then my forecast last Monday may have been prescient.  I said then that "President Trump probably has enough support ... to win the Electoral College, perhaps with plus-or-minus 290 votes."  As of right now, as I write these words, if he wins all the still-undecided states where he leads at present, this will be the result: 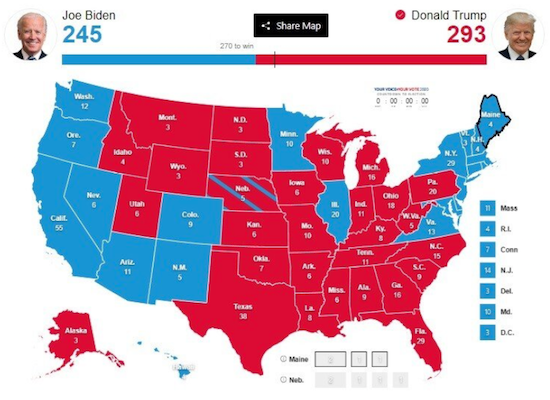 There is, of course, no guarantee that he'll hold all those states.  Only time and the remaining ballots will tell.  He can afford to lose Pennsylvania and still scrape the narrowest of victories, or lose a similar number of electoral college votes in other as-yet-undecided states, but it'll be a very close-run thing.  Meanwhile, I wish he'd shut up and stop blustering!  Nobody knows the result yet.  He's not helping by bragging and/or whining about it.

The Senate looks as if it will remain under Republican control, perhaps with one seat less than before, but the House of Representatives looks like it'll remain in Democratic hands.  Legislative gridlock is likely to continue.  That's both good for the country, in that one party's unfettered wish list will be very hard to implement, and also bad, in that a coherent policy program is going to be almost impossible to get through Congress.  We'll continue to see presidential executive orders being used to overcome such problems, which will lead to further legal challenges.

Folks, it's a very uncertain time for all of us.  Let's not lose too much sleep over it.  Sooner or later, we'll know for sure who's won and who's lost.  Until then, let's do our best to keep the peace, and exercise our democratic right to be watchful as the votes are counted.  There's still plenty of opportunity for the extreme Left's much-vaunted "Operation Red Mirage" to inject fraud into the results, and I believe there are people and groups out there who'll try to do just that.  We must be on our guard against them, and hope that our courts are too.

Even if Trump does win, does anyone think he will do anything great cleansing against the swamp, the elite, the tech elite or the media without a large win?

Are we just kicking the can down the road another 2 to 4 years?

What's the game plan Willis? Hang on in the countryside? Blog postings via smoke signals? Line up for the train cars?

What we learned from this election:
There is no law, only Zuul.

The joke here is if you want the early results, just look toward downtown Denver and look for the rising cloud of smoke. A big black cloud signifies a Trump win.

Not in this state, with all-mail-in voting and legal unrestricted ballot harvesting.

Per above, Wisconsin went Biden, but there are questions, just like in Michigan and Pennsylvania. Enough to flip back to Trump? We'll see.