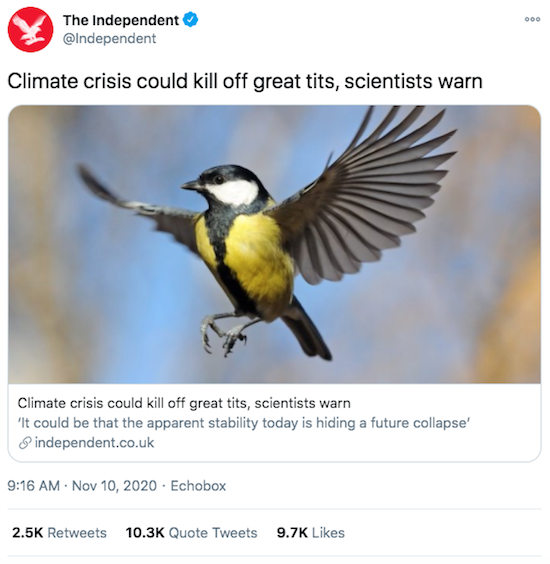 Yes, there really is a bird called the great tit.  The tweet is referring to this article.

A rapidly warming climate will spell disaster for swathes of life on earth, including many bird species.

A new study reveals some birds which are dependent on specific abundant food sources at certain times of year may not be able to adapt fast enough to the change to seasonal patterns the climate crisis is bringing.

The research, by scientists at the Norwegian University of Science and Technology and Oxford University, focused on great tits’ dietary habits.

Real bird or not, I've no doubt there's much snickering going on over that headline.  I wonder which sub-editor thought it up?

Have a very happy Veteran's Day, Peter!
The same to all you other survivors out there.

Getting shot is is highly overrated. One star. Do not recommend.

I have a great appreciation for both tits and boobies and support all efforts to preserve and uplift them and keep them visible.

More of a leg man my self. Save the Flamingo's

There used to be a website called nice-tits.org - it was the site of the Royal Birdwatching Society. Long gone, unfortunately.

Funny, I remember when the coming Ice Age in the late '70s was going to kill off the Tits and other song birds.

I'm surprised that SUVs aren't being caught on camera eating little birdies whole. Now that's a picture I'd like to see!

We also have Blue tits...

You have posted 2 pictures so we would have both tits.