One despairs of their train of thought sometimes...

One of the most upsetting things about our current political brouhaha is the blind, dogmatic certainty displayed by extremists on both sides (but mostly on the left, in my recent experience).  They appear willing to accept, or associate themselves with, pure evil, just as long as that evil is willing to support their side.

That's a non-starter, of course.  Evil means can never produce a good end.  Evil methods never produce a worthwhile outcome - at least, not one that's worthwhile in terms of normally accepted moral and ethical standards.  Yet, there appear to be those who are blind to that reality.

This example jumped out at me this weekend.  Having worked with the survivors of child abuse, my mind absolutely boggled that anyone could say anything so unbelievably stupid, crass and morally blind - not to mention downright evil. 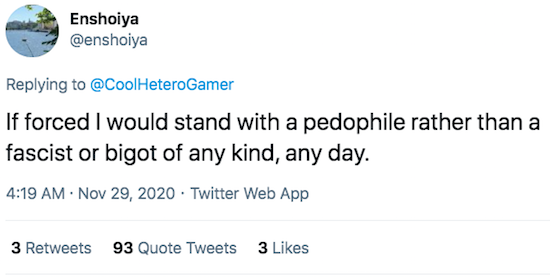 Some of the replies were scathing;  others actually expressed at least some support for that attitude, which I utterly fail to understand.  One accurately paraphrased the original as, "I’d rather stand with people who groom and rape kids than people who simply disagree with me."  Yes, that's exactly what the original tweet implied.  Why is it so hard to understand that, and see how false it is?

I guess it's up to us, dear readers, to be the "leaven in the lump":  to demonstrate, by our own lives and conduct, that there are, indeed, moral and ethical standards and norms, and that we depart from them at our peril.

As for those who choose to "stand with a pedophile" . . . on their own head be the consequences of their choices and actions.  What should those consequences be?  Ask anyone who was abused as a child.  Some of them can be quite inventive about it.

At this point, civil war is not evil, nor is it desirable. It is merely necessary. "All that is necessary for the triumph of evil, is for good men to do nothing."

These people know their position is ethically wrong, but from their perspective it's just a compromise they feel acceptable since ethical standards are relative anyway.
The problem is that ethical standards reflect the norms a society deems appropriate and acceptable and through their position they make a clear statement: in their concept of proper society pedophilia is just some kind of minor misdemeanor, which they also deem acceptable sacrifice in order to eliminate the "fascists" and "bigots".
Considering also their implied definition for fascist and bigot - at least from the tweet - they would rather stand with a pedophile than with anyone having a different opinion regarding the mandatory wearing of masks.
In summary what they say is "I'd rather sacrifice children than accept a different opinion" - but I don't think they'd rathe4r sacrifice something of their own: their own freedom, health, wealth, etc.
The sign of the time: a supremely selfish generation with the spine of an earthworm and an ego the size of Jupiter.

That's what the left wants. Fascism... but without the fancy uniforms...

I do not think this is what the twit thinks.

As to pedophelia, it's the gift that keeps on giving. I know one lady, almost 65, who still suffers nightly from nightmares from being abused.

To me, the only good pedo is a dead pedo.

Look at it this way:

Pedophilia destroys at most an extended family at a time.

Lefty/Progressive/Liberal politics can destroy thousands of families - an entire nation - at a crack.

If you're both a pedophile and a communist*, how miniscule can the crime of ruining a single family appear to you?

There are an awful lot of mentally ill, as well as ill-informed people walking along the streets/staying ensconced in their homes today. They could be your next-door neighbor, they could be family you don't visit too often. We used to recommend treatment or lock them away in homes, but today the weird and the odd and the extremist stance have gained the upper hand.
And it's our fault because we kept saying to ourselves, "We can't really lock them away because they're a bit unusual."
Well! We've seen - finally; if you give an inch (without saying/doing anything) these individuals will take a foot. They'll push the envelope until they're now no longer standing in front of you haranguing you with their idiocy; they're now at your undefended back - with their friends.
Our fault! we realized the problem and did nothing about it - not out of fear - out of kindness and "good upbringing" and now we're going to pay a price for our (and I include myself) foolishness.

There's a reason that chesters don't live long in prison, except in solitary.
As for the ethical issues, I thought long and hard way back when Saddam Hussein and his grotesquely evil spawn were in the headlines day after day. I concluded that there was little to nothing that I could do about that, but that I could see to it that my life and interactions were the best that I could be. Let's not lose sight of your words Peter: "I guess it's up to us, dear readers, to be the "leaven in the lump": to demonstrate, by our own lives and conduct, that there are, indeed, moral and ethical standards and norms, and that we depart from them at our peril." Very well said.


OTOH, if you "stand by a pedophile" you are necessarily well placed to stand ON a pedophile at some point.