More about ammonia as an engine fuel

A few weeks ago, I wrote an article titled "Ammonia as an engine fuel?"  It mentioned plans by a South Korean shipyard to build a major container vessel powered by ammonia, as opposed to fuel oil, diesel or natural gas, and speculated on the future use of ammonia in other engines.

A recent article at the BBC examines ammonia's potential for more widespread use, particularly due to environmental factors.

The International Maritime Organization (IMO) wants to halve emissions by 2050, from 2008 levels. That requires a substantial shift to green technology.

Brian Soerensen, a research and development chief at Man Energy Solutions, says several fuels are being explored: "One of the options we believe will be ammonia. Methanol could be another one, biofuel could be a third."

Ammonia has an advantage as it contains no carbon, so can burn in an engine without emitting carbon dioxide. 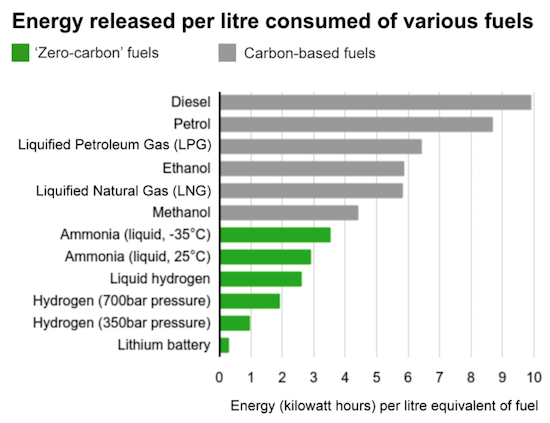 While it is less energy-rich than today's marine fuels, liquid ammonia is more energy-dense than hydrogen, another zero-emission fuel ... "Ammonia sits very nicely in the middle," says Dr Tristan Smith, an expert in low carbon shipping from University College London. "It's not too expensive to store and not too expensive to produce."

There's more at the link.  It makes interesting reading from a mechanical and technical perspective.

Thinking about it, that makes a lot of sense.  If emissions control is a priority, it makes sense to use the "greenest" fuel available;  and ammonia, while not nearly as efficient as fossil fuels, is nevertheless more energy efficient (and therefore more economical in practice) that other "green" fuels.

Like almost everything else in engineering, it's a trade-off.  You'll use more ammonia than bunker fuel or diesel or natural gas, thus costing more money;  but you'll give off less carbon-based pollution, which is costly from an environmental standpoint (and possibly in carbon taxes as well).  You pays your money and you takes your choice.

However, I'm not sure how well this will translate to smaller engines, particularly in close proximity to people.  Ammonia fumes are toxic.  The less we have of them around us every day, the better!  Out at sea, that's not necessarily much of a problem, particularly given ship-scale scrubber technology to filter them.  In a big city . . . not so much.

. . . ammonia production is a very energy-intensive process, consuming 1 to 2% of global energy, 3% of global carbon emissions,[123] and 3 to 5% of natural gas consumption. - Wikipedia

...not to mention NOx production from ammonia combustion, but there it is. Nitrogen oxides are nasty too.

So we're going to burn more hydrocarbons to make something just as nasty, and with only 1/3rd the power output per pound/kilo/whatever, thus tripling fuel requirements and cuttingpower/speed by 2/3rds?!?

This is asininity only the Greentards could embrace.

If the Greentards volunteer to be the beta-testers on those projects, exclusively, I'll support them.

Otherwise, other than lab novelty projects guaranteed to be a complete and utter waste of time, money, and effort, anyone seriously proposing those alternatives should be staked out on the ground, covered with honey, and offered as a sacrifice to the Fire Ant God, and the ordeal televised, for crimes against humanity.

We institutionalize insaniacs; we do not cater to their delusions.

The insane are medicated, then turned loose as homeless street crappers.

I'm admittedly biased, (re, my screen name) but why isn't nuclear power included in tat list? Zero carbon emissions, zero NOx, and nearly zero radioactivity releases. Nuclear ship propulsion is a proven technology and is especially well adapted to large ships. Oh yeah MAN makes large marine Diesel engines not portable nuclear plants. I'm not saying there aren't issues with capital cost, crew training and technical details that need to be resolved (although NuScale has a small modular design that could be adapted to shipborne service fairly easily). However, if you are serious about reducing emissions for shipping, nuclear power should at least be considered.

LOL..... the quantity needed to meet our society's energy needs is completely unattainable.

Reminds me of a lengthy article in the 03 2019 National Geographic about a project called Breakthrough Starshot that would use laser transmitters to propel a spacecraft to the nearest star. They casually mentioned it would take close to a billion laser beams to do the job. A BILLION. The mind boggles at this sort of stupidity. A billion beams, mounted on who knows how many steerable mechanical structures, powered by God knows many power supplies and computers at tens of thousands of sites, using a vast amount of Earth's available electrical energy and consuming the efforts of mankind and our resources for who knows how many years to build and install a billion lasers with all the necessary support equipment and structures. Just the maintenance would be mindboggling in scope and cost. And all to send one little vessel off to Alpha Centauri which we would not hear from or get results from for hundreds of years. Verily, the mind doth boggle.

And we taxpayers pay for this sort of inane research.

I quit reading National Geographic after that. Particularly since it's obvious their editors don't understand or give a thought to what they are publishing. (Not their job to detect and edit out obvious lunacy, I suppose)

I do note that the magazine is quite a bit thinner than before. And it's become a feminist mouthpiece. IMO, they are now totally converged and are busily digging their own grave. Sad to see.

Bob: Breakthrough Starshot sounds... somehow... familiar?
Oh, right. Niven, Pournelle, and Crazy Eddie did that one long before 2019. At least Crazy Eddie had Watchmakers and an asteroid-belt civilization going for him.
Yeah, NatGeo, like just about all the legacy publications, has gone (or been led) far astray.

Nope. You can clean up safely and not so bad environmentally, from a petroleum-based fuel source - deisel or petrol. Messy but it ain't gonna kill you and yours.

An ammonia spill? Hahahahahaha. Subtle hint. Did you know that water treatment plants have a dead zone around them? Because that's the zone of death if a chlorine release happens.

Now... Do ammonia. That stuff is extremely toxic if released, and it displaces air very well. There's a major reason only industrial applications use ammonia as a coolant.

Nope. Nuhuh. You stand a better chance of surviving a catastopic release of LPG or LNG.

And, geez, you have to keep Ammonia very cold and very pressurized in order to get any real energy potential out of it. Which costs... more energy.

Petroleum products are still the best.

Did any of these numb nuts ever take physics or chemistry?

Four little hydrogen bonds just like methane has. Mot much energy there compared to gasoline, kerosene or diesel.

If you're serious about carbon emissions you use nuclear power. Did you know that a submarine's nuclear reactor weighs less than the fuel load of an A380?

Oh, and nuclear engines are good for space travel too.

Even if you buy into the global warming theory, this makes zero sense. According to the EPA, N2O is 300x more potent as a greenhouse gas than CO2. How would trading CO2 for N2O be a benefit?

And what do we use to neutralise the toxic ammonia gas when it has escaped? Carbon-dioxide.

Hydrogen combustion also produces a greenhouse gas, indeed the most common one - H2O vapor. Also, the energy to produce the hydrogen has to come from somewhere . . .

Why in the world is everyone so terrified of carbon dioxide?

Or "carbon" for that matter: All life on earth is carbon-based, and if plants don't get enough C02 we all suffocate.

Petroleum byproducts, heavy metals: sure, worry about these! But carbon-bloody-dioxide? I have to be missing something. This is just too moronic.

Bunker fuel, which is what most big ocean cargo ships burn, has to be heated to make it liquid enough to burn in a diesel engine. It's not quite asphalt, and it's so filthy it makes diesel look like hydrogen. Reducing its use is a good thing. But replacing filthy with toxic isn't a solution.

Nobody is mentioning wind power. While sails and wind turbines won't supplant IC, it can reduce the amount of fuel burned in many cases.

Also, there is sky sails.


If we ever could get Methane into some kind of non-gaseous form inexpensively.