The Sikorsky-Boeing SB-1 Defiant helicopter, a competitor for the US Army's Future Vertical Lift program, is getting closer to first flight next year.  The joint venture has just released pictures of the first prototype on the runway in Florida.  Click either image for a larger view. 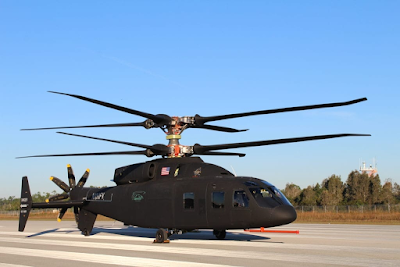 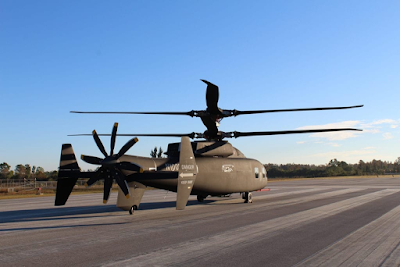 It's hard to judge scale without a reference point, or accurate dimensions provided by the manufacturer, but my first reaction is that it's bigger than I thought it would be.  It's supposed to be a Blackhawk-class replacement, but it's clearly taller than its predecessor, and possibly broader as well, although that may be an optical illusion caused by the wide tailplane.  Of course, it's still significantly narrower than its rival in the FVL competition, Bell's V-280 Valor, which we've visited in these pages before.  The Valor's wing, with rotors at its tips, is probably at least 50% wider than the Defiant's rotor configuration, and perhaps more.

I've mentioned in a previous article that I find the Valor's width excessive from a tactical perspective, no matter how effective it may be from a technological or flight perspective.  I don't know whether the same applies to the SB-1's greater height.  I can see it having disadvantages in flying nap-of-the-earth, as in the example I cited in the earlier article, but I'm not sure that would be as big a disadvantage as the restrictions imposed by a fixed wing.  I suppose only careful testing will find an answer.  However, I do find it interesting that Russia's attempt to come up with a FVL program of its own has focused on the same coaxial rotor concept used by the Defiant.  It may be that's an easier technology to develop and maintain than a tilt-wing aircraft.  I'd also like to see how the coaxial and wing designs compare on the deck of an amphibious landing vessel.  I suspect one might be able to fit more of the former onto the deck than the latter.

It's also interesting to note the joint proposal from AVX Aircraft Company and L3 (shown below) for the US Army's Future Attack Reconnaissance Aircraft (FARA) program, announced earlier this year. 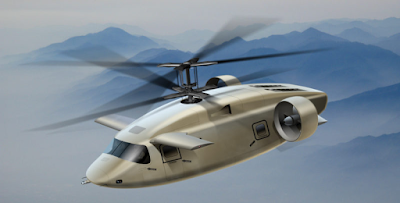 It also uses coaxial rotor technology, like the Defiant or its smaller sibling, the S-97 Raider (shown below), which will be Sikorsky's submission for the FARA competition. 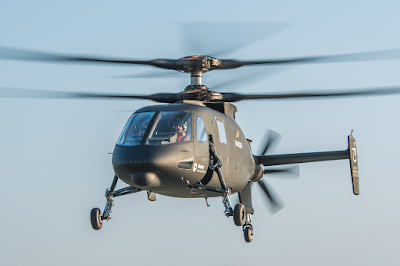 So far, more manufacturers (in multiple countries) appear to be focusing on coaxial rotor technology than on tilt-wing.  I think the cost, complexity and sheer size of tilt-wing tactical helicopters are going to make that design more vulnerable, from both tactical and budgetary perspectives . . . but that's just me, basing my views on what may be an outdated and/or technologically backward point of view.  (For an interesting comparison of the two approaches, including technological and tactical considerations, see here.)

As before, let's hear from readers who have up-close-and-personal experience with tactical helicopter operations.  What do you think?

Why? Cost will be astronomical, parts produced in every congressional district and maint done by the average kid from AL, MS or GA. I'll pass. Look at the RAH-66. Very nice toy but against whom? A pusher prop borrowed from the AH-56 Cheyenne program. The Army must think like Marines...use an older platform and upgrade. This is a gold plated toilet seat.
I've flown attack, cav and medevac back in my uniform days. Need something with a good OR rate, not just a static display due to lack of parts or support.

The program that has jobs in more congressional districts often wins, not the best technically.

An interesting design that keeps cropping up. The counter rotating main blades deal with the torque issue. I think the pusher prop is to allow for higher forward speed. Normally a helicopter tilts the blade down to get forward velocity but only part of the power (think vectors) goes to forward motion. Also as you spin the main blade faster the tips approach (and try to exceed) the speed of sound. This gets all sorts of turbulence on the main blades at the trans sonic points causing drag and nasty vibrations (as well as noise that is less than stealthy). With the pusher providing forward thrust the main blades provide lift and some pitch/ roll control. Maybe yaw is done by letting one of the counter rotating blades slow letting torque back into the equation? I bet at full forward flight speed the main propellers are autorotating providing only lift and its a very fast autogyro in that state. It'll be a higher forward speed before the main blades go supersonic.Although technically more complex than an plain old helicopter still far less complex than a V22 or its smaller cousins. And flight controls (collective, throttle, "rudder" pedals remain the same so less retraining than for Osprey like vehicles.

In my youth I used to get to see early Sikorsky prototypes. The Sikorsky plant was about 40 miles west of us in the Orange/Bridgeport area. Near me was a little grass /dirt strip runway. They would fly hardware out to the little strip as the grass part was very sandy/dusty and I believe it let them test dust filters on early versions of the Sky Crane and Cobra helicopters. That all went away in the mid 70's when the strip got paved. Now that little airport is no longer there, there's elderly/low income housing, the airport was killed by the drop in general Aviation usage after 9/11 and the fact that is 2500' runway and attendant lands with views of Long Island Sound were worth far more than its meager income as a GA airport.

The Soviet naval hell’s have been using counter-rotating props for over 40 years. The Hormone A and B are old friends.

A massive increase in complexity for a probably marginal improvement in speed?
And with a larger footprint in every aspect, including as a target?

Sh'yeah, you're looking at an air cav horse designed by a committee:
change the type name from Defiant to Camel.

As an aircraft, it appears to be an answer in search of a question.

This is what happens when engineers do acid hits on the clock, and develop prototypes based on taking all the parts from 5 different helo models and making a Franken-copter. I don't know what happened to the guys who thought up New Coke™, but I'm pretty certain most of them are now in marketing at Sikorsky-Boeing.

Just a personal hunch, but 50-50 odds this idea was found amidst the unpublished private papers of happily dead SecDef Robert McNamara, after honchoing the Edsel and the TFX.

Shorter main blades are almost always better for real-world use. The two main problems for long blades is tail strike due to flex and supersonic airflow on the forward sweep at high aircraft speeds.

I'm a little surprised that no one appears to be attempting a 3 or 4 rotor system. Taller would be an acceptable trade-off for narrow and fast.

@aesop, twin-engine, twin-rotor designs are hardly a massive increase in complexity, not even in the coaxial configuration as compared to the flying banana series. They eliminate the need for a tail rotor, but open up the possibility of a pusher propeller for speeds not capable of by a conventional helicopter. 250 kn cruise speed versus the 150 kn cruise speed of a Blackhawk is nothing to sneeze at! If the promised new engines come on line alright, it'll have 60% more range than a Blackhawk. And will be a much better air assault platform than the crazy complex and delicate Ospreys. At high speed, I expect little power would be going to the main rotors, they would be auto-rotating and so the tips won't be pushing supersonic velocity. This is the smartest helicopter development to come down the pike in decades, ever since the CV-22 Osprey began to eat the budget while being delayed year after year after year.

I notice that the three tails are close to the ground. Does the counter rotating blades (or the pusher blade?) eliminate the helicopter needing to lean backwards to slow down in a hurry? Do helicopters even Flare like airplanes do?

These are all interesting entries into the fray. Each has their own pluses and minuses. Each of the companies are building on what they think is the best way to get the job done. Some of them are looking way into the future at not just the next generation but what is to replace that. I have worked specifically on the super sonic shock wave generated by advancing helicopter blades reducing angle of attack while at high airspeed and destroyed some instrumentation when the shock wave was more than we expected. (That was funded with public money so we can talk about it) There are other tests happening that are proprietary to the company that is sponsoring them so that is not public data.

While all this is well and good, the competitions come down to politics as much as technical merit unfortunately. The decision by the powers that be to scrap the entire Kiowa line from training to light armed attack helicopter was stupid on so many levels and has cost the taxpayers as a result. Having to establish a completely new supply line for not only parts but trained personnel to maintain as well as fly is only a fraction of the stupidity.

The big parameters for the tilt-rotor concept are speed and, most importantly, RANGE. Helicopter are fuel-intensive machines with top speed limited by the absolute need to keeping the rotor tips subsonic, but they can land vertically in a small space Currently this calls for two different machines: the UH-60 and the MV-22. The use of composites for airframes and elimination of the copilot by electronics will improve the performance of both systems but I doubt that ones machine will do it all.

A minivan is not a 45-passenger bus.