Last of her legendary breed

An icon of the skies has reached the end of its production run. 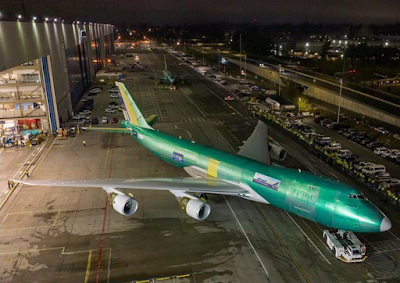 The final Boeing 747 has left the airframer’s Everett facility, marking the end of an era for an aircraft programme that Boeing says has “truly changed the world”.

The Boeing 747 programme began production in 1967, with the first example making its debut in 1969. To date, Boeing has built more than 1,500 examples.

The jumbo’s fate was sealed in the early days of the coronavirus pandemic, as travel demand collapsed and airlines grounding their passenger aircraft. Airlines such as Qantas, Thai Airways International, KLM and British Airways quickly ditched their 747-400s as the pandemic wore on.

Still, the type enjoys success as a freighter, where cargo operators like Atlas Air still operate them in large numbers. Even then, some cargo carriers are moving to replace their ageing 747 fleets with a newer generation of twin-engined freighters.

I wouldn't mind having a dollar for every mile I've flown aboard a 747.  I'd be a rich man...  More than any other aircraft, the 747 "democratized" air travel.  It made it possible to reduce air fares to such an extent (through economy of scale) that the ordinary man and woman in the street could afford to fly to places they'd never previously have been able to afford to visit.  Of course, that's also led to efforts to cram more and more people into the fuselage.  That's given us the modern sardines-in-a-can experience of most flights, but at least one can still afford to fly - for now, anyway.

Not a bad legacy for what was supposed to be a stop-gap until Boeing got their supersonic passenger jet going.

This picture brought back a lot of memories. I worked for a company that supplied parts for Boeing. Several times a month we would drive all the way to the Everett site and drop off critical (safety related) units during second shift. The nicest people you'd ever meet worked on that line. All of them very experienced, veterans so to speak, of working on that plane for decades. They knew everything there was to know about it's hands on production. Sure made my job easier.

I was in logistics during the early pre-Desert xxx days, load planning and assisting in loading our equipment and that of other services that came to us for deployment. At first, all low key, and later VERY much large scale. The CRAF was engaged and I found myself on a steep learning curve planning loads for non-military aircraft. The 747 was a thunderbolt of free space. Treadways were very different from our C-141 and C-5A birds, but once used to that we were amazing ourselves with what we could ship, though we still preferred the C-5A. First time I ever heard of Connie Kalitta off the drag strip, too. :-)

We Wuz Kangs in America....

Even a Kang could get stuck in traffic if he happened to be in the wrong place around shift change times at Everett or Renton.

From back when Boeing was a premier engineering company...
Sigh.

Boeing must be chuckling with the final 747 being completed after the last A380 i.e. its 'replacement'.

I hope the airline crew coming to pick her up when completed arrive in a DC-3.

The most bizarre thing is they've been taking out all the tooling behind it as it goes. I'm used to changes, but this is the biggest. Structures that have basically been there since the building was built being torn down. If not for the 777-X, the whole factory will be emptied out in a decade as the 787 rework is completed (All production has moved to South Carolina) the 767 dies when the fuel efficiency standards being imposed kick in, and the 747 is now gone. With the CEO announcing no new programs for another 10 years, it's clearly part of the strategy to leave the union with nothing to bargain for in 2024.

GUS: The reason the 747 outlasted it's European replacement is that the Euros designed a pure passenger plane and Boeing designed a passenger or cargo plane. The 747 and A380 were and still are rather large for most passenger routes. They strain the passenger terminal facilities, take longer to unload and reload, and to keep them filled the flights often have to be inconveniently infrequent. But it turns out that there's no such thing as too much freight capacity; the only limit there is that the aircraft has to fit the runways and taxiways in terms of wingspan and weight. Anywhere with a lot of air cargo to handle has long since been rebuilt to accommodate the 747. I expect the 747 freighters to stay in service as long as the B-52 has, and the owners of the passenger planes to eventually look at conversion to freighters.

But for new production, twin engines make more sense, especially for cargo. When anyone wants more airplanes that big, they can design two huge engines with as much or more power as the 747's four. These twin engines will be more efficient and cost less for maintenance. But for now, the industry mostly needs somewhat smaller airplanes, and many engines sized to equip them as twins are already designed, FAA-approved, and in production.

There was once another reason for four engines for airliners - the FAA and other regulators were leery of aircraft losing an engine out in the middle of an ocean, and not being able to fly to land. A 747 could fly on 3 engines for as long as its fuel held out, but how far could a twin fly on 1 engine? So after WWII, twin-engined airliners flying over water were restricted to 60 minutes flight (at their speed on one engine) from an emergency landing field. As jet engines replaced piston engines and became more reliable, this distance was gradually extended (look up "ETOPS"), but 4 engine planes were unlimited, and then unlimited operations were extended to 3 engine aircraft - so there was a generation of these. This is now largely irrelevant; a new twin jet design will usually be cleared for 2 hours from an emergency landing when the FAA approves the design, then extended to 3 hours after a few years of generally safe operation. That's enough to reach anywhere that's populated in the world, with only a few cases where the route must be changed (lengthened) to stay within reach of some island in case of an emergency. So why build any jets but twins?

In fact, as far as I can find out, it's been decades since any civilian jet went down because of multiple unrelated engine failures in one flight. When they do go down due to engines stopping, it's because one thing stopped all the engines at once - like an error in fueling or a flock of geese flying into the engines. (I'd like to think only of the cases where excellent piloting saved the passengers and crew, like the Gimli Glider or Capt Sullivan's deadstick river landing, but in reality these were exceptional.) Neither more nor fewer engines would have changed these events.