Yet again, propaganda and lies are flooding news and social media

It's been informative - and highly amusing - to watch the concerted, organized, carefully coordinated attacks from left-aligned journalists and public figures against Elon Musk, for his (entirely factual and demonstrable) revelation of the old Twitter's willing self-enslavement to the Biden administration's propaganda.  The Daily Mail reports:

Taibbi, a podcaster and former Rolling Stone correspondent, came under heavy criticism from top journalists at NBC News, MSNBC, the Daily Beast, and elsewhere, who accused him of doing 'PR work' and committing journalistic malfeasance.

'Should be a cautionary tale for everyone. Selling your soul for the richest white nationalist on Earth. Well, he'll eat well for the rest of his life I guess. But is it worth it?,' he added.

NBC News Senior Reporter Ben Collins wrote: 'Imagine throwing it all away to do PR work for the richest person in the world. Humiliating s**t.'

Mehdi Hasan, the MSNBC host, had a similar criticism, tweeting: 'Imagine volunteering to do online PR work for the world's richest man on a Friday night, in service of nakedly and cynically right-wing narratives, and then pretending you're speaking truth to power.'

However, that article doesn't adequately illustrate how widespread is the campaign against Mr. Musk.  Consider this image (clickit to biggit), circulating on social media at present. 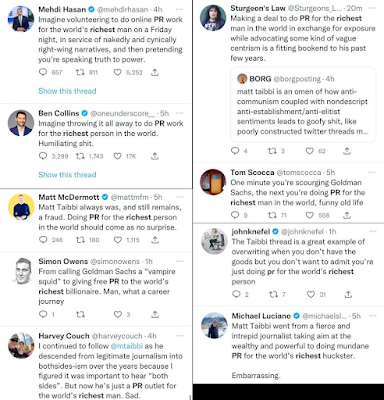 That's an awful lot of duplicated words and phrases, isn't it?  If you wanted a clearer pattern of orchestrated propaganda, I don't think you'll find one.  (That also, of course, utterly discredits every single person who parroted that propaganda.  Once they're exposed as mere puppets of the machine, why believe them about anything, ever again?)

Voltaire is incorrectly credited with the saying, "To learn who rules over you, simply find out who you are not allowed to criticize".  Despite that historical inaccuracy, the saying is nevertheless meaningful.  In a truly free society, one can criticize anything and anyone - provided, of course, that one accepts the consequences of free speech, and is willing to be called to account in the courts for any lies or misrepresentations.  In a not-free society, such expressions are censored, if possible before they're uttered.  If not, then their distribution is restricted as much as possible;  and if that doesn't work, open vilification of the originator and those who disseminate his words is the next step.  The final stage is arrest and punishment for daring to say anything that's not officially approved.

I wonder how many of those parroting the "PR outlet for the world's richest man" talking point would be willing to take the next step, and condone (if not actively participate in) the physical silencing of those they criticize?  Sadly, I fear many of them would.  They've "drunk the leftist Kool-Aid", and it's poisoned them.  They've lost sight of the fact that silencing some speech necessarily implies that all speech can, and probably will, be silenced as and when deemed appropriate by those who control it.

Victor Davis Hanson has some trenchant thoughts on modern news media and journalism in general.  He begins:

The current “media”—loosely defined as the old major newspapers like the New York Times and Washington Post, the network news channels, MSNBC and CNN, PBS and NPR, the online news aggregators like Google, Apple, and Yahoo, and the social media giants like the old Twitter and Facebook—are corrupt.

They have adopted in their news coverage a utilitarian view that noble progressive ends justify almost any unethical means to obtain them. The media is unapologetically fused with the Democratic Party, the bicoastal liberal elite, and the progressive agenda.

The result is that the public cannot trust that the news it hears or reads is either accurate or true. The news as presented by these outlets has been carefully filtered to suppress narratives deemed inconvenient or antithetical to the political objectives of these entities, while inflating themes deemed useful.

This bias now accompanies increasing (and increasingly obvious) journalistic incompetence. Lax standards reflect weaponized journalism schools and woke ideology that short prior basic requisites of writing and ethical protocols of quoting and sourcing. In sum, a corrupt media that is ignorant, arrogant, and ideological explains why few now trust what it delivers.

Go read the whole thing.  It's a concise summary of much of the evidence against the media over the past few years.  Also, for a different perspective, see Barbara Wegner's Substack post "Fake Journalists and Presstitutes".  Highly recommended.

So telling the truth and exposing evil left-wing conspiracies is now a "[cynical] right wing narrative?"

This is why the mainstream media is no longer trusted. And no longer even read or listened to.

Rush Limbaugh used to play montages of the press all saying exactly the same thing.

Odd that all the negative commenters seem to be using Twitter. Have they no honor? Well, I guess not.

Make sure you record all their names for future action...