Saturday Snippet: Listening to the quiet

We've met the late Pentecostal preacher Jamie Buckingham in these pages before.  He wrote in a simple yet profound way, and was able to encapsulate many of the problems of modern life into short, often humorous lessons that drove home his point clearly, but without belaboring the issue.

Here's another from his collection of columns, "The Last Word". 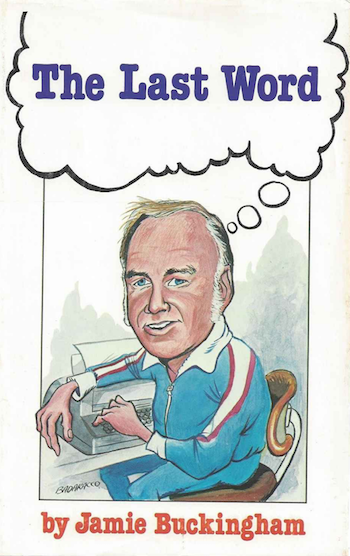 This one's titled "Listen to the Quiet".

Henry Ford once said he didn’t want executives who had to work all the time. He insisted that the man who was always in the fevered flurry of activity was not doing his best work. He added that he wanted his executives to clear off their desks, prop their feet on them, and dream some fresh dreams.

His philosophy was: only he who has the luxury of time can originate a creative thought.

An American writer, Bill Emmerson, once said: “Time is too precious to crowd.” This is an axiom. To be creative one has to deal directly with the problem, then retreat from it long enough to allow the yeasting of the mind to operate. In a quiet mood it breaks forth in splendor from its imprisonment.

Great thinkers—those who create worthwhile ideas—are men who take time. Thoreau wandered through the woods of New England, or spent time sitting on the bank of Walden Pond. But that’s the difference between spending time—and being wasted by it.

You don’t kill time, you know. It kills you, by forcing you to do things you don’t want to do.

The Apostle Paul knew nothing of the speeding luxuries of automobiles and jet planes. He took long walks down dusty paths—sometimes walking as much as a hundred miles at a time. He went sailing. When he was shipwrecked he saw it as an opportunity to create with his mind rather than as a delay in his schedule. (After all, he was on his way to his own execution.) And his times in prison, without benefit of watch or calendar, were used to bless the entire world.

Some people are adept at making on-the-spot decisions, but very few can be creative under imposed pressure. Creativity does not come by force-feeding, super-intensity, and lots of motion. Nor is it necessarily brought about by deadlines. (Editors, take note!)

I often differentiate between what the world looks upon as the successful man—the go-getter type—and the man of God who goes after nothing, but waits for God to capture him.

Creativity takes time. Occasionally I will find myself stomping around the house complaining about the lack of privacy that every writer needs to accomplish his work. My wife will reply by saying, “Well, you have twenty minutes before you leave for the airport. Why not sit down and write?” If she only knew that there are times I withdraw into my studio, close the door, and sit for hours without ever touching the keys of my typewriter—just praying, thinking, and waiting for the Holy Spirit to break through my crust with an idea.

One of life’s most sure principles is that when you stop smelling the flowers, get out of your hammock and race to a meeting, or rush to catch a departing vehicle—you do the wrong thing. In most cases the celebration of life means being late for something unimportant.

I grew up in a town that had no public clocks. The only signal of time was the blowing of the fire whistle (which was positioned on top of the town water tower) at noon. That meant it was time to go to lunch. Everyone was always late for everything—for each other’s sakes. People got up at “dawn” rather than 6:05 a.m. They went to bed “after sunset.” Ask a man when he’d be there and he’d answer “Directly,” which in the South does not mean at once; rather, it means after a while. And lunch was eaten when the fire whistle announced it was noon. Yankees called us “lazy.” But we only had one town doctor and didn’t need him very much. Nobody ever got divorced. And a lot of people had time to write, paint, and love.

When I forget what time it is, I always discover I have better moments. I still remember my first camping trip into the Sinai. We were to be gone for ten days, taking a four-wheel-drive vehicle into the heart of the desert and then hiking and climbing mountains. Our guide insisted we leave our watches at the hotel in Jerusalem. “If you want to hear God as Moses did,” she said seriously, “you have to leave your watches behind.” For three days I felt naked. Then I felt free.

The ideas that make most people famous are not original. The truth or insight really breaks upon them from the outside. (Even this concept was stimulated by a thought from Henry Ford.) The pressure of time is the greatest barrier to creativity and originality. God is constantly desiring to pour His truth into us—but if we are busy moving it is often like trying to pour milk into your child’s glass, when he has that glass in his hand and is sneezing at the same time.

Yet once the idea takes hold, it sets up chain reactions which become original until the creative person is almost seized by the entire concept. No longer does the idea belong to Henry Ford. Now it is mine. And when you finish reading this—it will be yours.

Maybe we should listen to the wisdom of quietness if we are pressed by crowded social calendars, impossible timetables, overburdened appointment books or mountains of correspondence on our desks.

Yet, to find a place to be alone on this crowded planet is almost impossible. Cocktail parties may help a person kill time (that is, if time is so meaningless that you live your life in boredom), but crowded rooms seldom spawn great flashes of inspiration. There is too much small talk, idle chatter, and wasted words. Insight and inspiration usually come in the alone hours, after cleansing our minds through prayer and refilling them with the Word of God. There, sans telephones and chattering friends, God can speak.

For a number of years I wanted a room in our house where I could go alone to pray. A room devoid of desk, kitchen cabinets, or telephone. Then we bought a large house in the country and discovered the former owner had built a “happy hour room” next to the den. We took out the bar, installed an altar, and turned it into a chapel and prayer room. Some of my greatest moments of insight into my own personal problems, or the problems faced by my friends and family, come when I enter this small, wood-paneled room, shut the doors and kneel at the little altar. I’m sure the former owner would shake his head in dismay, but I don’t think he knew how close to the truth he was when he called it a “happy hour room.”

It is reported that St. Francis said these words: “Human nature is like a pool of water, my Lord. Cast a stone therein, it goes rough and broken; stir it, it becomes foul; give it peace, let it rest, and it will reflect the face of the heavens which lie over it.”

Words of wisdom, particularly in a time so frenetic and frantic and frazzled as ours.

"Never confuse 'urgent' with 'right away'."

Can't argue with that, except for this, "Yet, to find a place to be alone on this crowded planet is almost impossible"

Most folks are afraid to leave the pavement. Step into the bushes and you are gone, baby!

I welcome the reminder. It is impossible to keep every waking moment occupied with activity and still recognize Elijah's "still small voice". We all need periods of silence and reflection. However, most today are deathly afraid of aloneness.

Sorry, I don't know how to get in touch other than an unrelated comment,but...

Are you going to finish the Laredo trilogy?

@Jim W.: Yes, I am. Look for it next year. I'd hoped to have it ready this year, but events and illness took their toll. I have several books well over half-finished, and I'm trying to complete them as quickly as I can. The past couple of years have been ... awkward.

Good words, and being alone can be done...