I was doing a bit of wikiwandering the other day when I stumbled across an article about the 1825 sailing vessel Baron of Renfrew.  I was immediately intrigued when I found it was described as a 'disposable ship'.  Wikipedia reports:

The Baron of Renfrew was a four-masted barque of 5,294 Gross Register Tonnage (GRT), built of wood in 1825 by Charles Wood in Quebec, Canada. It was one of the largest wooden ships ever built, although it was a disposable ship built for a one-way voyage to transport timber to England and did not complete a single voyage before breaking up. 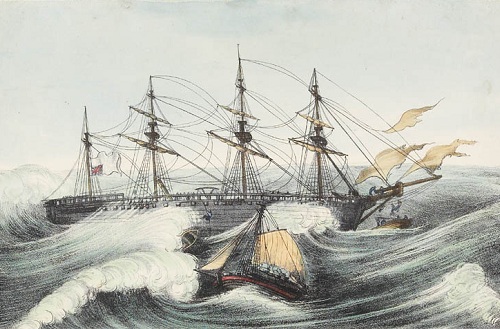 
Baron of Renfrew was built to transport timber from the New World to Europe and to be disassembled after discharging the timber cargo to sell the tax-free ship-timber, because the timber used to build the ship was exempt from the high taxes on imported timber. The barque was built by Charles Wood, Anse du Fort, Quebec, Canada, on his own account. It followed the construction of a similar disposable ship, the barque Columbus built the year before.

On August 23rd, 1825 under the command of captain Matthew Walker the ship left Quebec with a crew of 25 men and a cargo of 9000 tons timber (probably ship and cargo weight, both timber) bound for London, England. On October 21st of the same year the ship appeared in the English Channel but stranded the day after on the Goodwin Sands near Long Sound Head in the Channel already under tow of two tugs and a pilot on board. It is reported that parts of the ship and its timber cargo were found on the French coast near Dunkirk and Gravelines, according to other sources the ship, broken in three parts, were found near Calais.


There's more at the link.  The Wikipedia article on disposable ships has this to say:

A disposable ship, also called raft ship, timber ship, or timber drogher was a barely seaworthy vessel assembled from large timbers lashed or pegged together for the purpose of making just a single voyage from North America to England where the vessel was subsequently dismantled and its timbers sold piecemeal to British shipbuilders. The disposable ship avoided two problems that adversely impacted profitability of shipping in the British timber trade: high taxes and small cargoes.

The structural timbers of a disposable ship were exempt from high British taxes imposed on "oak and square pine timber" cargoes. In the 19th century, these taxes eventually reached 275% of the value of the timber cargo. Further, the return voyage from England to North America was unnecessary. Typically, return trip cargo volume was one-tenth that of the timbers brought to England. This usually required the use of ballast stones to establish the proper vessel trim and maneuverability. Ballast stones had no significant commercial value and ballast loading and unloading was costly and time-consuming.

One of the largest wooden sailing vessels ever built was a disposable ship called the Baron of Renfrew. Launched in June 1825, the 5294 ton crudely built Baron of Renfrew was wrecked as it was being towed toward London in a storm. Although reports differ, most indicate that the vessel's timbers were recovered and sold, and that the venture was ultimately successful.

When the British tax on timber cargoes was changed, the economic advantage was diminished and disposable ship construction ceased shortly afterwards.


So it seems that the Baron of Renfrew actually served her designed purpose - much of her timber did, indeed, reach England, despite her shipwreck, and was sold there.

I wonder who thought of building a 'disposable ship' to avoid taxes?  I've heard of many weird and wonderful tax avoidance and evasion schemes, but never one like that!  And what sort of sailors would agree to crew a 'disposable ship' during a period when, even in a well-found vessel, the occupation of seaman was extremely hazardous?  I'd have thought they'd have feared ending up just as 'disposable' as the ship herself - which nearly happened!

I guess the locals were really successful in lobbying against imported timber. I'm sort of amazed it took any more than a simple 100% tax rate to stave off the competition, though: who would bother importing any at that point?

IIRC, one of the reasons they had to import so much timber was that most if not all of the old growth forest in England was gone by then. Since Britain depended on shipping and ship building, they had to import good timber as raw materials. The government had the shipbuilders over a barrel, so they jacked up the taxes on what was essentially a critical necessity to the national economy. I'm just surprised there weren't more shipbuilders in Canada.