US Navy shipbuilding - bungling at its best


The US Navy just can't seem to stop shooting itself in the feet as far as fleet planning, construction and management is concerned.  Over the past few years there have been all sorts of mismanaged projects, disastrous delays, fanciful forecasts (that are never attained in reality), and so on.  A few examples:

There are many more naval programs that could be mentioned, but space precludes us doing so.  What I'd like to address in some detail tonight is the Littoral Combat Ship (LCS) program.  Last month the Project on Government Oversight released a large number of US Navy documents purporting to show extensive problems with the Lockheed Martin-led consortium's version of the LCS, USS Freedom.  POGO's press release highlighted a number of issues.

... the Lockheed Martin version can hardly even make it out of the harbor. As we wrote in our letter, POGO has obtained a number of documents showing that Lockheed Martin’s USS Freedom has been “plagued by flawed designs and failed equipment since being commissioned, has at least 17 known cracks, and has repeatedly been beset by engine-related failures.”

These are serious problems. "What the documents show is grounds for questioning this LCS variant's viability," says POGO National Security Investigator Ben Freeman. A source close to the program, who blamed the Navy’s Quality Assurance for accepting such a flawed ship, told POGO that this ship is “not fit for combat and should only be used for training [at most].” 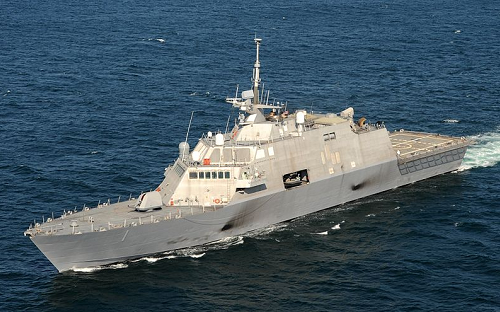 In the letter, POGO pointed out that “from the time the Navy accepted LCS from Lockheed Martin on September 18, 2008, until the ship went into dry dock in the summer of 2011—not even 1,000 days later—there were 640 chargeable equipment failures on the ship. On average then, something on the ship failed on two out of every three days.”

According to the documents POGO obtained, in one particularly dangerous example, the ship was involved in counter-drug trafficking operations—which included detaining suspected drug smugglers—when the electricity on the entire ship went out, leaving it temporarily adrift. If this had occurred during combat, this mishap could very well have been fatal.

Another problem area is the LCS's equipment and weapons.  The ships are designed to be 'modular';  the vessels themselves are lightly armed and equipped, relying on mission modules to carry out the various missions with which they may be tasked.  Specialist modules include minesweeping, surface warfare, anti-submarine warfare, etc.  Unfortunately, none of these modules are yet ready for service;  in fact, by 2016 the Navy will have multiple LCS hulls in service, but not a single module for them!  Furthermore, war games have revealed numerous shortcomings with the module concept.

The US Navy has defended itself against POGO's criticisms, but many who've been following the sorry litany of problems in its shipbuilding plans and practices no longer believe the service's protestations.  It seems that Congress feels the same;  a House committee just passed an amendment to the proposed 2013 Defense budget "requiring Navy leaders to provide a 'comprehensive briefing' on the Littoral Combat Ship.  Offered by Rep. Duncan Hunter, the amendment claims the Navy has 'not adequately informed Congress to the full extent possible on [LCS] program deficiencies, including mechanical and structural failures'."  Furthermore, Aviation Week has just published an exposé alleging many of the same problems identified by POGO (including photographic evidence), plus an analysis of cost concerns about the program.  Finally, as if to add insult to injury, the Navy has just admitted it's still trying to figure out how to build and operate its LCS fleet.  After so much has been invested in designing, building and testing the darn things, it's legitimate to ask why such studies weren't completed years ago!

To cap it all, USS Freedom has just comprehensively failed a preliminary service evaluation.  The review team's signal noted:

2. SENIOR INSPECTOR COMMENTS: USS FREEDOM (LCS 1) IS EVALUATED AS A "NO-GO" AND IS NOT RECOMMENDED TO PROCEED WITH THE SCHEDULED SPECIAL TRIAL (ST). FREEDOM'S CREW AND CONTRACTORS WERE NOT PREPARED FOR THE INSPECTION. BOTH ENTITIES WERE UNFAMILIAR WITH THE CONDUCT OF INSURV MATERIAL CHECKS. EXECUTION OF THE SOE WAS VERY POOR. THERE WAS CONFUSION BETWEEN CONTRACTOR AND CREW RESPONSIBILITIES FOR THE PERFORMANCE OF EQUIPMENT CHECKS. THE INSPECTION EXPERIENCE LEVEL FOR THE MAJORITY OF THE CREW IS LOW ALTHOUGH THEY DID DEMONSTRATE A GOOD POSITIVE ATTITUDE. THE CREW AND CONTRACTORS NEED TO CONTINUE TO FAMILIARIZE THEMSELVES WITH THE SHIP'S EQUIPMENT, OPERATIONAL PROCEDURES, IMPROVE IN PRESENTATION/DEMONSTRATIONS AND AGGRESSIVELY MANAGE/COORDINATE SOE. THE SHIP WAS CLEAN. SEVERAL AREAS REQUIRE PRESERVATION. SAFETY PROGRAMS ABOARD THE SHIP ARE NON-EXISTENT. THE SHIP DID DEMONSTRATE THE ABILITY TO SELF-ASSESS. HOWEVER, THEY ARE NOT AGGRESSIVELY REPORTING AND PURSUING RESOLUTION OF THE DEFICIENCIES THEY HAVE IDENTIFIED.

On the basis of all this evidence, it seems to me to be long past time for a major housecleaning of everyone involved in that side of the Navy.  Get rid of the incompetents, and find people who'll do better from now on!  I'd start at the very top of the Navy's Admirals, and work down from there.

(Let me also note that Lockheed Martin, which is partly responsible for the appalling mismanagement and other problems that have dogged the Joint Strike Fighter program, also leads the consortium that built USS Freedom.  Perhaps it's time to bar the company from any further defense contracts, unless and until it demonstrates that it can actually manage the ones it has, and deliver on its promises, on time and within budget?)

Interesting post, Peter. I have been involved with the navy all of my life. I was born on a navy base, and to this day, work for the navy in aviation.

Some heads should roll - I agree - but it won't start at the top. Those guys are all insulated and protected.