Lovers of Parmesan cheese had better stock up!


Lovers of real Parmesan cheese - properly named Parmigiano-Reggiano - and, to a lesser extent, Grana Padano cheese had better build up their supplies of the stuff while they can, because the real thing's likely to be scarce for the next few years.  The Telegraph reports:

Around 400,000 wheels of Parmigiano-Reggiano (Parmesan) and Grana Padano cheese, worth more than 240 million euros [over US $300 million], were damaged when [a] powerful earthquake toppled them from the warehouse racks on which they are left to mature.

At least 10 per cent of Parmesan production was affected, according to Coldiretti, a national farmers' association.

The cheese wheels, which each weigh around 88lb, tumbled to the ground after the racks on which they were stored, known as "scaloni", fell on top of each other like dominoes.

"In my warehouse there are 32,000 wheels of Parmigiano lying ruined on the floor," said Dante Caretti, 70, a cheese producer in the town of San Giovanni in Persiceto, north of Bologna. 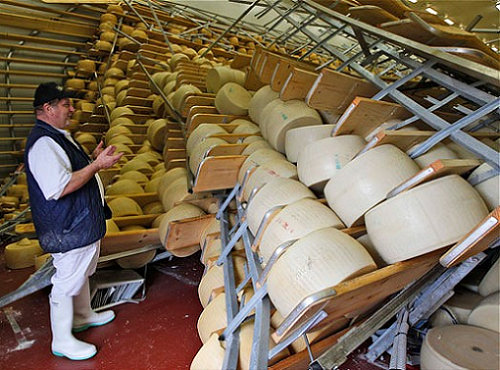 "It's a disaster – two years work just thrown away. There will be a big hole in the market – you can't just conjure up cheese which took 24 months to produce." Badly damaged cheeses will turn mouldy and are likely to be thrown away.

Less badly affected cheeses will probably be ground up and sold as pre-packaged, grated Parmesan, fetching far less than the 15 euros a kilo that mature cheeses commands.

Around a dozen Parmesan factories and ageing warehouses were damaged by the quake, which struck at 4am on Sunday, reducing historic buildings to rubble and destroying factories.

Producers of prosciutto ham were also affected by the earthquake, which hit a rich agricultural triangle between the historic cities of Bologna, Modena and Ferrara.

Of course, US consumers will still be able to get 'fake' Parmesan cheese, which is not the same as the real thing.  As Wikipedia explains:

... in the European Union, "Parmigiano-Reggiano" is a protected designation of origin (PDO); legally, the name refers exclusively to the Parmigiano-Reggiano PDO cheese manufactured in a limited area in northern Italy. Special seals identify the product as authentic, with the identification number of the dairy, the production month and year, a code identifying the individual wheel and stamps regarding the length of aging.

Outside Europe, commercially produced imitation cheeses may be legally sold under the generic name Parmesan, although there are substantial differences in terms of quality, taste and nutritional components. When sold in Europe, such cheese are obliged to use another name ...

The real thing has a taste all its own, as I can attest after eating it in Italy during a visit a few years ago.  Delicious!

That's what I was afraid of when I read the first news stories. Time to grab a few chunks for the larder before prices rise (more). I wonder if the retailers will also bump the prices of Asiago and other hard cheeses as well?