Earlier today we spoke about the 150th anniversary of the Battle of Gettysburg.  However, today's also the anniversary of the first carrier air strikes of the Korean War in 1950 - and therefore of the first operational missions of carrier-borne jet strike aircraft, too.  Intercepts has an interesting article about them, with many US Navy photographs to boot.  Here's an example. 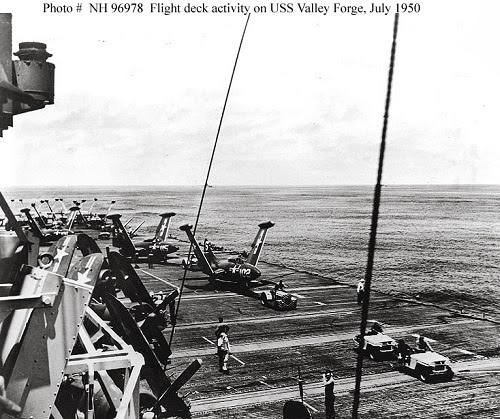 There are many more images at the link.  Interesting historical information for aviation and military buffs, particularly to see World War II-vintage F4U Corsair and A-1 Skyraider propeller-driven aircraft sharing the flight deck of USS Valley Forge with more modern F9F Panther jets.  Also of interest is that on the mission of 3rd July 1950, according to Wikipedia, "Lieutenant junior grade Leonard H. Plog of U.S. Navy's VF-51 flying an F9F-3 scored the first U.S. Navy air victory of the war by shooting down a Yak-9".

Peter Grant, (please excuse my assumed familiarity), given this subject matter, many, very many, would find a movie about Navy Panthers, Cougars, and Phantoms, (NOT the F-4-do your homework kiddies), rather interesting.
For it's time, and frankly, even now, it 'stands up well', in so many ways.
It's title, "The Bridges at Toko-Ri". (might be the 'bridges OF toko-ri).
Disregarding the Hollywood influence, the movie borders on a classification of 'historical document'.
That's my opinion, for what it's worth.