More on the Airbus and the Hawk


A couple of days ago I posted a photograph of an Airbus A380 flying in formation with a BAE Hawk advanced jet trainer, illustrating the vast difference in size between the two aircraft.

The planned formation fly-past of the A380 with no less than nine Hawks of the Royal Air Force's Red Arrows aerobatic display team took place at the Royal International Air Tattoo yesterday.  It re-emphasized the size difference between the aircraft. 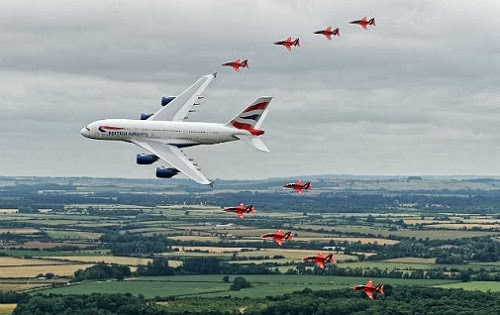 The Red Arrows apparently had to maintain formation with extreme care, because the wake turbulence generated by so huge an aircraft as the A380 can throw around even large airliners for some miles behind it (which is why wake vortex separation classifications and distances are necessary).  A relatively tiny plane like a Hawk would be tossed around like a toy, possibly causing a collision or crash, if it got into such turbulent air.

You can read more about the display here.

Believe it or not, even a hang glider can generate a wake dangerous to other gliders, as I found out one day at Ft. Funston in S.F.
I got a little to close above and behind a buddy and got seriously trashedeswalk. No harm, but a wakeup call for sure.

Horrible historical example: YB-70 vs. F-104. Not exactly what the public affairs unit had in mind.