So much for quantitative easing!


In the latest Casey Daily Dispatch newsletter, Alasdair Macleod writes about 'The Blindness of Modern Economists'.  In the process, he shows graphically why so-called 'quantitative easing' has been such a disaster, and why it's diminished the relative value of the currencies of every country that's tried it.  Here's an excerpt.

The ownership of wealth has been replaced by debt, and savings replaced by bank credit. The financial crisis of 2008 was merely the end of this unsustainable road. It represented a systemic refusal to continue down this route.

Since then, central banks have sought to blow more air into the deflating credit bubble by creating more raw money. Central bankers are acutely aware that if they did not do so, many banks would go bankrupt. By subscribing to the GDP fallacy, they justify printing money to maintain government spending. Their naïve belief in the quantity theory of money persuades them that they need to print money to make prices rise by a targeted 2% per annum, and moreover that the relationship between the quantity of money and prices can be managed.

These combined errors lead central bankers to print too much money, a grave mistake illustrated by the chart below, which shows that growth rate of the US money supply is now at hyperinflationary levels. 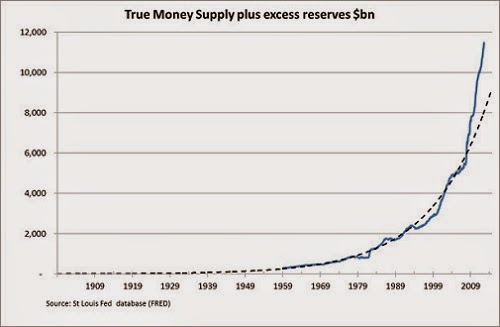 True money supply is the sum of cash, checking and savings accounts, plus a few other minor deposit categories. This measure of the money supply quantifies deposits that can be withdrawn at short notice, making it superior to other measures. The black dotted line represents an exponential rate of growth—the fastest rate at which this measure of money can grow without eventually tipping into hyperinflation. Today, the actual money supply is about $3 trillion above the hyperinflationary level. Thus to avoid monetary hyperinflation, $3 trillion must be withdrawn from the Fed and bank balance sheets. Ain't gonna happen.

We are already seeing early signs of price inflation, closest to where the money enters the economy. The wonkish name for this is the "Cantillon effect." Asset prices are rising, and the cities that are major financial centers are thriving, with prices significantly above those in rural areas. Next, expect raw materials and commodities prices to rise as foreign exchanges try to recycle excess currency.

I find the complete blindness to monetary hyperinflation in the economic and financial establishment remarkable, even in my most cynical moments. But there is no consolation in this knowledge—only the drive to prepare for what I consider inevitable nasty inflation.

Not all commenters agree with Mr. Macleod that 'nasty inflation' lies ahead;  some argue that deflation is a more likely trend, citing Japan's example.  However, there are so many intangibles out there right now (particularly the parlous state of the derivatives market) that it's simply impossible to predict with any certainty what's going to happen.  I remain convinced that whatever it is, it's not going to be pretty or enjoyable.