I haven't done many reviews of books or movies or other entertainment on this blog before now.  I think that'll be changing, because now that I'm writing for a living, I can appreciate better what goes into a truly creative, interesting product, and I'd like to highlight those that catch my eye. 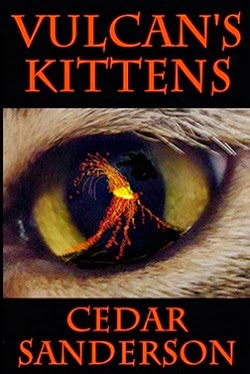 One such book is Vulcan's Kittens by Cedar Sanderson.  Miss D. and I had the pleasure of meeting Cedar and her partner at Libertycon 26 recently, and were immediately taken by her friendly good humor.  Miss D. picked up a copy of her book while we were there, and I finally managed to pry it out of her hands long enough to read it.  I can see now why she enjoyed it so much!

Vulcan's Kittens combines myth and legend from many cultures and periods of history, and plonks them all down in our time.  It's written firmly for the young adult market, from the point of view of a young teenage girl, but it's so well done that it draws you into her mindset, no matter what your own age or background.  In other words, it works for the adult market, too.  (At least, it did for me!)

I don't want to give away too many spoilers, but briefly, immortals are in conflict over whether to let humans develop technology that may raise them to their level, or destroy humanity in order to preserve their own position.  They've done that several times before, but this time some of the immortals are out to stop their fellows from doing it again.  Our young protagonist, Linnea, finds herself initially babysitting the children of one immortal, who takes the form of a cat - so inevitably her children are in the form of kittens.  Linnea is quickly forced to take a more active role, and defend the kittens while she's at it - but as immortal kittens get bigger, the question arises as to who's defending whom . . .

Vulcan's Kittens is a lot of fun, and I enjoyed it immensely.  Congratulations to Cedar on a great first book.  I want sequels!  Lots of sequels!  And I want an immortal kitty of my own!

I'd enjoyed chatting with Cedar on blog's before I met her in person, but hadn't quite gotten 'round to sampling her book.

Then, at a reading at Libertycon, a man in the audience was going on about how self-pub books weren't real books. The lively redhead in the beautiful blue dress in front of me turned out to be Cedar. She reached into a backpack, and popped out this book.

"This is certainly real enough! Look, it's a book! With pages, and writing, and plot! [something] dollars online, but I'm selling it at con price for $10, signed by the author!"

The gentleman in question stuttered, thrown out of his certainty, and I couldn't refuse the beautiful opportunity the universe had thrown in my lap. I pulled out my wallet. "Sold!"

A good book, an awesome author, and we can both be vaguely homesick for Alaska together, while Very Thankful for indoor plumbing! What more could I ask for? Except maybe the book back, now that my Calmer Half is done with it...

Peter's too. Maybe it's because of our mutual love for aviation, as well as our love for South Africa.
Was there new Year's eve in Johannesburg. I have never heard a more extraordinary celebration.
I thought WWW III had just ended.

The next day I attended the Kyalami Grand Prix, followed by a ride back to Port Elizabeth the following day
courtesy of Ford SA's racing director. Got to see some of the country up close with an excellent guide.
Some of it reminded me of western Kansas.

May you both live long and peacefully there.

Peter, thank you so much for the kind review! I'm tickled you enjoyed it, as I have enjoyed your book very much, and looking forward to the sequel now.

Meeting you and Dorothy at LibertyCon was a treat, and I have very much enjoyed our conversations. I'm working on another book (for grown-ups, this time!) but plan to begin the sequel-with-no-name as soon as the first rush of school is over this fall. Full time student plus work will slow me down, I know.

As for immortal kitties, well, you will have seen that a little bit into the book something potentially tragic happens. I showed that to my daughter, 13 at the time, and she came to me in tears to make sure the kittens were going to be all right. Hence, immortal! Growing up on small farms, I know all too well the sorrow of losing a beloved cat, so it was nice to make the book suit her rather than reality.

Any relation to Brandon Sanderson, or just coincidence?

No relation at all to Brandon Sanderson, although the last name led to an interesting situation at LibertyCon 2012 when he was there… they checked my room out, not his, when he left!