British Airways is testing the first of its new Airbus A380 super-jumbo aircraft, undertaking flights in and near England to familiarize crews with its operation.  As part of the test program, it'll be flying its A380 in formation with two Hawk trainers (flown by the US Navy as the T-45 Goshawk) at the Royal International Air Tattoo this weekend.

Here's a photograph of the A380 in formation with one of them.  Just look at the disparity in size! 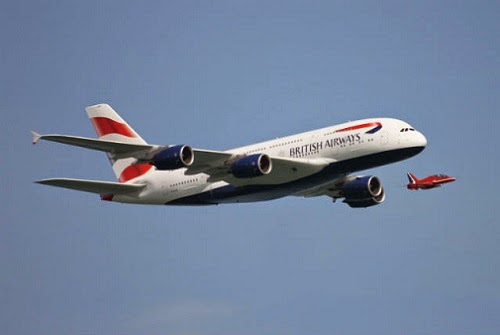 That really brings home how huge this airliner is.  The Hawk's fuselage is smaller in diameter than one of the A380's engines, and not much longer!  Read more about the flight here.

Caption:
BAE Airbus 380 superjumbo passes the bird ingestion test by passing a small trainer through one of its engines without damaging the engine.

@Billll, ...the pilot of the trainer wasn't as lucky.

A friend was working on an A380 and said you simply can't imagine how big that thing looks when you're standing on the fuselage, right in front of the tail!