A fleet of brand new Ford cars were reduced to a pile of rubble after their transporter driver's lorry became wedged under a low bridge.

The driver was attempting to take a short-cut to avoid queuing traffic when he collided with a 4.4m (14.5ft) high bridge near Long Itchington, Warks.

The top tier of five brand new Ford Focus cars were virtually flattened in the crash which happened at 8.30am on March 13 when the driver, from Merseyside, drove under the Snowford Hill railway. 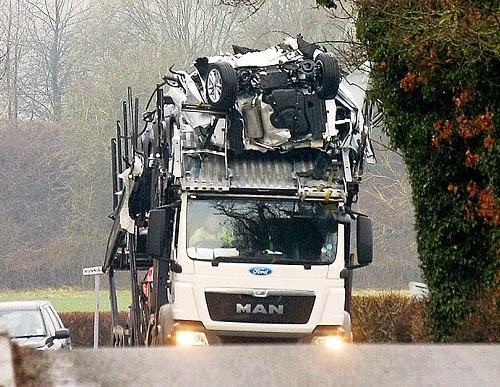 One motorist who witnessed the crash said: "It was like watching it in slow motion.

"It's a long road and it was pretty obvious the transporter was too high for the bridge but it kept going and suddenly there was a crunch and all these new cars got wrecked.

"The driver wasn't hurt but he looked as white as a sheet, he was no doubt trying to think of how he was going to explain it to his bosses at Ford."


There's more at the link, including more pictures.

I'd say the driver probably took a shortcut to end his career as well as his cargo . . .

There's a website devoted to just one such bridge.

And the low bridges are even very well mapped there if you ask the Automobile Association or use a lorry-driver's GPS unit.

At least it wasn't a double-decker bus.