[Sir Tim] Berners-Lee wanted the World Wide Web to be a place where people could share information across the world through documents and links navigated with a simple search function.

The first step to making that a reality occurred on August 6, 1991, and was hailed with little fanfare when Berners-Lee launched the first web page [shown below - click to enlarge] from his NeXT computer at CERN's headquarters in Geneva.

Housed at http://info.cern.ch, the founding website contained basic instructions for how the web worked, including how to access documents and set up your own server. CERN reinstated the page at its original address in 2013.

Another date rivals today as the actual birthday of the World Wide Web: March 12, 1989, the day Berners-Lee published his proposal for what he then called “Information Management”.

Primarily a business proposal, Berners-Lee conceived of the web as a way to prevent information loss in businesses and the scientific community.

At the time, he was working as a computer programmer at CERN's European Organisation for Nuclear Research, where he'd seen countless amounts of data lost because of high staff turnover and poor communication. And he'd looked on as researchers wasted weeks solving problems only to find out it had been tackled years earlier.

Within a year and a half, just before Christmas in 1990, Berners-Lee had built the infrastructure for the web and designed the first web page. He wrote the HyperText Transfer Protocol (HTTP), which outlined how information would travel between computers, and HyperText Markup Language (HTML), which was used to create the first web pages.

He also wrote the text for the first website that described the project and how others could get involved.

The site went live on August 6, 1991, and was housed on Berners-Lees' NeXT computer, the first server, which had a note taped to the front that said: "This machine is a server. DO NOT POWER DOWN".

I remember reading about that in technical journals in 1991 and 1992, while working in South Africa.  It seemed like just another development in the computer industry, one that sounded vaguely interesting, but certainly nothing world-shattering.  I'd been online already for several years, but was largely limited to the South African Post Office's implementation of the Videotex system, known locally as Beltel. 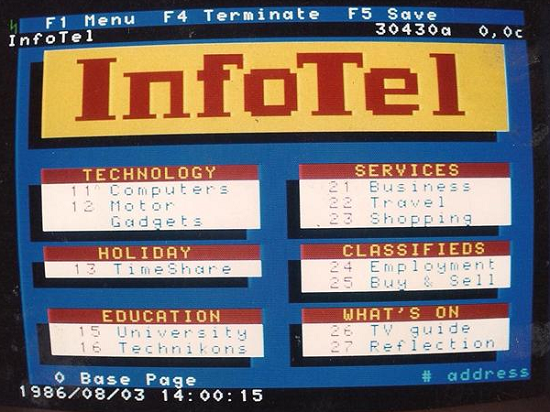 A Videotex screen. Each line was 40 characters across.


Introduced in the late 1980's, Beltel operated at the dazzling speed of 1,200 baud over dial-up modems.  During periods of high traffic, usually in the early evenings, speed might be cut to half that or less.  I can remember one screen of banking information (and oh, the revolution it was to be able to access my bank statement from home whenever I pleased!) taking over five minutes to download . . . and that seemed tolerable at the time.  Now, I'd be disgusted if it took five seconds!

Twenty-five years on from that first Web site, the Web has become indispensable.  Without it, modern commerce and industry simply could not function.  Today the so-called 'Internet of things' and 'cloud computing' (both impossible without the Web) are the buzzwords du jour.  What will the Web be like twenty-five years from now?  I don't know whether I'll be around to find out, but it should be interesting . . .

But do you remember Gopher?

@SiGraybeard: I read about it back in the 1990's, but I never had the opportunity to use it in South Africa. By the time I came to the USA in the late '90's, it had been supplanted almost completely by what we use today.

Did 3rd party computer maintenance back in the dark ages(early to mid-seventies). Spent a lot of time using Andersen-Jacobson dial-ups tied to A/J terminals in SS and medical offices. And in lawyers offices tied to the Lexus law-library. Fun times.

I thought Gopher was the greatest thing ever, just before I found Usenet, which opened the entire world to me. Ah, Vax...