A family in South Africa was involved in a traffic accident with a twist.  It happened several years ago, but the report has only just come to my attention.

This family were overcome with emulsion after crashing their car - with 25 litres [about 6½ US gallons] of paint on the back seat.

The four occupants of a blue Fiat were left drenched in the white mixture after smashing into an oncoming Opel, which also appeared to be white. 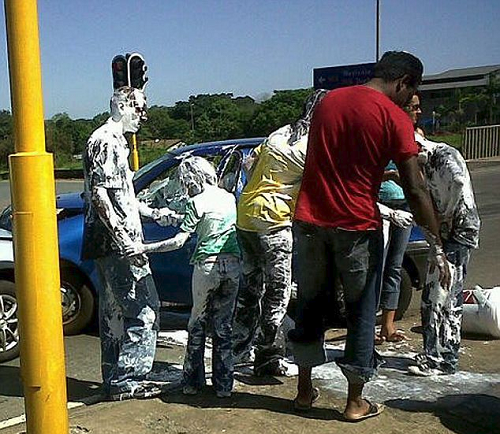 It is believed the huge tub of paint was on the back seat and catapulted forward during the impact - covering the interior and its occupants.

Luckily, none of the occupants - two adults and two children - were injured after the smash in the KwaZulu-Natal province of South Africa.

I'm sure some colorful language was used at the time . . . although I doubt it'll be necessary to whitewash what happened!

So, regardless of birth, they are now white? Once upon a time, many years ago, I had a friend at the local consulate of the RSA print me a form registering me as an "Honorary Colored", much as Julian Bond of evil memory was declared an "Honorary White". I would flash it when I started getting harassed in Black blues bars for being a Honkey musician. Wish I could find it, but it was many moves ago, and 3 moves equals one fire, as the man said.