Remembering a major feat of espionage


On August 16th this year, Israel's Air Force and Mossad secret service celebrated a fifty-year-old achievement that catapulted the nation straight into the big leagues in the intelligence world.

50 years ago today, a MiG-21 fighter jet was brought to Israel in a covert operation that received the name Operation "Yahalom" and as its name states, was the crowning jewel. In the operation, an Iraqi pilot recruited by the "Mossad" (Israeli secret service) defected to Israel with the aircraft and also provided instruction and maintenance material which proved very valuable for the security and reputation of Israel.

Brig. Gen. (Res') Yesha'ayahu (Shayke) Barkat, a fighter pilot who had served as a Squadron Commander and Flight Instructor and who was the Head of the IAF's Intelligence Directorate at the time of the operation, goes back to those days. He recalls the intelligence based operation and how Israel was the only country to succeed where many other countries had failed and acquire the aircraft that intrigued and threatened the west. 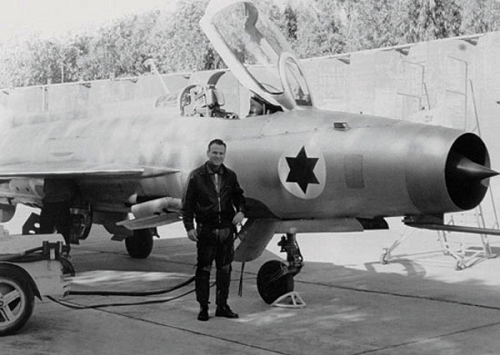 "The MiG-21 was the pride and joy of the USSR and after bringing it to Israel we flew it and fought against our fighter jets with it. We had a quiet and comfortable environment to train for 'dog-fights' with it and test its strengths and weaknesses. We learned its speeds, maneuvers, reactions and the field of vision from its cockpit - all of these helped us understand how to shoot it down", he shared. "These were the lessons that decided the 'Six Day' War. Moreover, acquiring the jet granted us an international status as an intelligence system and ushered us into the ‘International Intelligence Market' and to trading intelligence".


There's more at the link, including the story of the operation and more photographs.  Fascinating reading for aviation and military history buffs.

I was particularly interested to read the account of this operation, because I've seen the MiG-21 involved.  It was some time later, of course - in the 1960's I was still in school! - but I had the opportunity to view the aircraft and hear something about the operation from some of those involved.  They were still very proud of it, even years later, and with good reason.  Israeli Air Force pilots told me that they knew exactly where to aim along the fuselage of the MiG-21 to bring it down with just a few cannon shells, and used that intelligence to good effect during the Six Day War.

Good documentary from on the making of the Israeli Air Force is "Above and Beyond." $15 for the DVD or watch for free if you have Prime.