I've studied the Second World War for decades, and know a great deal about it;  but now and again, stories emerge that still surprise and enthrall me.  Here's another one.

In the First World War, she was decorated for staying by her patients’ side even while Germans stampeded through her hospital. In the Second World War, as a member of the secret service, she landed behind enemy lines to bring two commandos back to Britain. She would also, during that conflict, save the lives of British and American women imprisoned in Ravensbrück, the infamous concentration camp known as the “Women’s Hell”.

And yet, today, Mary Lindell is largely forgotten. Whereas other female secret agents have gone down in history for their contributions to the war – not least Nancy Wake and Pearl Witherington, who inspired Sebastian Faulks’s novel Charlotte Gray – Lindell died in relative obscurity.

Born in 1895, into a wealthy family, Lindell was one of the thousands of young women in the First World War who volunteered for the nursing services, signing up  for the French Red Cross. Known as La bébé anglaise by the French soldiers, she was awarded the Croix de Guerre, after staying with her patients when her field hospital was overrun by the Germans.

Between the wars, Lindell married a French count, with whom she raised three children. After the Fall of France, she took the sight of German soldiers parading the avenues of Paris as a personal affront. She recalled: “Some of us had to stand up to the Jerries. Who? I said to myself, 'Darling, you’re to do it.’ ”

In her first mission she escorted an ambulance convoy out of Paris to the Vichy zone of France, but rather than seize her own freedom by crossing into Spain, Lindell returned to Paris to set up an escape line. She helped Frenchmen wanting to join the Free French and British soldiers who had missed the boat at Dunkirk. For two weeks she hid Jimmy Windsor Lewis – who would later win the DSO twice – while she obtained false papers for him and charmed the Germans into giving her a travel permit out of occupied France. Her own cover was “to hide in the open” dressed as a nurse.

In early 1941, Lindell was arrested on suspicion of anti-German activities and spent nine months in solitary confinement. When released, she hid in Lyon for several months until she escaped with more false papers, this time describing her as an English governess. In Spain she persuaded the British secret service to send her home by flying boat.

Back in London, Lindell was taken up by MI9 (a branch of Military Intelligence, rather shorter lived than MI6), where she received the briefest of training before being sent back to France to help a team of commandos, charged with destroying German ships in Bordeaux, to get back to Britain. As a concession to her age – Lindell was 47 by this time – Lindell was flown into France in a light aircraft, rather than being forced to use a parachute.

Only two men survived the raid, Herbert “Blondie” Hasler and Bill Sparks. After disguising themselves as tramps, the commandos finally made contact with Lindell in a town called Ruffec. On seeing Hasler, her first remark was: “That moustache is going to come off; it reeks of England.”

Lindell helped the men on their way then smuggled their report to a covert radio station in Switzerland. She then returned to France to organise an escape line for soldiers and downed airmen.

She was caught again in November 1943 having just escorted a party of Allied airmen to a Pyrenean village. She was wounded while jumping from a train and, after a long convalescence, sent, in September 1944, to Ravensbrück, where tens of thousands of women were worked to death or died of starvation and disease or were gassed and cremated.

There, despite the obvious danger of doing so, she quarrelled with the authorities. “I threw my weight about a lot,” she once said. “I used to say, 'You’ve lost the war, you know perfectly well you have.’ And they knew they had too. It didn’t stop them. They were b-------s. The weaker the people, the more beastly they were.”

Lindell found work in the camp hospital, and from there gathered intelligence, smuggled food and clothes into the cell block and finally produced a list of American and British women – when the Germans denied there were any in the camp – to the Swedish Red Cross, who evacuated them – and Lindell.

The French awarded her a second Croix de Guerre and the British awarded her the OBE, but Lindell herself hated the adulation. “When they say I am a heroine, I am most embarrassed and I think it’s ridiculous,” she said. “One does a job, it is a job, but the heroine is all twiddle-rot.” Nevertheless, Airey Neave thought her one of the most remarkable characters of British Military Intelligence.

The article's material is drawn from a new book about Mary Lindell. 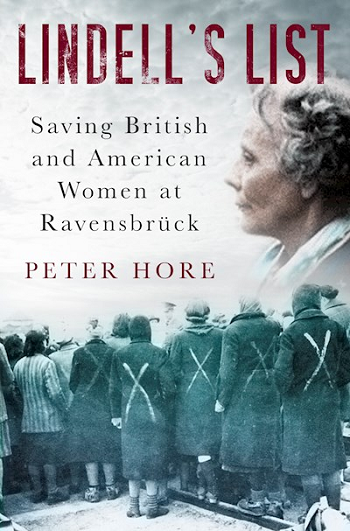 There was actually a television movie starring Judy Davis as Lindell in 1991. It was called One Against the Wind. Quite good (especially within the limitations of the period's TV movies). Probably worth tracking down after you've read the book.

Pre-ordered the book at Amazon.
Just now finished viewing the film at
http://wipfilms.net/uncategorized/one-against-the-wind/
Thanks for the lead, NJ.