For those who don't know the saying, it's a Latin idiom dating back to the Roman Empire meaning "In wine there is truth".

A photographer in London set out to show what wine does to his friends by photographing them at various stages during an evening:  before they began to drink, then after 1, then 2 and finally after 3 glasses of wine.  The results are often hilarious.  Here's just one example. 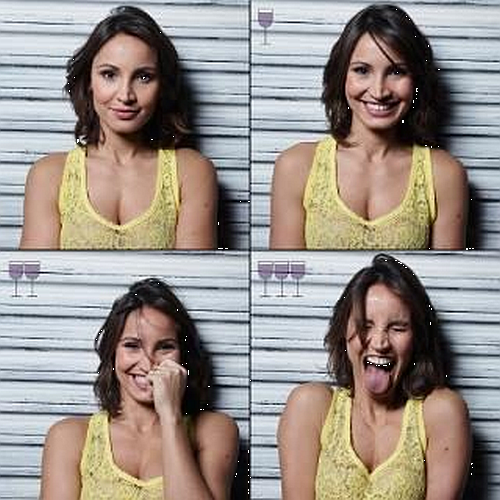 There are many more photographs at the link. I don't know what I look like after a few glasses of wine, but I hope it's better than that!

Labels: Boys and their toys, Food and Drink, Funny, Photography, Silly
Email ThisBlogThis!Share to TwitterShare to FacebookShare to Pinterest

It was nice of him to take only a few and then stopped.

"candy is dandy but liquor is quicker...."

They should have stopped after one, or at most two, glasses.

Wine is very sneaky for the uninitiated. Tastes like strong grape juice, fooling you into 'this isn't going to hurt me'. A few glasses of it will find you very unsteady - time to get to bed and deal with the room spinning off its axis. Wife has had a few lessons in that before she stopped drinking it - moderation and a few sips is all you need to relax.

I am so glad that I have ably demonstrated my ability to do and say outrageous things while NOT under the influence.