Recycling on a very large scale


It's nice to see life-saving equipment getting a new lease on life.

A New Jersey fire truck recently made a 3,700-mile journey to its new home in Managua, Nicaragua.

The 1982 Mack fire truck was loaded onto a 439th Airlift Wing C-5B Galaxy here Aug. 12, thanks to the combined efforts of Airmen from the Air National Guard, Air Force Reserve and active-duty Air Force, as well as a host of government agencies.

It wasn't an easy task, and it took an individual to recognize a country’s need for that fire truck and pursue it to make it a reality.

Master Sgt. Jorge A. Narvaez, a New Jersey Air National Guardsman with the 108th Security Forces Squadron, was responsible for getting that fire truck sent to Nicaragua. 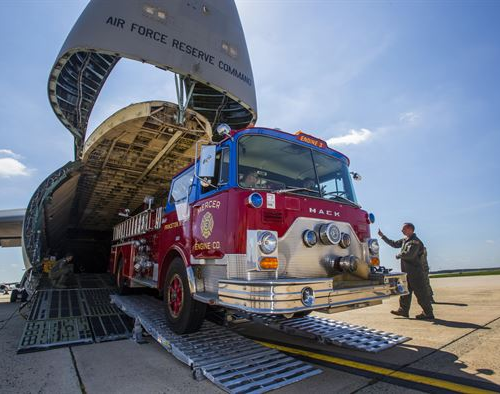 In 2014, Narvaez traveled to Nicaragua. While he was there, he visited the headquarters of the Benemerito Cuerpo de Bomberos, a group of volunteer firefighters located in Managua, the capital of Nicaragua.

“I saw that they were in dire need of serviceable fire trucks and equipment,” Narvaez said. “I offered to help and get them assistance in the United States. I explained to them that I couldn’t make any promises, but that I would try to do my best.”

Narvaez talked to Ray Wadsworth, the former fire chief of Mercer Engine No. 3 in Princeton, New Jersey, and was able to get some coats, boots and hoses that had been slated for replacement. Like their counterparts in Nicaragua, the Princeton firefighters are also volunteers.

The Nicaraguan firefighters were grateful for the donated gear, but their need for a new truck remained. In 2015, an opportunity presented itself.

The Occupational Safety and Health Administration informed Mercer Engine No. 3 members that they would have to replace two of their fire trucks. One of them, a 1982 Mack 1250 GPM pumper truck, could no longer be used because the open cab was considered a safety hazard.


There's more at the link, and also in this report.

Seems odd to me that a fire truck can be perfectly OK to use for decades, then suddenly be 'unsafe' because of the open cab it's had all along!  I doubt the Nicaraguans will have similar bureaucratic scruples.  May it serve them long and well.

It's because a bureaucracy that needs to justify it's existence must create more and more regulation to prove that it needs a budget increase in order to increase it's empire, rather than needing to be downsized as having accomplished it's original goals.

OOHHH man....don't get me started on "old equipment is obsolete" meme. I spent 10 years on our village fire department and ambulance department. I started out driving and riding a truck like that in the pic. Then the OSHA, smosha weenies got involved and our department had to "upgrade". We spent 100's of thousands of dollars to upgrade to "compliant" equipment. Had to have waayy tooo many bingo nights, catfish fries and other events to raise the funds.
Even now, the talk is that some of the manufacturers of fire fighting equipment were behind the national push to "upgrade" equipment.
Steve

We went through something similar about up-grading the pump for our lagoon in my small town in Kansas. Nothing wrong with it, worked great, was easy to repair. Wasn't two week and the new pump quit, so the old pump was pulled out of the equipment shed and hooked back up.

OT but I need some advice, hopefully that's all I need.
Think I pulled a major fumducker here.
Took delivery of my new Anderson AR15 today. Fired it for the first time, took it home for cleaning.

I qual’d on M16A1/2 thanks to that nice Mr. Reagan. Field stripping and cleaning was no problem.

Then, and this is entirely my responsibility, I reinserted the bolt without the charging handle. It slid home with a very final sounding click and yes, it is locked in place.

Is there an user-level drill for fixing this, or do I have to send it back out for service/repair?

Mr. McEnroe, I'll have to look for it, but I think I recently saw a review for a handy tool that is meant to be inserted through the mag well & pry the bolt back without damaging anything. I think it was meant to be an armorer's tool, but it was marketed as a good thing to have if one is in the business of putting many rounds through an AR-platform rifle at a goodly rate--folks with an APO/FPO address, for instance.
Sorry I don't have the info to hand.
Belay my last. Here's one I found, and there are likely others:

OSHA is awful, for the most part. Create a bureaucracy that has to constantly justify its' own existence and prove its' value, and you will get exactly that. OSHA and other 3rd party inspection and safety standard-setting agencies will always drum up business for themselves.

I had two new 600hp diesel-driven pumps on my boat. They were condemned because the instrument panel and wiring harness weren't intrinsically safe- essentially it was said that the wiring could cause a spark. Of course, the 500+ degree temperature on the exhaust manifold 18 inches away wasn't an issue. $120,000 later, we had 2 newer engines with an intrinsically safe sticker on the wiring harness.

To paraphrase the other commenters and my own experiences with that bloated BS bureaucracy, F OSHA. I'll just say my last contact with OSHA involved a shotgun, a demand to vacate private property and never return, and a Sheriff deputy. I 'won' that battle. F OSHA.

I'll add one other thing; a fed OSHA inspector, closing on retirement and feeling kind hearted, admitted to me that it is impossible to comply with every OSHA rule. That to be in compliance with one rule means noncompliance with another rule. He confirmed my suspicions. F OSHA. Those blankety blank busybodies...confiscating millions of dollars from lawful business. My oath is to shoot dead the next OSHA person who ever again dares to meddle in my legally conducted affairs.

Around here, there's a food truck company that uses these "old, obsolete" fire trucks - they converted them (they have at least three) into rolling pizza kitchens with a wood-burning oven in the back. It seemed odd to me that they'd use such normally-expensive vehicles, but reading about how departments are forced to get rid of still-good equipment, it makes a lot more sense...

Tennessee Bud, many thanks. I will look into that. Also gotta check with Anderson First since I don't want to violate warranty. Seems to be a good little rifle when it doesn't have a dumbass behind it.

Mr. McEnroe - what you're looking for is the "Manual Bolt Extration Device" from U.S. Bolt and Tool. $35 for single caliber, $45 for multi caliber. Insert through magazine well, engage face of bolt carrier (between the carrier and the bolt), pry it back. Pictures at the web site.

On the fire truck thing, I'm wondering why fire equipment companies (Pierce, American LaFrance, etc.) don't make a "drop in" auxiliary unit to fit in the beds of things like dump trucks, strap to a flatbed auto wrecker, or fit on a truck frame in place of a closed box (as in Penske, Ryder, U-Haul, etc. moving trucks). It would need its own power source (no PTO drive on dump trucks, etc.), water tank size would be limited and while it wouldn't be as efficient as a designed-from-the-ground-up fire truck it might be a budget way to get some fire fighting capabilities where there are presently fewer or none.

(Could be the fire equipment companies are already making something like this, but I haven't heard of it.)

You're kidding, right? Why would they make a competing product for those overchromed trucks that cost the moon? They might be sold overseas, but you won't see anything like that for public use here in the US, barring the complete overhaul of the various .govs that infest our land.

NFPA is the regulation that covers fire trucks. I believe open cabs were fazed out two or three standards ago and the grandfathered in ones had to be gone with the 2016 standard. Or there ISO rating or insurance were taking a beating.

Once again, we have petty bureaucrats making up new rules as they go, to justify their existence, with no oversight, and no regard to reality. It would be funny if it weren't so sad and expensive.

Part of their motivation is that they, like the EPA, derive a good chunk of their budget from fines levied on violations. No new rules, no violations, no conferences in Honolulu in February.

More and more, I find myself saying "I love my country, but I despise my government."

I for one worry about the fire department in Nicaragua, and hope they have the skills and equipment to keep the firetruck running.