Tom Kratman brings the smackdown to the election


Science fiction author Tom Kratman (whom I had the pleasure of meeting for the first time at LibertyCon last month) brings the smackdown to the current election campaign in this article.

You know, I’m not quite ready to march in the streets shouting, “Viva Trump! Viva la Junta! Viva! Viva! Viva!” On the other hand, for many a year now I’ve wanted to dance along the yellow brick road with the munchkins while singing, “Ding dong; the wicked witch is dead.”

So I am against a woman being president, right? No, not really. I am against this woman being president. On the other hand, if we could get Margaret Thatcher’s body from the Brits, bring it to Louisiana, assemble as many Voodoo practitioners as we can and import some more from Haiti, resurrect Meg’s corpse and grant her natural citizenship I would happily vote for her. (What’s that? Born, reborn; what’s the difference? And besides, Democrats don’t object to the dead voting – provided, of course, that they vote Democrat – so they can hardly object to the dead running for office.) Sadly, that’s not our choice. Our choice is Hillary or Trump or a hopeless third party candidate, presumably Johnson and Stein.

But Hillary? Look, if Hitler and Hillary were on opposite sides on the same ballot, I’d have to say, “Well, I’m only a quarter Jewish; how bad could Hitler be?”

And there’s another thing; Trump is pissed – dare I say “royally pissed”? – at the DC establishment that wants his money but shuns him. There’s a better than fair chance, and a better chance than we’ve had since Reagan who, at the time, had bigger sturgeon to slice, for us to have someone in the White House who may actually purge the bureaucracy that’s taken over the country. Oh, no, he won’t do everything we need and stand the upper echelons of the Agency and State, EPA, Justice, etc., against a wall with the Old Guard providing the firing squads. But he’s fairly likely to trim them badly enough to put the fear of God – which is to say the fear of you and me; “Vox Populi, vox Dei!” – into the remaining swine.

And then there’s what I think is the most important thing, the answer to the question of why Trump is even running. To me, it’s obvious: He doesn’t need graft or girls; he wants a better place in the history books than the one he’s earned so far as “slumlord to the elite.” He wants to earn that better place. This will tend to make him controllable, to make him at least try to keep his campaign promises in a way we haven’t seen since Reagan and defeating the Soviet Union. I expect that wall on our Southern border to go up. I expect him to repudiate the globalist “Free trade” agreements that have allowed the world’s piratical and parasitic “elite” to loot us, Russia, Europe, everyone not of their little class. I expect some bureaucracy trimming. Why? Because he’s such a great guy? No, because he wants that place in the history books.

Conversely, I suspect Hillary intends to, and is sure she can, dictate what the history books will be allowed to say.

Here’s what I suggest: First, check the polls for your state carefully and conscientiously ... If it’s a very safe state for Hillary or a very safe Trump state, you can either stay home in more or less understandable disgust or you can go to the polls and vote for Johnson, Stein, Mickey Mouse, and I’ll say, “Onward, brothers and sisters!”7 Indeed, in that case, I’d encourage you to vote for Johnson. Why? To remind a President Trump that there are some things he needs to do and that he’s not as invulnerable as all that.

But what if it’s not a safe state for anyone? That’s tougher. I can tell you what I’m going to do; I’m going to cast an effective vote against Hillary by voting for Trump. You can let your conscience be your guide. Flip a coin if you like. Just remember that one side of that coin you flip says, “Hillary for President; Death of the Republic.”

I might add that LtCol. Kratman is (literally) putting his money where his mouth is.

I’d quite possibly make between five and ten thousand dollars this electoral season from my first published novel, A State of Disobedience, which outlines my expectations of what a Hillary Clinton presidency is going to be like and to lead to. 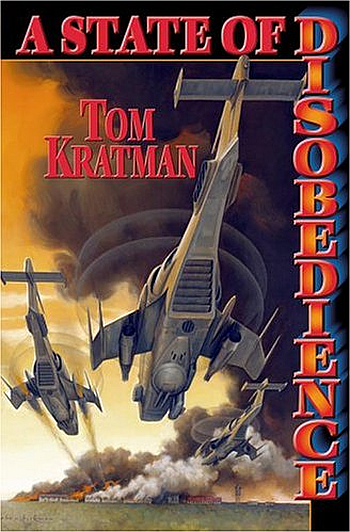 I always make extra money off that one during an electoral season and this season is really special. No, it’s not a huge amount but it’s not trivial to myself or most folks, either. It’s not, in my not so humble opinion, a great novel. It was my publisher’s idea, which he asked me to write up, and I do not play well with others. Still, if not great as a novel, it is kind of impressive for two things. One is the degree to which it drives lefties bonkers. Go read the one star reviews and you’ll see. The other is its prescience. Forget the date of 2063 on the cover, that was Jim Baen’s marketing ploy. In my mind, and by internal textual evidence, it was always set in and just after 2016.

Call it a gesture of both sincerity and the degree to which I think this election matters; I’m giving the book away from here on out as a free download. You can find it on Baen’s Free Library ... download the book, read it, encourage your friends to read it, and then contemplate just what name you want to mark down or in the voting booth.


I've read the book.  It's good.  I recommend it - particularly now that it's free to download.  Try it.  After all, what have you got to lose?

Kratman's book "The Last Centurion" also has a very interesting female president that is bat-shit crazy. Good book. Love what Kratman does to Detroit in it.

It also deals with Global Warming, GMO food, the green movement and so much more.

The Last Centurion is actually by John Ringo, but other than that I agree completely with the assessment that it is a fine dire warning of what might be.

As for the current election cycle, much as I knew she is far too smart to get involved, I would have jumped for joy if Trump had named Condi Rice as his VP.
And after four years having become bored with the whole thing, handed the reins over to Condi to really run the country.

I paid full price on Amazon. The KGB aparatchiks running the KommieKrat party and the Klinton Krime Konsortium have made taking anything free feel dirty, even gifts willingly given.

Condileeza Rice? God you cuckers are pathetic. This country was started by White men. Women do not have the temperament and objectivity to make the hard choices. That soft-headed Stasi shill Merkel is cold testament to not letting women leave the kitchen. And blacks? Five hundred years ago they were living in the Stone Age. Today in Detroit, Haiti, Zimbabwe, Sudan and elsewhere I see no discernible difference. We have seen ourselves how hateful and stupid these things are in reality. I do not intend to repeat this farce.

All of Col. Kratmans books are worth reading
but especially Caliphate a what-if book about the way Germany
snd Europe is going when unabated Islamic invasion continues and
the distortions forced on the U.S. by continued muslim terrorism.
Also, A Desert Called Peace and Carnifex-- how one military man,
on a future colony planet, responds to a 9/11 like attack that murders his family and threatens his world. Good reading.

Thatcher did ban almost all semi-automatic rifles in England. Did you guys forget that?

Baen's free library is the best kind of free market capitalism. The first taste is free. After that you've got to pay. A lot of their authors make the first book of a trilogy free once the last book is out.

Thanks for the tip it was a great little read!