. . . if they can afford it!  The Normandy Tank Museum in France is auctioning off its collection of Second World War vehicles, including everything from tanks to aircraft, bulldozers to LVT's, trucks to motorcycles.  It's a fascinating collection, particularly in the less common pieces.  For example, there are the well-known liaison motorcycles such as this 1943 Harley-Davidson WLA: 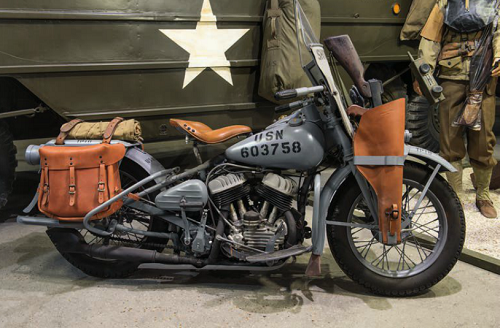 Then there's this much less well-known paratrooper liaison motorcycle (more like a 'liaison scooter', I guess) - the Cushman Motors M53-A, known as the 'Cushman Airborne'.  Several thousand were 'dropped in action' with US paratroopers in Europe. 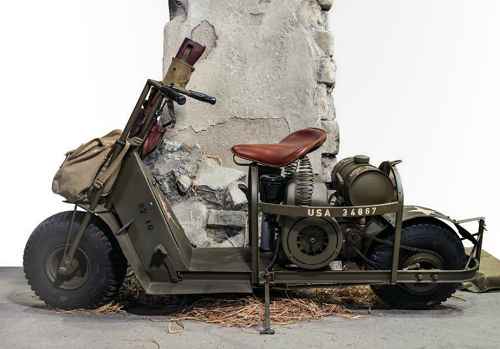 There are several tanks for sale, but I was particularly interested in this 1944 M7 Priest self-propelled 105mm. howitzer. 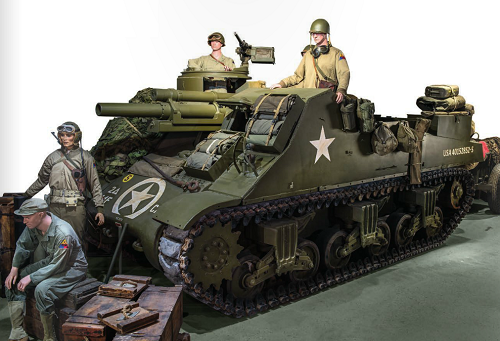 The reason I find it so interesting is that I saw in Africa the Canadian-built version of this gun, the Sexton, fitted with the British 25-pounder artillery piece.  (Yes, a World War II self-propelled gun really was in service up to forty years later!)

Finally, to deal with not just low-flying enemy aircraft, but also infantry on the ground, the M45 Quadmount with its four .50-caliber machine-guns was guaranteed to put a hurt on the enemy.  It was nicknamed the 'Krautmower' or the 'meat-chopper' for its impressive (and gory) performance in the latter role. 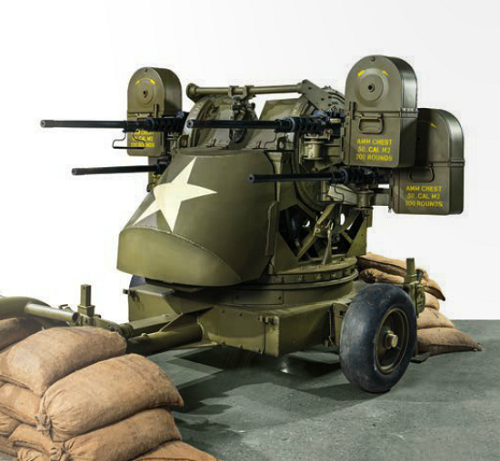 Put that at the head of your driveway, and you'll never be bothered by 'borrowing neighbors' again!

There are all sorts of other vehicles up for auction;  tanks, a Piper Cub liaison aircraft, even an LVT (landing vehicle, tracked) as used by the Marines in the Pacific (and by the US Army in river crossings and beach landings in Europe, too).  Most are in excellent condition, having been superbly restored.  For artillery buffs, there's even a genuine German Flak 88, complete with wheeled mount.

Larry Correia could be interested - he has to fortify a recently bought mountain, after all.

A treasure-trove of WWII pictures can be found here: http://histomil.com/viewtopic.php?t=3918&start=4130

There are many hundreds of pages of pictures. The collection starts off with formal, posed pictures and then progresses to photos that readers contributed. This link takes you to somewhere in the middle, about where I thought....gosh, I might want to come back to this...and book marked it.

I clicked on the links but didn't find out why they are selling the items off. Does anyone know why, as I'd think they'd want to preserve historical pieces.

That quad fifty mount was in use as late as the campaign in VietNam. I've seen those mounted on the beds of, I believe, five ton trucks although it may have been duece and a halfs, and used as convoy escort. regards, Alemaster

Development in tanks and other mobile gun platforms is a constant battle between guns and armor. One side builds a better cannon, the other develops armor to defeat it.
While ground troops are much better protected today against small arms they are still vulnerable to the effects of WWII artillery.

Years ago, Hughes Rudd, a reporter for CBS wrote of his experience as an Piper Cub flying artillery spotter in Europe during WWII. The one thing I most remember is that he was present when they uncrated his aircraft and he learned, from the markings, that the crate cost more than the plane it carried.