The damage inflation is doing to YOU every day


A couple of weeks ago I put up two articles about inflation:  its real rate, and what this has meant for our purchasing power, and what it will continue to mean in future.  Now Charles Hugh Smith, whom we've met many times before in these pages, is publishing a series of articles in similar vein - and his conclusions are equally sobering for our future.

In the first article, titled 'The Burrito Index: Consumer Prices Have Soared 160% Since 2001', he says the same as I did about the real rate of inflation.

In our household, we measure inflation with the Burrito Index: How much has the cost of a regular burrito at our favorite taco truck gone up?

Since we keep detailed records of expenses (a necessity if you’re a self-employed free-lance writer), I can track the real-world inflation of the Burrito Index with great accuracy: the cost of a regular burrito from our local taco truck has gone up from $2.50 in 2001 to $5 in 2010 to $6.50 in 2016.

My Burrito Index is a rough-and-ready index of real-world inflation. To insure its measure isn’t an outlying aberration, we also need to track the real-world costs of big-ticket items such as college tuition and healthcare insurance, as well as local government-provided services. When we do, we observe results of similar magnitude.

The takeaway? Our money is losing its purchasing power much faster than the government would like us to believe.

In the second article, 'Inflation Hidden in Plain Sight', Mr. Smith reminds us that much inflation isn't shown only in prices - it appears in smaller quantities and lower quality, all charged at the same price as before.

Can we be honest and say that many of the reductions in value, quantity and quality are actually instances of fraud?

... price inflation doesn't necessarily reflect all the inflation that's hidden in plain sight in smaller quantities and declining quality. We've all observed prices of consumer items remaining the same while the amount of the product we receive for our money is less than it was a few years ago.

While a reduction in product quantities can be easily calculated, reductions in quality are harder to discern and calculate.

Consider the quantity and quality of the paint being applied to kitchen appliances. Although I can't quantify this, I've noticed appliances such as ranges and refrigerators are now prone to rust along the bottom edges in a few years because the manufacturers no longer apply much paint to surfaces and edges that are not visible, for example the underside of the steel exteriors.

This sort of rust was unknown in older appliances, or would only be visible after decades of service, not a few years.

I also notice that the paint is now so thin that scrubbing will in some cases remove the top layer of paint.

These reductions in quality may be the result of corporate cost-cutting or planned obsolescence or both. The net result is a form of inflation/loss of purchasing power as the price does not reflect smaller quantities and reduced quality/ service life.

In a third article, titled 'Revealing the Real Rate of Inflation Would Crash the System', Mr. Smith writes:

What would happen if the real rate of inflation was revealed? The entire status quo would immediately implode.

Here are a few of the consequences:

2. Global investors might start demanding yields on Treasury bonds that are above the real rate of inflation. If inflation is running at 7%, then bond buyers would need to earn 8% per year just to earn a real return of 1% ... Bond yields of 8+% would collapse the status quo of massive government deficit spending.

3. Private-sector interest rates would also rise, crushing private borrowing. How many autos, trucks and homes would sell if buyers had to pay 8% interest on new loans? A lot less than are being sold at 1% interest auto loans or 3.5% mortgages.

4. Any serious decline in private and state borrowing would implode the entire system. Recall that a very modest drop in new borrowing very nearly collapsed the global financial system in 2008-09, as the whole system depends on a permanently monstrous expansion of new borrowing to fund consumption, student loans, taxes, etc.

Who's being destroyed by 7+% real inflation? Everyone whose income has stagnated and everyone who depends on wages rather than assets to get by--in other words, the bottom 95%.

The collapse of asset inflation will implode all the fiscal and financial promises based on ever-inflating assets.

Destroying the return on cash with ZIRP and NIRP (negative interest rate policy) has forced capital to chase any asset that offers any hope of a positive yield. As asset inflation takes off, the capital gains attract more capital (never mind if yields are low--we'll make a killing from capital gains as the asset inflates further) which creates a self-reinforcing feedback: the more assets inflate, the more attractive they become to capital seeking any kind of return.

In effect, gambling on additional future asset inflation is the only game in town.

With the cost of borrowing less than zero once the loss of purchasing power (i.e. consumer price inflation) is factored in, it makes sense to borrow money to increase speculative asset purchases to leverage up any gains from future asset inflation.

The question that few ask is: what happens to pension funds that need 7.5% annual returns to remain quasi-solvent when asset inflation turns into asset deflation, i.e. assets decline in value?

There are only two ways to keep asset inflation alive: one is for central banks and states to buy up major chunks of all asset classes, i.e. hitting every higher bid regardless of the risks of such a strategy, and the second is to pay households to borrow money to chase future asset inflation, for example, paying households to buy a house with a mortgage:

The insanity of these two strategies is no hindrance to their implementation. The collapse of asset inflation will implode all the fiscal and financial promises based on ever-inflating assets and reveal the unsustainability of the status quo's strategy of substituting debt and asset bubbles for stagnating real income.

I'm looking forward (with trepidation) to Mr. Smith's last article in the series tomorrow.  It promises to make unsettling reading - but I can't argue with any of his conclusions.  They're merely an expanded, more in-depth version of what I said a couple of weeks ago.

If you'd like to understand the financial, fiscal and economic nuts and bolts of where we are today and how we got there, I'd like to recommend two books.  The first is Mr. Smith's new offering, 'Why Our Status Quo Failed and Is Beyond Reform'. 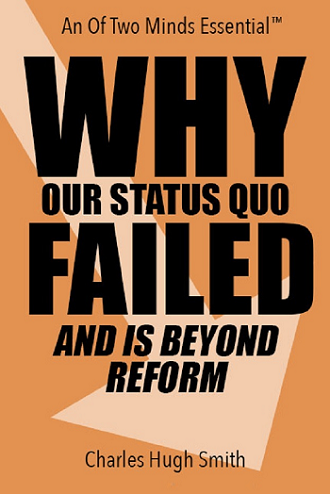 It's a short book and easy reading, free to Kindle Unlimited subscribers, and value-priced for those that aren't.  I think it's very useful reading to understand why our present economic system is headed for a terminal fall, whether we like it or not.

The second book is Karl Denninger's 'Leverage: How Cheap Money Will Destroy the World'. 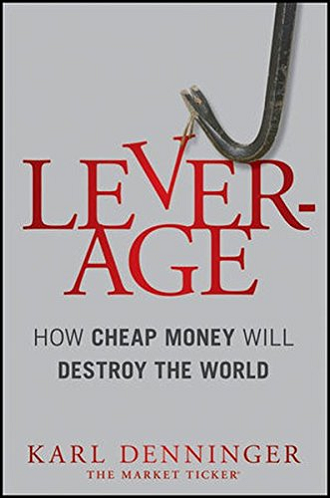 It dates back to 2011, but is as timely and topical today as it was then.

Both books are well worth your time and attention.  Highly recommended.

I use the cost of a half-gallon of milk and the increasing number of 14oz pints and 28oz quarts in the market-place. That half-gallon of milk now costs what a gallon cost just a few years back. And check the weight on just about anything pre-packaged these days. Nothing weighs 16os or 64oz anymore.
And the meal at my favorite eatery which cost me $5.39 when I started going there is now $8.69. Hell a glass of Coke in most places now costs more than a beer.

I could go into detail about the inflation and manipulation in farm commodities. Suffice it to say producers are getting thoroughly boned and the speculators, middle men and agrigiants are getting rich. All by design.

Using the "burrito index" -- In 2002 I could buy a burrito and a large drink at the local dive for $4.54. I recall the number becuz it was around the corner from work so I went there 1-2x per week.

I bought the same burrito and a large drink there last week and it cost me $7.92.

While the "burrito index" is cute it has flaws that make it unreliable and non-transferable (unless you never go anywhere else). The truck owner could have raised (or not) his prices out of pace with inflation. So a one-person decision maker is a poor indication of the rest of the world. Also, as mentioned above, portion sizes are being manipulated to intentionally obfuscate true cost and comparisons.

A better index is the Big Mac. Its corporate pricing, transferable (and thus comparable)across the country. Portion size is no-doubt being manipulated so thats an issue (and I suspect the biggest problem). The cool thing is that it also works internationally, but that is a better indication of currency rates and economy rather than local inflation.

It's not about inflation, but even The Economist has (had?) something called the Big Mac index (they used to track currencies with it). Not such a weird idea.

The pickup example suggests a rate of about 3.6%.

Relying on ones memory for the price of something 20 years ago is an iffy proposition.

In '83, the interest on my new truck was 13%, when I finally gave the ok to do the paperwork. It started around 17%, but I went home, and they kept calling for a couple days, and the rate dropped every time they called.

"This sort of rust was unknown in older appliances, or would only be visible after decades of service, not a few years."
Of course my old appliances lasted decades, my new ones last about 5-8 years.