I wrote recently about the problem of living paycheck to paycheck.  (Comments on that post are also worth reading.)  Today, we're seeing complaints from many Federal workers that they don't know how they're going to cope with the lack of a paycheck during the current government shutdown.  I know several younger people who are currently living at home with their parents, because they can't afford to live on their own . . . but all of them have recent-generation smartphones, and buy clothes at fashionable stores, and eat out with their friends several times a week.  Very few of them contribute to their parents' household budget - and for that I blame the parents as much as I do the children.  From the time I left home, if I visited my parents for more than a few days at a time, it was expected that I'd contribute towards the extra expenses they incurred by providing for me.  There was no issue about it;  it was simply the done thing, and I was glad to do so.

Those realities make me wonder how it is that no-one's taught younger people how to manage their personal budgets, and take charge of their financial lives.  It may be because their parents lived in a financially irresponsible way, of course.  Schools have never covered such a subject, at least in the countries where I've lived.  However, it's not difficult to get the financial education one needs.  There are lots of independent sources for it.

One of the best, in my experience at least, is Dave Ramsey's books and courses.  I'd learned many of the lessons in his most popular book, "The Total Money Makeover", before ever I'd heard of him, but I was glad to find them all in one place and so easily accessible. 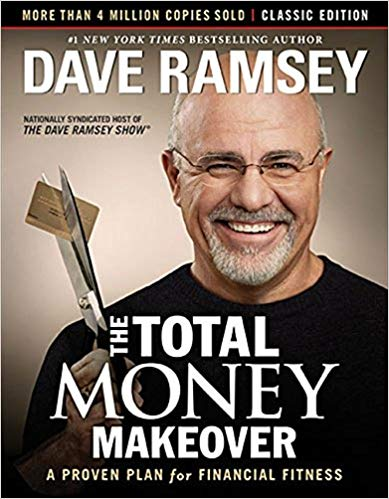 Since then, I've usually kept at least one copy of that book on hand, to give to those who are struggling financially and help them reorganize their finances and their lives.  It's that good.  If you haven't read it, or learned Ramsey's basic financial approach from his Web site, I highly recommend investing in a copy, studying it carefully along with your significant other, and applying it.  Teach your children its methods, too.  They'll thank you, later.

Once you're applying Ramsey's methods (or those of any other competent financial guru of your choice - there are plenty of others out there), you can start to turn your financial life around.  It becomes a matter of spending what you need to, rather than what you want to, and living that lifestyle from now onward.  It also becomes a matter of reorienting your life and looking for better opportunities if necessary, as I covered in my earlier article.  The two go hand in hand.  A better job and more money won't help you if you're spendthrift.  Financial discipline in and of itself won't get you a better job and/or more money - but it'll help you make the most of what you have, and give you a foundation for growth.

Above all else, it's time to get off the consumer bandwagon.  Our modern economy is dominated by the "spend at all costs!" attitude - buy what you want, when you want it, even if you don't need it or can't afford it.  We have all sorts of Web sites offering daily e-mails containing "bargains" or "must-have items", none of which are either bargains or needed.  Unsubscribe from them.  Cut up your credit cards, except for one in case of emergencies.  If you use a credit card (as Miss D. and I do), pay down any outstanding balance, and then get into the habit of paying it off in full, every month, so you don't incur interest charges at exorbitant rates.  Don't buy on credit unless you absolutely have to, and then only for items of medium- to long-term value, such as a vehicle or a home.  If you need something, save up for it, or try to do without it.  Live debt free, as far as possible.

Above all, get used to the fact that no-one owes you a living.  Too many people today believe - or want to believe - that the Government must and will provide everything they need.  Can't afford medical insurance?  There's Medicaid, or Medicare when we're older.  Can't afford to save for retirement?  There's Social Security.  Can't afford to buy a house with a commercial loan?  There's Fannie Mae, or Freddie Mac, or the VA, or any number of other government assistance programs that allow you to buy a house with minimal money down and low repayments.  (Of course, if you can't pay even those, your home can still be taken away from you in foreclosure - but some politicians argue that the government should forgive or take over your loans in that case, so you can carry on living there.  It gets them votes.)

The upshot of that "government-will-provide" attitude is our current budget, where entitlement programs dominate spending on federal and state level, and are steadily driving our nation into bankruptcy.  Remember, if it's too good to be true, it probably is.  As economist Herbert Stein pointed out, "If something cannot go on forever, it will stop."  When the burden on our economy becomes too great, all those assistance and entitlement programs will grind to a halt - and then where will the people be who'd come to depend utterly on them?

Don't be one of them.  Take charge of your financial life now, while you have time, and make sure you're in as good shape as possible, monetarily speaking.  Even if that isn't very good, it'll probably be better than most of those around you when the crunch comes.  In particular, pay attention to Ramsey's (and others') advice to build up an emergency reserve fund.  It can be a life-saver.  I've learned that lesson the hard way already.

Learning finances is a skill that passed me by, but my wife was taught & she has educated me. Well it's an ongoing process, I'm still a little too free with my "wants" when it comes to a a kindle book that I think I need...

Back to your blog... Medicare & social security were paid for by me my whole working life & it was not voluntary. Now that I'm over 65 I don't mind :-)
Plus I've just now learned to save... but saving WAS something I had to learn to do.

I will add something to your thought..If you have savings and low debt or no debt, it gives you a sense of freedom, to control your own destiny, you are not a "Wage Slave" anymore. If you are working at some place you hate, it gives you the freedom to leave if you want to and find something better.

I know a guy who pulled in $150K in an insurance settlement. He was poor as a church mouse. He went out and bought $150,000 in lottery 'scratchers' and saw something like a $9,000 return on investment. Then he approached me for money because he was broke.

I had to learn on my own. My parents never shared budget information with me, but once I moved out (actually, before I moved) I calculated the cost of living and decided up front just how much I could afford for rent and utilities.

All that said, it's a lot easier to accumulate $4,000-plus in credit card debt, but it's tough to pay it down to zero. After I did that, I have always paid off my credit card balance every single month, much to the dismay of my credit union. I also paid off my car loan early and saved a few bucks that way. My current car I paid in cash, as I did my current home. Yeah, you read that right. Just try it sometime. You get a lot of odd looks and the realtor keeps repeating herself about approval. Another oddity is that you can afford to buy the house, which gives you a lot of choice. In Columbus, a cursory search resulted in over 200 homes that I could afford to buy right now, today. I don't have to buy any of them, and I don't have to hurry hurry hurry and close before someone else snatches it up. The first time the realtor tried that on me, I told her to let the other buyer have it. Fun!

Hey Peter, this is the sort of post I'd love to leave some comments about, but the lack of an anonymous options makes that unwise.

I know you had a spam issue, but there are solutions to that.

I often listen to Dave Ramsey’s call-in program during my drive home from work. Despite some disagreement with his absolutes, most of what he advocates is solid common sense.

Disagreements are on areas where he’s dealing with people that have poor impulse control, so make some sense in context. He insists you should get rid of all your cards - not practical if you travel, rent cars, etc. Like you, we treat pay off the principal each month, and haven’t carried a balance in years.

What strikes me about his callers is how simple - not easy, since it requires self discipline for months or years, but straight forward - most of their situations are to deal with. And how in many - most - cases they knew the solution but needed to have someone else reinforce it: no luxuries, don’t buy on credit, live on “beans and rice, rice and beans” while paying off your debt, buy only what you need, not want . . . Common sense. And knowing the difference between “I want” and “I need.”

On Medicare and Social Security: yes, they are both Ponzi schemes (I’ll never get as much from either as I’d have if the same amount had been invested) but you should - absolutely - use them when entitled, to get at least some of your money back.

But for those who’ve always earned below the median they are both welfare - the medical coverage costs are far more than they put in, and the monthly SS check matches or exceeds most investments. Those of us who had incomes near or exceeding the minimum are the ones being shortchanged - we get the same medical coverage while paying far more, and get far lower monthly benefits for each dollar paid in in SS.

Take advantage of both, but do your best to have other resources ready.

Medium, not “minimum” above.