One of the best books ever written about apartheid South Africa...

If you want to understand something of apartheid-era South Africa, Rian Malan's book "My Traitor's Heart" is one of the few volumes I regard as indispensable. 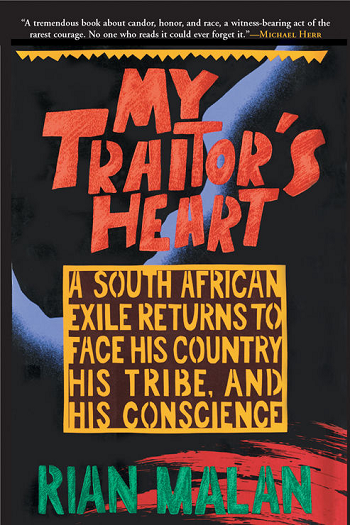 Mr. Malan writes as an Afrikaner whose eyes were opened in his youth to the folly and impracticality of the apartheid system - but he didn't fully grasp its actual, innate evil until he returned to South Africa as an adult.  His book is a searing memoir of awakening, a documentary of the murderous blind hatred that overtook so many groups and individuals in South Africa during the 1980's and 1990's, and at the same time a vision of hope that has sadly remained unfulfilled . . . at least, so far.

Rian Malan’s classic work of reportage, My Traitor’s Heart is at once beautiful, horrifying, and profound in ways that earned him comparisons to Michael Herr and Ryszard Kapuściński and inspired the London Times to call him “South Africa’s Hunter S. Thompson.” An Afrikaner, Malan is the scion of a centuries-old clan deeply involved in the creation of apartheid. As a young crime reporter, he covered the atrocities of an undeclared race war and ultimately fled the country, unhinged by what he had seen.

Eight years later, he returns to confront his own demons, and those that are tearing his country apart. With unflinching candor, Malan explores the grizzly violence and perverse rationalizations at the root of his nation’s identity.

Written in the final years of apartheid’s bloody collapse, My Traitor’s Heart still resonates, offering a “passionate, blazingly honest testament” to the darkest recesses of the black and white South African psyches. “Those who read it will never again see South Africa the same way” (Los Angeles Times Book Review).


I can't recommend this book too highly.  If you have any interest at all in a country torn apart by racism and xenophobia, particularly in the light of the divisions increasingly apparent in these United States, you owe it to yourself to read it.  If you miss today's e-book special price, it's still worth buying at full price.  I have three hardback copies, in order to have spares to lend to friends, which gives you some idea of how much I value it.  I was there through many of the events he describes, and I can confirm that his account rings true.

"My Traitor's Heart" isn't light or easy reading, and may make you feel very uncomfortable in parts, but it'll make you aware of the realities of a terminally divided society as few others will.

Tangent; I wonder if you have read the Suid-Afrika novels by Robert Frezza, and if so what you thought of them.

FIRE IN A FARAWAY PLACE

@C.S.P. Schofield: Yes, I've read them. Somewhat far-fetched, but not a bad portrayal of the Afrikaner mindset.

I think "The Solution" would have been better (Francis Kendall & Leon Louw) -- Swiss tribal cantons with lots of autonomy.

Apartheid was terrible, and worse in Rhodesia. But as Rhodesia changed from a breadbasket exporter to a poor, often subsistence agro - Zimbabwe, many blacks there now wish the whites would return and re-colonize. (Won't happen).

In S. Africa, Nelson Mandela (the socialist terrorist prisoner for decades) was magnificent on trying to keep S. Africa together, but he couldn't make the ANC more capitalistic friendly.

What is justice after a long history of injustice? There is not consensus about this. But the blacks now who are murdering whites are already fighting a low level race war. It's likely to get worse, before it gets better -- and S. Africa is likely to drift downward, more slowly then Venezuela perhaps, but the same direction, and maybe even faster.

Remember the lesson - It's fine for blacks to kill whites, but it's never acceptable for whites to fight back.

And when whites build a country, they owe it to the barbarian invaders to turn it over to them.

Don't believe me? Just watch the news or read the paper. RSA is our future if things don't change here really soon.

The Power of One, by Bryce Courtenay was a good book, as well. I don't have any experience of South Africa to state how well the book reflected the reality, but I doubt it was far off the mark.

(A movie was made from the book, and Daniel Craig - the current James Bond - had a part in the movie. I believe it was his first role in a film, but he did an excellent job.)

Also, did you know that the communist, Nelson Mandela, was married to the person who started the phenomenon called "necklacing", where a rubber tire is hung around a person's neck, the tire is filled with gasoline, and it is set on fire. IIRC, Winnie Mandela's first victim was a 16 year old girl who was accused of saying or doing something Winnie didn't like, so she got "necklaced. I believe it was later determined that her accuser had lied, and that she hadn't actually done what was claimed.

Feel free to correct me if I have my story wrong, Peter. I read that Winnie and her followers did this to a number of people she didn't like, especially political opponents. Far be it for communists to engage in dialog, in debates, or other non-violent means of getting their point across. The deaths attributable to socialists/communists during the 20th century exceed 200 million. 200,000,000 people. That does _not_ included deaths caused by fighting wars (although some of the deaths occurred during wartime).

it was the role of the British Armies to have fought and lost so much and then to surrender all over 200 years.So many times they were there to fight for the light of civilization and then, after, to fight to snuff it out. I think my country was the first but the rebels slowly forced it out and it grew and grew and yet I think they sent their very best and brightest overseas because the England today is nothing but a sad shower.

I suspect that the flower of England emmigrated, the best of the last died at Ypres and The Somme and the little sack of no account that is Britain today reflects the loss of the people that forced Magna Carta on an unwilling king.

Thanks for the prompt reply. That answered exactly the question I had.

"Grizzly violence"..I had no ideas the bears had a foothold in South Africa.

FWIW, Rhodesia never had apartheid. It was white-run, but did not have apartheid.