When the S really does HTF


Many readers will be familiar with Selco Begovic and his so-called "SHTF School", where he teaches the lessons he learned the hard way during the Bosnian War from 1992 to 1995.  He's just published a new book, "The Dark Secrets of SHTF Survival: The Brutal Truth About Violence, Death, & Mayhem You Must Know to Survive". 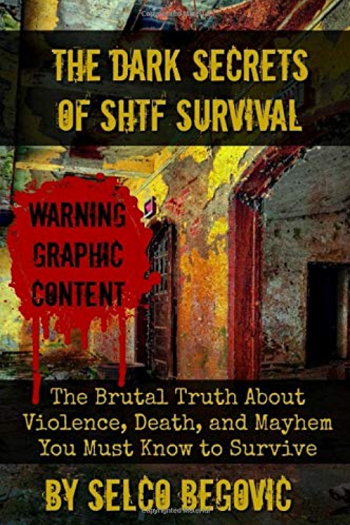 Before I speak of  his book, let me remind you that I've been in many emergencies and dangerous situations:
I'm intimately familiar with the stresses of disaster, both natural and man-made, and what they can do to people and societies.  I think I'm pretty well qualified to review Selco's book.

Selco has written a truly superb insider's story of his own experiences during the civil war in Bosnia. He perfectly describes how things went to hell in a handbasket with almost no major warning signs - only trends that most people (including himself) dismissed as temporary or passing problems. His descriptions of foraging for food, defending himself and others, trying to help his extended family to survive, and the lasting effects of his experiences on himself and those around him, ring absolutely true.

I've seldom read a more brutally factual account. This is an indispensable book for anyone wanting to understand how a situation such as that in Bosnia (or many other places around the world, for that matter) can (and will) strip the veneer of civilization away from anyone and everyone, and force us all into a survival mode that we'd rather not even think about. When it's a matter of survival of the fittest, and every person or family for themselves, it's... it's very bad indeed. I know. I've been there multiple times, and seen it for myself. I've seen how it changed me.

I can't recommend this book too highly. It's essential reading for anyone interested in emergency preparations, even for a lesser emergency than civil war.  It's also definitely relevant to the schism in US society we're experiencing at present.  If that schism should go any further, this might be a grimly prophetic book indeed.

As a matter of fact, Selco's book has got me wondering whether I shouldn't write one of my own, about the lessons learned in SHTF situations in the many and varied circumstances in which I've found myself over the years.  I must think about that.

I read Selco's book last week. Most excellent and your review matches my views of his writing. The Bosnian Civil War is not a route we want in the USA. I always remember the expressions, "No plan survives contact with the enemy" and "The enemy always has a vote". Would get very, very ugly very fast.
Your idea of a book about your experiences is one that I would certainly purchase. Better to study history so as to have an idea of what worked in bad situations.

Selco used to have a blog that was very interesting reading. It has since disappeared, or at least I can't find it. I may have to pick up that book.

yes, please write the book. I will definitely buy it. you have real life experience in many areas of civil unrest. and survival in those conditions, what worked well, only barely worked or was complete failure.
thank you

Write your book - the more info out there the better

If you write the book I will definitely buy it.

write the book. At the very least, it's good practice. You do rite gud, yaknow.

Another vote for Peter writing about what he has seen and looking back over events that both led to the disturbances and were missed by most everyone. I will but Selco's book. If Peter writes one - or more - I will buy them.

And another vote for you to write a book based on your experiences. Those that have been there and done that I find are the most valuable, and can tell the rest of us what did work, what didn't and what you wished you had done instead. Pearls of Wisdom are valuable to all.

If I may, additional value in such a book could be gained by incorporating the perceptions of a select very few competent close associates whose experiences paralleled yours. I don't mean "what Bob (or Larry or Suzy) did" but when Situation A was unfolding you had a perception of it and they did also, but from a slightly different vantage point and experience base. A parallax view, in other words.

Please do so. A voice of reason and truth about Africa is needed in these dark times, especially as we watch South Africa descend deeper into hell.

Too many people don't understand the evil that you have seen, don't believe the evil that existed and still exists. I know, the people that need to read the book are the very ones that won't believe it, but you can get to the fellow travelers, so to speak, of the 'heads up the bums' people.

Another vote for write the book. You write well, in other words, clearly. The more knowledge we can learn without going having to go through the situations, the better.

Thanks for the recommendation of this book, Peter. Many (most) people do not understand the fine line between civilization and chaos, and how the naivete of many well-intentioned people can be used against them by those wishing power. As for writing a book of your own, I agree with those above - and not just on SHTF situations, but on the evil that lives among us, that passes by most of us without a notice.

Do write the book. This is definitely something I'll buy as soon as it comes out. Your experience surfaces in your novels, but I'd rather have it without the sugar coating.

I have not read a good book, in fact have not read any books, in way too long. I just ordered this one on your recommendation. I am sure I will enjoy it and if I do I will pass it along to my son.

All the best,
Glenn B

You can find some of Selco's articles at this location:

I'd read some collections of his writings over the years. There is NOTHING like someone who was actually there for learning about it.
I put the book on my list.

Thanks for passing this along!

> Selco's book has got me wondering whether I shouldn't write one of my own,

what people don't seem to remember is that bosnia was part of Yugoslavia, a first world nation, complete with democracy and even the Olympics. in days it became hell. I served there on a "peacekeeping" mission. several years after nato intervention it still wasn't much of a life there for the people. even today the hatred runs deep and many fear the killing will start anew. if anybody thinks the rest of the world will save us, guess again, and read LOVE THY NEIGHBOR. I still hold a grudge with the u.n. for their actions or rather inaction there. and when they come here, well, they better not come here......

Another Vote for "Write the Book".
Your viewpoint is invaluable.
I wish Kim DuToit would write one as well. I'd like to see the comparisons between your viewpoints.

Thanks for the recommendation on Serco's book: purchased and devoured. I would definitely read a book of your experiences in the same vein.