I share the sadness of millions around the world at the loss to fire of much of Notre Dame Cathedral in Paris yesterday. 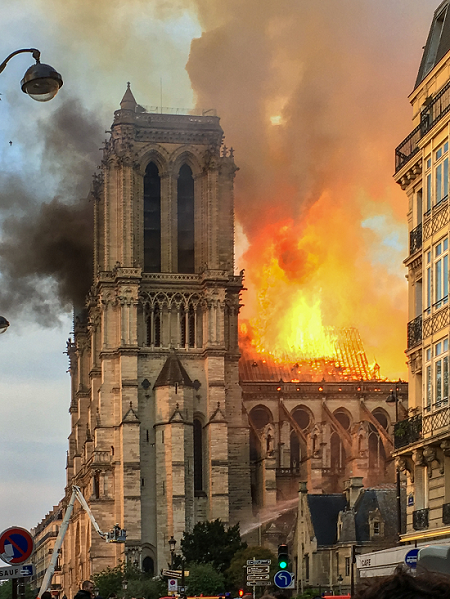 In cultural and historical terms, it was a tragedy of the first magnitude.  What's lost can be rebuilt, but the original can never be replaced.  Of greater cultural import, at present it's believed that something like 70% of the religious relics housed in the sacristy at the cathedral have been destroyed, or are still not accounted for.  Their loss (if confirmed) will be a grievous blow to the Catholic Church, where such items are regarded with far greater importance than other Christian churches.

I'm very thankful that only one serious injury has been reported (to a firefighter), and no fatalities.  Given the hundreds of tons of lead sheathing in the Cathedral's roof, most of which melted in the flames and fell into the interior, it could have been much, much worse.

However, I'm also very angry at the rush to judgment by some extremists.  Within an hour of the fire making the news, they were proclaiming that it was started by Islamic fundamentalist arsonists.  They didn't speculate - they flat-out stated it as a fact, and began to foment yet more anti-Muslim hatred among their followers.  In the absence of any supporting evidence whatsoever, and given the already inflamed relations between Muslims and ordinary citizens in France, that was extraordinarily irresponsible.  I'm a firm believer in free speech, but I also believe that deliberately false speech should have consequences.  I hope their lies bounce back on their heads in French courts, if that can be arranged.

In the end, I think the Notre Dame fire should not affect the faith of Christians.  We may mourn the loss of a beautiful, historic building, and the loss of so many culturally important artifacts;  but, in the end, our faith is not in buildings, nor in artwork, nor in anything tangible.  This might be a good time to remind ourselves of that reality.

I agree that we should not rush to judgement as to the cause of this fire. However, given that there has been a rash of church vandalism in France over the last few weeks (including at least one arson) you have to wonder if the greatest current human enemy of the Christian faith (Islamists) are not involved somehow.

Geller (yes, I know) reported that a Time Mag reporter spoke with a Jesuit who works at ND/Paris; that Jesuit told him that the fire was deliberately set, according to the Jebby's pals in the construction crews.

One certainly hopes that this is NOT a Muslim op....

I will certainly not be rushing to judgment about moslims starting this fire despite the recent plot uncovered to do exactly this.

Nor does the spate of church burnings across France weigh in.

But the gleeful postings by moslims on moslim websites gives me far more than I need to know that they are, for the most part, people who should not be allowed into this country.

After the Muslims blew up the Buddas, did we expect that it would not continue in that vein? What is the Greatest Wonder of the World? That a man, when others are dying all around him, thinks that he will not die.

I want to draw attention to the courage of the fire-fighters. These old buildings aren't reinforced by steel. They are just stones piled on to of each other. A decent sideways force from say, a collapsing arch or vault, could cause the whole lot to topple. Bringing down the many fire-fighters on the ramparts fighting the roofing fire. The fact that the basic structure is still there is a great save.

I said the same thing on my facebook page, that it is unlikely to be terrorists because no one died in the blaze. Terrorists like to kill people. The most likely cause of the fire was an incompetent act on the part of the contractors doing the renovation. Someone did something inadvertently to cause the fire in the first place.

Has anyone considered a cynical move by Macron, who has been battling the populist yellow vests for weeks, and whose popularity has been circling the drain, and who was scheduled to give yet another unpopular policy speech that night? His lukewarm response to the tragedy was telling. The country mourns, rallies around their Lady, and the yellow vests disappear.
Or, maybe it was just careless construction workers.
Jen

Well, yes, no rush to judgement. But... Just like the 9/11 attacks, social media from muslims within France itself blew up with congratulations and smiley face emojis over pictures of Notre Dame on fire.

If they didn't start it, their actions and statements about it will damn many of them in the worlds' eyes.

Christians feel bad when a mosque gets damaged by fire, flood, war, other muslims. I've seen lots of articles in the past where both Christians and Jews have pledged to help rebuild, to repair, to provide food and security so rebuilding and repair can take place. Christians and Jews rush in to save the injured, to put out the fires, to make things better.

During Notre Dame? Smiley emojis, hand clapping, praise for the fire. Not good. Not good at all.

On a separate note, I am glad that this fire seems to have united and inspired old-school France. The renovations that were going on were mostly funded by American interests. Now that the fire has taken place, the French people themselves are pledging hundred of millions, from billionaires to corporations to people on the street, all pledging and chipping in. Sometimes it takes a punch in the gut to get a person's attention. This may have been the punch needed to awaken France about its history and heritage.

Yes, there needs to be resistance to the urge to rush to judgement. Until the facts are in, *no one* knows what actually happened. It is *much* too early to place blame squarely on the heads of Islamist saboteurs. OTOH, it is also not yet time to eliminate deliberate arson as a cause as the French authorities seem to be doing.

Give it time for the stones to cool and the investigators to do their jobs.

And yet, if it turns out to have been an act of jihad, I wonder if the authorities will ever actually confirm it?