A week ago, I wrote about how several nations are up-gunning their infantry fighting vehicles (IFV's) and armored personnel carriers (APC's).  Russia is leading the "caliber wars" with an updated version of a Cold War-era 57mm cannon, and others aren't far behind.

I mentioned the Franco-British CT40 40mm cannon in that article.  I've since been advised that, no matter how effective it may be, the cost of its ammunition is "eye-watering", due to its extremely compact and specialized design.  It's been suggested that each round is at least two to three times the cost of more conventional equivalents, and sometimes more.  If so, I'd regard that as a major concern.  Armies need to train with the weapons they're going to use in combat - simulators can only do so much compared to using the real thing.  If training becomes too expensive, due to the cost of ammo, then budgetary reality will dictate that training be cut back.  That can be disastrous when the proverbial brown substance hits the rotary air impeller.  It's something to keep in mind, for sure.  (The new Russian cannon will use conventional ammunition that's been in production for over half a century, and is well understood.  Even with more capable modern projectiles, the cost per round should still be manageable.)

Now we read that a new XM913 50mm experimental cannon has just been demonstrated for the US Army.  This is a very innovative weapon, one that's been resurrected from the scrap heap of the Cold War to become a very viable option for future armored vehicles, so I'd like to spend a little time on it.

Back in the 1980's, German firm Rheinmetall began developing its proposed Rh 503 cannon.  This was intended for use in the proposed Marder 2 IFV.  Two interchangeable barrels were available, one chambered for 35mm Oerlikon rounds, the other for a straight-walled version of that round known as the 50mm Supershot.  However, with the end of the Cold War, both projects were shelved.  Here's the Rh 503 cannon on display in a German museum, showing both barrels.

US production rights for the Rh 503 were granted to the Armament Systems division of General Electric in 1990.  Through a complicated series of corporate mergers and acquisitions, they've ended up with Northrop Grumman Innovation Systems today.  NGIS subsidiaries manufacture the M242 Bushmaster 25mm and Mk44 Bushmaster II 30mm series of light cannon for the US and other armed forces.  Those weapons, plus the Rh 503 concept, were refined and further developed into what is today known as the Bushmaster III (also termed the XM913), a cannon that can fire 35mm or 50mm rounds, depending on the barrel in use.  The 35mm version is already in service on some models of the Swedish CV90 IFV, and has been tested on the US M2 Bradley.  In its 50mm XM913 form, it's just been demonstrated at the Bushmaster User Conference in Arizona, as shown in this video clip.

A major advantage of this cannon is that it can fire commonly available, relatively low-cost 35mm Oerlikon ammunition for training and lower-intensity conflict.  It's produced in several countries, and in service with over 30 nations - I'm familiar with it from my South African military service.  With a simple barrel change, the cannon can be "up-gunned" to the 50mm version for a more challenging combat environment.  I daresay a 35mm round could be developed for training purposes that would duplicate the ballistics of the larger, heavier 50mm round, which would save even more money during training.

The ammunition is intriguing.  Here's a 50mm Supershot projectile (top), and the 35mm and 50mm projectiles compared (bottom - click the image for a larger view). 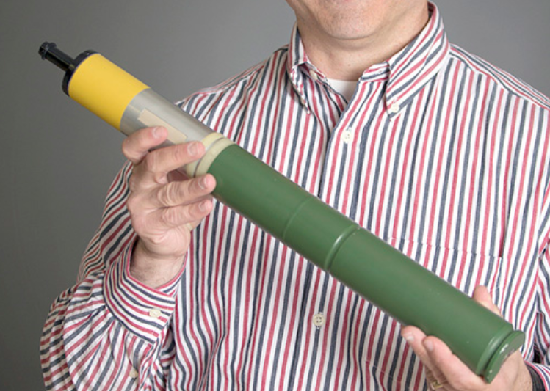 The 50mm rounds will thus fit into any turret or ammunition storage compartment that will take the smaller 35mm rounds - a major advantage.  They're both longer than the fully telescoped CT40 40mm cartridge mentioned last week;  but, as noted above, the latter is a very expensive proposition indeed.  The 50mm Supershot appears to be a nice balance between effectiveness and cost.  You can read more about the 35mm/50mm round here (scroll down that page to the section headed "Based on the 35mm Oerlikon KD").

I think the Bushmaster III, in both 35mm and 50mm versions, will offer sufficiently greater lethality, plus the ability to fire guided 50mm rounds, to meet future US army requirements.  I suspect it'll still be a step below the new Russian 57mm. cannon in terms of maximum effective range, but it'll probably be fielded with superior targeting systems, which will help make up for that.  (That's a similar situation to what South Africa faced in the 1980's, when it developed its Rooikat armored reconnaissance vehicle.  It would have to go up against Soviet tanks such as the T-55 and T-62, with their 100mm and 115mm. cannon;  but it could not carry a gun of similar dimensions.  South Africa accordingly reverse-engineered and modified the OTO Melara 76mm naval cannon, adapting it to a wheeled turret.  It proved enormously successful.  Its high muzzle velocity and flat trajectory meant that its ammunition could penetrate a T-62's armor at up to 2,000 yards, and its excellent electronics enabled it to hit accurately at such ranges while firing on the move.  It never saw combat, entering service just at the end of South Africa's so-called Border War, but it was a splendid weapon on a very versatile platform, and is still in use.)

I daresay the Bushmaster III may prove just as versatile over time.  We'll have to see.

It will come down to cost factors... as usual... The cheaper ammo will win... sigh

the US Army has a bad habit of taking the least expensive and simplest weapon system that does the job intended, and making it the most expensive and broadly least effective weapon of all those other possibilities.

Although it's not the same gun, the USN's Zumwalt class destroyers have a 155mm main gun that they can't use, because the ammunition costs a million dollars per round, so they're not buying it. So they've repurposed the class (limited to three ships, after which they went back to building Burke's) for missile surface strike, while they ignore the gun temporarily.

See https://news.usni.org/2019/01/21/navy-studying-hyper-velocity-projectile-ammo-zumwalt-guns for things the Navy is thinking of doing to make the gun useful.

Neat! It's so useful, such a simple concept, that the US Army is sure to ignore it.