Looks like the F-35 Lightning II is still a boondoggle


In numerous posts over the years, I've criticized the F-35 Lightning II, the so-called "Joint Strike Fighter", as a boondoggle and a failure.  Despite glowing articles released by its supporters in the news media, I've seen nothing to make me revise that opinion.  It may be technologically marvelous, but its serviceability and - above all - its exorbitant cost make it simply unaffordable.

The Project on Government Oversight has highlighted the major problems with the platform in its most recent report.

Sold in 2001 as a cheap multi-role fighter at a promised $38 million per plane, the troubled F-35, now at an average $158.4 million per copy, continues to dramatically underperform in crucial areas including availability and reliability, cyber-vulnerability testing, and life-expectancy testing.

For as much as the 2018 report from the Director of Operational Test and Evaluation (DOT&E) reveals about the F-35’s lack of progress in nearly every essential area, it is markedly less transparent than previous reports. It provides no updates on the crippling deficiencies highlighted in previous years, reports far fewer findings critical of the program than earlier reports, and contains almost no quantitative results on the F-35’s most urgent problems. The report omits any mention of the program’s fully mission capable rate—let alone the Navy version’s—which is the most significant measure of whether a fighter force is ready to show up for combat.

Despite an ongoing stream of optimistic press releases from the Pentagon, the information that is provided by DOT&E shows that the F-35 is still in trouble in these vital areas:

But the report presents precious little hard data on maintainability; availability and flying hours; weapons-testing results; ALIS-caused maintenance problems; pilot difficulties with sensors and display; and shortfalls in testing resources and realism. By leaving out any information on the program’s fully mission capable rates, which previous years’ reports included, DOT&E keeps the public from knowing the percentage of time these aircraft are ready to perform all of their intended missions. It is unclear why this is absent from the report, but it raises questions as to whether performance has actually gotten worse, and whether the Pentagon is seeking to hide that fact.

The most important measure of an aircraft’s readiness for combat is the “fully mission capable” rate. This is the percentage of aircraft on hand that have fully functional, non-degraded vehicle systems (flight controls and engine), electronic mission systems (radar, electronic warfare systems, computers, etc.), and weapons employment capabilities—a particularly important measure for the F-35. The 2017 DOT&E report showed a 26 percent fully mission capable rate across the entire F-35 fleet. Because the 2018 report makes no mention of this rate, it is impossible to know what the 2018 rate was.

The F-35's cost per flight hour is also a matter of profound concern.  If that's too high, it will chew up operating budgets, leaving too little to pay for other operational needs.  I note that the US Navy is buying more F-18E/F Super Hornets, which cost less than the F-35C and are much cheaper to operate.  It looks like the US Air Force's recent decision to order at least 80 more advanced F-15EX fighters may be motivated by similar factors.  Aviation journalist Steve Trimble reports: 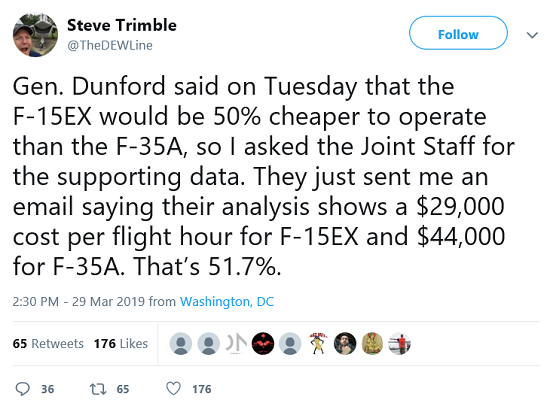 Given the low mission capable rates for all models of the F-35, these purchases of "legacy" fighters may be intended to both augment the troubled stealth fighter's numbers, and provide more affordable flying hours to service pilots.

All in all, we're stuck with the F-35 now:  it's too far along to be scrapped entirely.  Nevertheless, I remain of the opinion that it should be bought in minimum quantities, and its successor designed to avoid the problems that have plagued the Joint Strike Fighter program.  JSF should have learned from the disaster that was the F-111 program.  It didn't . . . and it's become just such a disaster itself.

The F35 program is not a disaster, but a complete success. At least, to the people in charge, who make their fortunes off the money spent. They care nothing about the military or the country.

If we were to kill it today, what fighter plane being built today would be the best replacement (until we could build a new boondoggle)?

So the wisdom of Pogo is as relevant today as it was when first stated over four decades ago - "We have met the enemy, and he is us."

Who calculated that percentage figure?

Surely simple percentages are taught in school, even to journalists.

The last part of that is arithmetically correct, but the first part is HIGHLY dubious.

And, quite frankly, if the Israelis like them, which, so far, they do, then that is actually a positive factor towards the fighter.

Teething pains. Especially in this era where it's more electronic component and software rather than something a fixer can wrench his way into and out of.

Yes, issues. But we're stuck with it. And it's still, overall, a better program than the LCS. At least, on the AF's version, the mounted gun works...

The ONLY advantage would be the stealth capabilities, as the UAE F-16 advanced avionics was leveraged to build the F35.

Remember that the F4 was considered one of the first stealth aircraft because it could fly faster than sound, so it could engage the enemy before it was heard.

A way will be discovered to defeat the stealth eventually, then the price just might be the determining factor in sustainability.

Peter,
The source you quote is, at best, rather tainted. Link: https://www.sourcewatch.org/index.php/Project_On_Government_Oversight

Besides the obvious political bent, there is no one on the board with engineering background.

Any technical information from such a source is best discarded.

For the F16 fans. In the first gulf war, how many aircraft were shot down by F16s? How many F16s were lost?

F15 and F16s date back to when I was a schoolboy-and I'm not a young man by any means.

In the most recent air to air against other Nato and US aircraft, the F35s did quite well.

Surely too expensive, but needed.

I must confess that I stopped reading the particulars of this hanger queen some years back. Still, it has always sounded to me as if it could more usefully be replaced by an equivalent value of Sopwith Camels.

Seems to me that rather than a not quite fly off between first article competing engineering prototypes the decision could have been deferred. The Boeing proposal should have stayed in production until one of the airplanes was clearly superior all around, land based, sea based and short take off vertical landing. If never then continued production or pick the superior variant in each case.

Going back to Dr. Pournelle The Strategy of Technology we are reminded that the most expensive air force is the second best. Maybe open a new competition going forward but first best is a necessity at any cost.

Further that there is a tension between present and future. FREX time was when cancelling the B 1 short of production and moving up on the B 2 was strongly advocated. With hindsight we are replacing the B 2 and using the B 1 in a non-nuclear that is non-strategic role.

Whatever might be said about the F35 in general it is clearly and importantly demonstrably superior to the dwindling numbers of Harriers.

IIRC, the word on the competition was that it was designed specifically to make the F-35 look good for sales effect. That it was not realistic.

Were they even using the F-16 in the first Gulf War? Most of what I remember about air combat in that war was the heavy use of the various versions of the F-15, especially the 'C' for air superiority.

I'm thinking the Navy is pissed about the cost. They tossed the F-14 due to the ~50 man hours of maintenance/flight hour. They downgraded to the F-18 due to that cost. REALLY bad sign when a military adopts a lessor capable weapon or system to replace an existing one.

f35's problems all stem from "multi-role" and "multi-mission" concepts. It got so heavy, that engineers were wondering if giving the pilots an enema before flight would help.
but seriously, if you want air to mud, get a air to mud and close air support airplane like an A10. if you want a fighter, get an F15. if you want. the marines want a harrier with balls. the navy wants an fleet defender and an attack aircraft. the air force wants something to compliment the F22. the tax payer wants less taxes.
therefore: F-35