"A meteor filled with swords"

A modified version of the well-known Hellfire missile, the weapon carries an inert warhead. Instead of exploding, it is designed to plunge more than 100 pounds of metal through the tops of cars and buildings to kill its target without harming individuals and property close by.

To the targeted person, it is as if a speeding anvil fell from the sky, the officials said. But this variant of the Hellfire missile, designated as the R9X, also comes equipped with a different kind of payload: a halo of six long blades that are stowed inside and then deploy through the skin of the missile seconds before impact, shredding anything in its tracks.


There's more at the link (behind a paywall, unfortunately).

As Task & Purpose discovered, there may already be photographic evidence of its effects.  Nick Waters provided these images via Twitter, showing the car in which Abu Khayr al-Masri, deputy leader of Al-Qaeda, was assassinated in Syria in 2017. 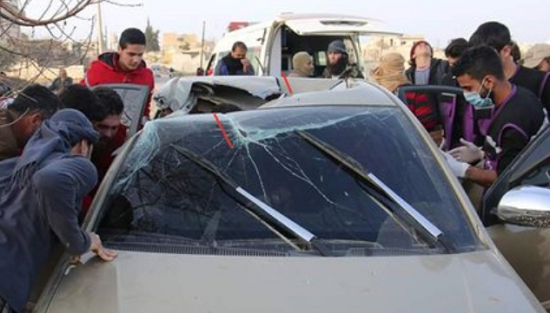 Video of the vehicle, showing recovery efforts, may be found here.  It certainly makes it look as if it was difficult to extract those inside, possible testimony to the striking power of the missile and its blades.

The red lines in the images above indicate straight-line cuts in the vehicle around the missile entry point.  Mr. Waters also showed this conceptual image of how the blades might deploy around the missile in the split-second before impact.  (The missile's electronics presumably measure how far it is from its target, and release the blades just in time to cause maximum damage, but before they can disrupt the weapon's flight path.) 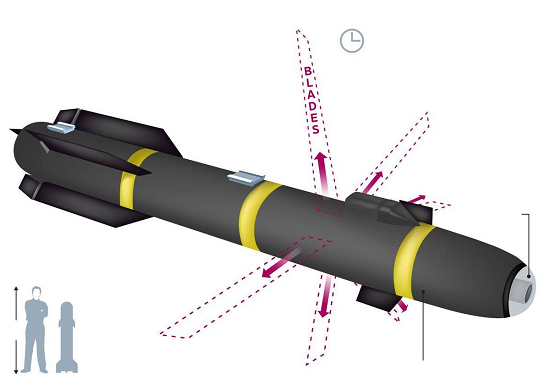 I'm familiar with simple kinetic weapons such as the USA's Lazy Dog bomb containing metal darts.  Rhodesia developed something similar under "Project Hotel", described as basically 6-inch nails fitted with plastic tail fins, scattered from improvised containers beneath an aircraft's wings.  They proved very effective in bush warfare, but were only used to a limited extent.  This approach, using a blade-equipped but otherwise inert Hellfire missile, is something new.  Given its velocity of over Mach 1, I imagine that even a glancing blow from one of them would prove lethally effective, while being much more precise than a scatter-shot area weapon.

So, an atmospheric version of space-based kinetic energy vehicles (rods from God, so to speak.)

Kinda like using an AP tank round for precision sniper fire. Which has been done before (there's some excellent videos, or there used to be, of M1 Abrams using depleted uranium rounds to slab sniper positions.)

Just as long as they don't use slaughterbots.

I read somewhere that the Chinese strapped sword yielding soldiers to rockets in order to penetrate berms or fortress walls many, many hundreds of years ago. It killed the attacking soldiers often by poor landings, premature explosions and severe burning during travel. This seems to be a much better idea.

"To the targeted person, it is as if a speeding anvil fell from the sky, the officials said."

"project hotel" was an early attempt at "green weapons" which after use the nails could be recovered and be used in housing construction to rebuild the country. there were plans to rename the weapon "nail biter" before the fall of the nation occured.
None were more cost effective as was "high frontier" which combined a guidance package and a ten foot length of rail road track to for a kinetic kill weapon designed to be lofted by an inexpensive missile to low sup orbit with the aim of showering upon an enemy combatant a "rain of steel". Trials continue.