A fascinating tale of obsession, teamwork and undersea exploration


The New Yorker has a very interesting (and very long) article about a man's obsession with reaching the bottom of the deepest point in every ocean, and how he set about it.  In the process, he built - as a private venture, using his own money - the only vessel in existence certified to dive to any depth, anywhere on Earth. 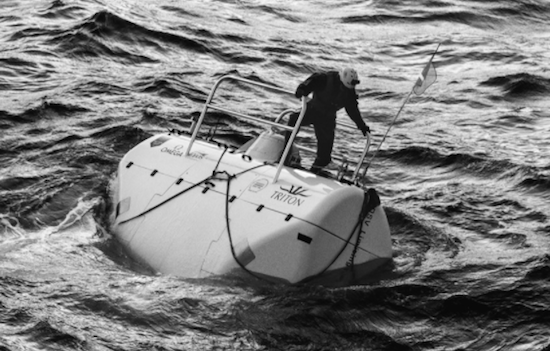 Most submarines go down several hundred metres, then across; this one was designed to sink like a stone. It was the shape of a bulging briefcase, with a protruding bulb at the bottom. This was the pressure hull—a titanium sphere, five feet in diameter, which was sealed off from the rest of the submersible and housed the pilot and all his controls. Under the passenger seat was a tuna-fish sandwich, the pilot’s lunch. He gazed out of one of the viewports, into the blue. It would take nearly four hours to reach the bottom.

Sunlight cuts through the first thousand feet of water. This is the epipelagic zone, the layer of plankton, kelp, and reefs. It contains the entire ecosystem of marine plants, as well as the mammals and the fish that eat them. An Egyptian diver once descended to the limits of this layer. The feat required a lifetime of training, four years of planning, a team of support divers, an array of specialized air tanks, and a tedious, thirteen-hour ascent, with constant decompression stops, so that his blood would not be poisoned and his lungs would not explode.

The submersible dropped at a rate of about two and a half feet per second. Twenty minutes into the dive, the pilot reached the midnight zone, where dark waters turn black. The only light is the dim glow of bioluminescence—from electric jellies, camouflaged shrimp, and toothy predators with natural lanterns to attract unwitting prey. Some fish in these depths have no eyes—what use are they? There is little to eat. Conditions in the midnight zone favor fish with slow metabolic rates, weak muscles, and slimy, gelatinous bodies.

An hour into the descent, the pilot reached ten thousand feet—the beginning of the abyssal zone. The temperature is always a few degrees above freezing, and is unaffected by the weather at the surface. Animals feed on “marine snow”: scraps of dead fish and plants from the upper layers, falling gently through the water column. The abyssal zone, which extends to twenty thousand feet, encompasses ninety-seven per cent of the ocean floor.

After two hours in free fall, the pilot entered the hadal zone, named for the Greek god of the underworld. It is made up of trenches—geological scars at the edges of the earth’s tectonic plates—and although it composes only a tiny fraction of the ocean floor, it accounts for nearly fifty per cent of the depth.

Past twenty-seven thousand feet, the pilot had gone beyond the theoretical limit for any kind of fish. (Their cells collapse at greater depths.) After thirty-five thousand feet, he began releasing a series of weights, to slow his descent. Nearly seven miles of water was pressing on the titanium sphere. If there were any imperfections, it could instantly implode.

The submarine touched the silty bottom, and the pilot, a fifty-three-year-old Texan named Victor Vescovo, became the first living creature with blood and bones to reach the deepest point in the Tonga Trench.


There's much more at the link, including many photographs.

It's a pretty amazing story about a man driven to achieve what had never been done before, and the team he assembled to do it.  It's very long, but I think it's worth the time it'll take to read it.  Highly recommended.

That is the sort of story the the New Yorker does well, and should concentrate on doing.

Awesome story. (and considering the protagonist is an evil global banker (ex) rich white guy, even more extraordinary in the coverage/slant.)

A fascinating story of human ingenuity and curiosity, thank you for bringing it to our attention.

It does sound interesting. I notice Mr. Vescovo has done this thing called the "Explorers' Grand Slam" as well. I feel that such a pretentious thing should also include a solo transit of the Sahara, maybe a solo rafting or kayaking of three or more rivers of not less than 2000 km length each, and maybe single combat with each of three large carnivorous species... though I'm still not sure about that last one. But definitely the Sahara, at least.

And once you can accomplish that, what’s plan B? You can now book a ride to the bottom of the Marianas trench for only $750,000: https://www.bloomberg.com/news/articles/2020-03-27/eyos-submarine-dive-to-challenger-deep-bottom-mariana-trench Seating is limited :)