Back in 1984, English author Rosalind Miles published a book titled "Modest Proposals:  or, May I Call You Mine?" 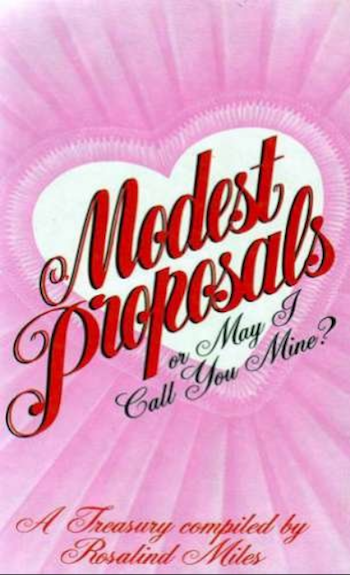 It's a light-hearted look at marriage proposals, real and fictional, down the ages.  My mother bought it when it came out, and had a good laugh over it:  and, when I was next at home, I did the same.  When I immigrated to America, I brought it with me as part of my library, so my copy is particularly well-traveled - from England, where it was printed and published, to South Africa, to the USA.

Here are a few excerpts.

The ideal proposal is a magical moment, a peak of ecstasy amid a whirl of impressions of beauty - ballgowns and roses, passion and palm trees, with the strains of heavenly music wafting in the distance.  But many people's experience falls far short of this ideal - they get the strains without the music.

Alida Baxter, for instance, found that her marriage proposal could hardly have occurred at a less propitious time and place.  As she ruefully confesses in her autobiography, "Flat On My Back":


I wouldn't be married at all if it weren't for that stomach upset I had in 1969.  I was run down, and being proposed to through the lavatory door caught me off guard.


Yes, well, it would, wouldn't it?  In fairness the Baxter swain had been doing sterling work nursing his inamorata through a combination of Montezuma's Revenge and the Black Death, on what was supposed to be a jolly holiday in Spain.  When language broke down with the Mediterranean medico, he even carried devotion to the extreme of miming her complaint for the doctor's better understanding - which was, in fact, diarrhea!

Now a man who'll mime diarrhea for you in front of a grinning foreigner is clearly a man of many parts, but a sense of timing was not among them.  He waited until his true love was philosophizing from the depths of the bathroom about the division of the Spanish nation into sadists and masochists - 'the sadists manufacture the toilet paper, and the masochists use it' - and chose this tender moment to pop the question.  As she says herself:


There can't be all that many people who've received a proposal of marriage through a lavatory door and I sometimes consider ringing up the Guinness Book of Records, but perhaps an ex-nurse friend of mine has the edge on me.  Her husband proposed to her after she'd given him an enema.

Of all prospective fathers-in-law, the most sorely tried must have been the father of Olivia Langdon, the best beloved of Samuel Clemens ('Mark Twain').  Clemens was a great admirer of women and by common consent at his best in their company:  'he loved the minds of women, their wit, their agile cleverness, their sensitive perception, their humorous appreciation, the saucy things they would say, and their pretty defiances', recalled one of his friends.  But he fell in love deeply only once, with the beautiful Olivia, as he confessed to his clergyman's wife:


I am in love beyond all telling with the dearest and best girl in the world.  I don't suppose she will marry me.  I can't think it possible.  She ought not to.  But if she doesn't I shall still be sure that the best thing I ever did was to fall in love with her, and be proud to have it known that I tried to win her.


There were tremendous obstacles in the way.  Although now so admired as a leading American writer and humorist, Clemens had had a rough life working and tramping in the Mississippi region, and traces of it survived in his manner ever after.  He was casual and irreverent;  he didn't give a fig for parlor protocol, and would make himself a terror to maiden ladies by putting his feet up on their tables and draping his loose-jointed legs over their chairs.  He was also an incorrigible prankster, and nothing was safe from his sense of the ridiculous.  More seriously, he had no position and poor prospects.  Stern Mr. Langdon was not about to entrust his daisy-flower to such an unpromising reprobate.

But Clemens was a smart man.  As soon as his feelings for Olivia were noticed on a visit, he was asked to leave.  But someone had removed the bolts from the back seat of the family station wagon - so when the horse moved off, the passenger was tumbled out of the back.  His resulting 'concussion' meant that he had to be carried back into the house, and nursed back to health - by Olivia!

Olivia herself was soon won.  But her father was unconvinced.  Finally he proposed that Clemens should provide some character references to establish his suitability as a husband.  Clemens wrote at once to half a dozen worthy citizens who had been on good terms with him earlier in his life.

Naturally any friend of Clemens would share his roistering sense of humor.  All his references obliged with outrageous replies stressing his rambunctious history and claiming that he would make about the worst husband since Blackbeard.  Clemens was summoned to the Langdon house to hear the verdict passed on him by his 'supporters'.  In his own words:


I couldn't think of anything to say.  Mr. Langdon was apparently in the same condition.  Finally he raised his handsome head, fixed his clear and candid eye upon me, and said, "What kind of people are these?  Haven't you a friend in the world?"

I said, "Apparently not."

Then he said, "I'll be your friend myself.  Take the girl.  I know you better than they do."


And so the day was won.

A proposal is a paradox - just as it can be the liberation of a woman, it can also be the clanging of the trap door for a man.  The state matrimonial has not always had a good press.  Marriage is an institution, said Oscar Wilde, and who wants to live in an institution?  His view received some support from Ogden Nash in a wry poem called "I Do, I Will, I Have":


How wise I am to have instructed the butler
to instruct the first footman to instruct the second
footman to instruct the doorman to order my carriage;
I am about to volunteer a definition of marriage.
Just as I know that there are two Hagens, Walter and Copen,
I know that marriage is a legal and religious alliance entered
into by a man who can't sleep with the window shut and a
woman who can't sleep with the window open.
Moreover, just as I am unsure of the difference between
flora and fauna and flotsam and jetsam,
I am quite sure that marriage is the alliance of two people
one of whom never remembers birthdays and the other
never forgetsam,
And he refuses to believe there is a leak in the water pipe or
the gas pipe and she is convinced she is about to asphyxiate
or drown,
And she says Quick get up and get my hairbrushes off the
windowsill, it's raining in, and he replies Oh they're all right,

it's only raining straight down.
That is why marriage is so much more interesting than divorce,
Because it's the only known example of the happy meeting of
the immovable object and the irresistible force.
So I hope husbands and wives will continue to debate and
combat over everything debatable and combatable,
Because I believe a little incompatibility is the spice of life,
particularly if he has income and she is pattable.

A very human story of a man's ambivalence, hesitating on the threshold of this great moment and undecided whether to go forward or back, is Jack Benny's courtship.  His girl loved him and had given him every sign of her feelings.  When he told her that he was leaving town, she blurted out, "If you were a gentleman, you'd ask me to go along with you!"

The effect that this simple line produced was devastating.  The great comedian, who had this effect on so many other people, himself literally fell on the floor and rolled about, laughing his head off.  Naturally somewhat miffed, our heroine lost no time in getting herself engaged to another man.  But as soon as her engagement was made public, she says:

"Well, that's fine for YOU," I said sarcastically, "but I'M getting married."

Without missing a beat, I said, "Fine."

"Well then," Jack said, "let's get married this Friday - BEFORE I CHANGE MY MIND!"


There are plenty more stories in the book, many of them highly amusing.  It's long out of print, but used copies are freely available.

Just to give you another "proposal" story...
This is the story I posted to our FaceBook page on our Twenty Year Anniversary...
A little background, both of my wife's parents passed when she was quite young. Her only living relative was her Grandmother, Mama Ruby, who was in her mid-nineties at the time and residing in a nursing home in Coleman Texas about a three hour drive from our house. We would drive out to visit and they would talk for hours as Mama Ruby was sharp as a tack and enjoyed visiting and talking...
So after visiting with Mama Ruby for a couple of hours I did get Mrs Jeannie to go on an errand so I could ask for Mama Ruby's blessing, which she gave.
- Then Mrs Jeannie came back and started chatting with Mama Ruby right where she left off. Since she couldn't hear well Mrs Jeannie turned towards her and leaned in close.
- I knew THIS was my chance, I quickly got down on one knee, got the ring out and grabbed her hand. As she turned towards me I said in my most romantic voice - "My Love, will you Marry me?".
- At which point she shook her head, looked me up one side and down the other and said those words every guy would Love to hear...

"What are you doing down there, did you fall down?"

- At this point, Mama Ruby, who couldn't see and barely was able to hear came to my rescue and said "What's going on, what did he ask you?" At which point my now Blushing soon to be Bride started to realize what I said and that no, I had NOT "fallen down".

And how would your bride describe your proposal? Inquiring minds want to know.