So far in this series of posts I've put up excerpts from a book by a particular author.  Today, I'd like to vary that format by putting up excerpts of reviews and newspaper articles dealing with the late Lesley Blanch.  She was unique, with a personality and outlook on life that defied convention and drove her to wander the East with a gimlet eye for adventure and history.  She lived to the ripe old age of 103, and was still writing her autobiography when she died.  (It was later completed by her goddaughter.)

One of her best-known books is "The Sabres of Paradise", a life of 19th-century Caucasian leader Imam Shamil, the so-called "Lion of Dagestan", and a history of his people's decades-long resistance to the eventual Russian domination of their land.  Much of the recent history of terrorism in Chechnya, Dagestan and nearby areas can be traced back to the events she described. 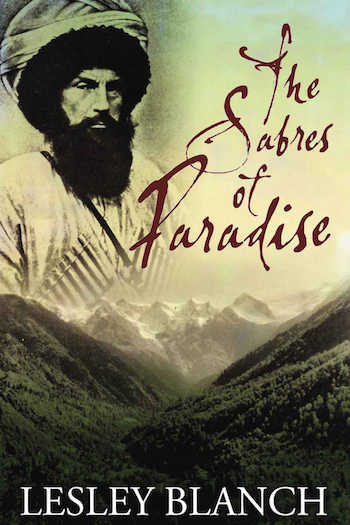 A little-known fact is that this book provided much of the inspiration (and the language) for Frank Herbert's famed SF novel "Dune", the first winner of the then-new Nebula Award (and joint winner of a Hugo Award, back when that prize actually meant something in literary and science fiction terms, before it was corrupted by social-justice-warrior political correctness). 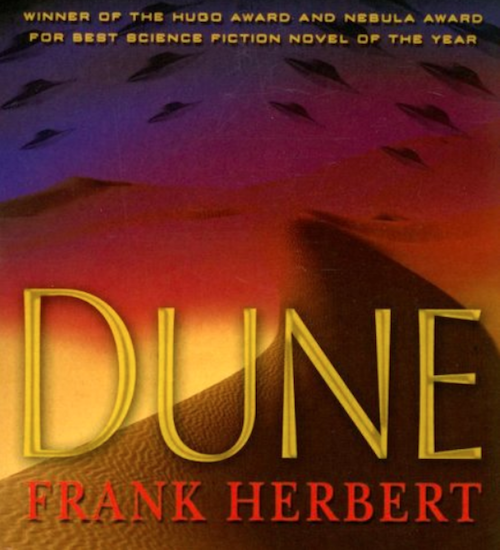 Let's begin with excerpts from a couple of lengthy discussions of her life.  The first is from the Guardian, written a couple of years before her death.  It's titled "Time Traveler".  In it, the man who shaped and formed the rest of her life is described.  She never divulged his name.

The delights of an Edwardian child's London paled ... beside the world opened up for her by a periodic visitor to the household, the mysterious Traveller. This never-named character, a part-Russian, part-Central-Asian friend of her parents (and possibly a former lover of her mother's) brought magic lantern slides of troikas in the snow and told tales of "Tarbagan Bator, the marmot hero of Mongol legend". He brought gifts to the nursery: "a chunk of malachite, or a Kazakh fox-skin cap (which smelt rather rank) and once a 'bunchuk', or standard, decorated with the dangling horse-tails of a Mongol chieftain". Journey Into The Mind's Eye describes how the Traveller enraptured her, how she became obsessed with the Trans-Siberian railroad, how he promised to take her on it one day and how that dream came to dominate her life.

The Traveller also took her back in time. He told of the Decembrists, aristocratic Russians who entered Paris in triumph after Waterloo. Ten years later they shattered the leaden calm of absolutist Russia with demands for reform and democracy. Tsar Nicholas crushed the revolt, and in so doing began the cruel century-and-a-half procession of internal exiles to the remotest regions of Russia's wild east. The church offered to facilitate annulments for the plotters' wives, but they chose to follow their husbands and suffered privation and exile with their men. These women and their journeys became Blanch's girlhood touchstone, leaving her out of step with the concerns of contemporaries and the agenda of schoolmistresses: "Oddly lacking in team spirit"; "moody and secretive" read the reports.

Blanch began reading Russian intellectual and diarist Alexander Herzen; to this day, she is never parted from a volume of his memoirs. Other favourites included Carlyle: "His treatment of the French revolution was extraordinary. The pace made you breathless."

The Traveller's silence during the war ended in 1921 with his reappearance at the Gare du Nord to meet 17-year-old Blanch, arriving in Paris for an educational break with a French governess. The two adults vied for control of the teenager's agenda: churches and royal monuments from one; Russian tea-shops, Cossack battalions camping in railway yards and a private recital by Rachmaninov from the other. Easter brought the dénouement. The Catholic governess refused to enter an Orthodox church, so Traveller and ingénue attended the midnight service unchaperoned. "Seeing the way the men spoke to him, and the manner in which the women looked at him, I now became aware of him as a stranger - as a man. It was most disturbing." A serenade by gypsy musicians at an after-hours restaurant, a kiss in the street and a tracks-covering note left at the hotel preceded Blanch's eager "ruin" in a Dijon-bound sleeping car as dawn came up over the French countryside.

After she had spent a year at convent school in Italy, Blanch and the Traveller convinced her parents to approve a "family" holiday in Corsica and the south of France "chaperoned" by the Traveller's Montenegran aunt and his two 20-something sons by different Silk Road mothers. This two-month idyll during which the boys referred to Blanch as "Mamasha" was, although she didn't know it, to be her last sight of the man who shaped her life.

Will Collins described her influence on Frank Herbert and his world-famous novel in a 2017 article titled "The Secret History of Dune".

Islamic theology, mysticism, and the history of the Arab world clearly influenced Dune, but part of Herbert’s genius lay in his willingness to reach for more idiosyncratic sources of inspiration. The Sabres of Paradise (1960) served as one of those sources, a half-forgotten masterpiece of narrative history recounting a mid-19th century Islamic holy war against Russian imperialism in the Caucasus.

Lesley Blanch, the book’s author, has a memorable biography. A British travel writer of some renown, she is perhaps best known for On the Wilder Shores of Love (1954), an account of the romantic adventures of four British women in the Middle East. 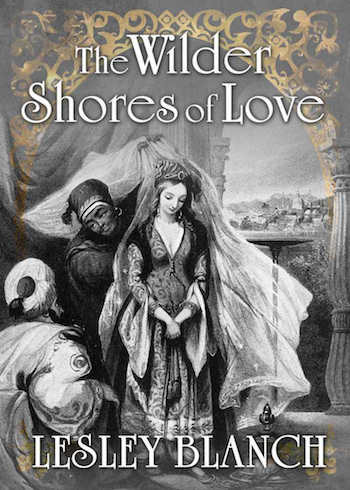 She was also a seasoned traveler, a keen observer of Middle Eastern politics and culture, and a passionate Russophile. She called The Sabres of Paradise “the book I was meant to do in my life,” and the novel offers the magnificent, overstuffed account of Imam Shamyl, “The Lion of Dagestan,” and his decades-long struggle against Russian encroachment.

Anyone who has obsessed over the mythology of Dune will immediately recognize the language Herbert borrowed from Blanch’s work. Chakobsa, a Caucasian hunting language, becomes the language of a galactic diaspora in Herbert’s universe. Kanly, from a word for blood feud among the Islamic tribes of the Caucasus, signifies a vendetta between Dune’s great spacefaring dynasties. Kindjal, the personal weapon of the region’s Islamic warriors, becomes a knife favored by Herbert’s techno-aristocrats. As Blanch writes, “No Caucasian man was properly dressed without his kindjal.”

Herbert is ecumenical with his borrowing, lifting terminology and rituals from both sides of this obscure Central Asian conflict. When Paul Atreides, Dune’s youthful protagonist, is adopted by a desert tribe whose rituals and feuds bear a marked resemblance to the warrior culture of the Islamic Caucasus, he lives at the exotically named Sietch Tabr. Sietch and tabr are both words for camp borrowed from the Cossacks, the Czarist warrior caste who would become the great Christian antagonists of Shamyl’s Islamic holy warriors.

Dune’s narrative, however, owes more to The Sabres of Paradise than just terminology and customs. The story of a fiercely independent, religiously inspired people resisting an outside power is certainly not unique to the Caucasus, but Blanch’s influence can be found here, too. The name of Herbert’s major villain, Baron Vladimir Harkonnen, is redolent of Russian imperialism. Meanwhile, Imam Shamyl, the charismatic leader of Islamic resistance in the Caucasus, describes the Russian Czar as “Padishah” and his provincial governor as “Siridar,” titles that Herbert would later borrow for Dune’s galactic emperor and his military underlings.

Her goddaughter, Georgia de Chamberet, helped write her autobiography, "On the Wilder Shores of Love: A Bohemian Life", and completed it after her death. 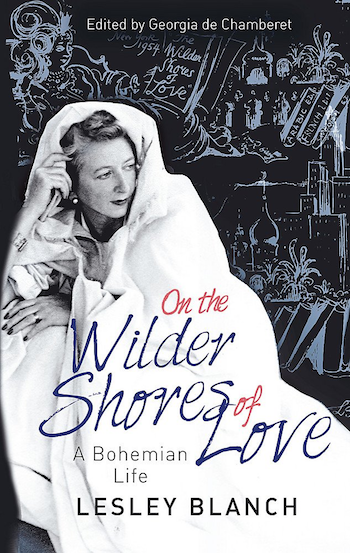 de Chamberet also edited a selection of Blanch's reminiscences in a second volume, "Far to Go and Many to Love: People and Places". 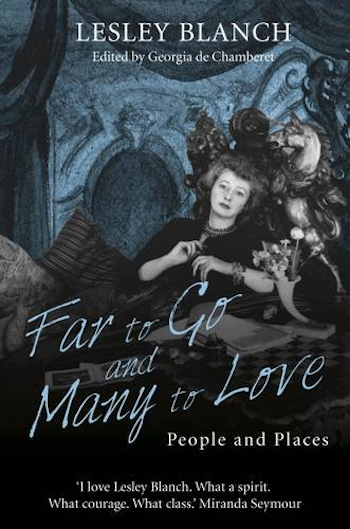 In a 2017 article, de Chamberet described her impressions of Lesley Blanch.

Lesley and my artist-writer mother, Gael Elton Mayo, met in New York in 1951 through their Polish-Russian husbands. Both were exceedingly pretty and precocious. They remained close despite their gypsy lifestyles. When my mother died of cancer in 1992, my godmother became home from home.

Her little pink house in Garavan, on the French-Italian border, was surrounded by an aromatic Mediterranean jungle. It was filled with treasures from Lesley's travels: Russian icons, samovars, Qajar paintings and rugs from Persia and Turkey, exotica from India. Divans and the scent of incense and jasmine enhanced the atmosphere.

Lesley wrote longhand at a desk strewn with books and papers in the living room. On a visit in June 2001, she was fretting about the late delivery of an introduction for a reprint of Isabelle Eberhardt's Journals. So I deciphered her graceful writing and typed it up on my laptop.

For years she had spoken of writing her memoirs, and hopeful biographers hovered, but got nowhere. Lesley began to jot down fragments of reminiscences: working as features editor at British Vogue during World War Two with Lee Miller and Cecil Beaton; 1950s New York and Leo Lerman, Carson McCullers and Simenon; the golden age of Hollywood and Marlene Dietrich; traveller's tales about Mexico, Turkey and Afghanistan. I did not indulge in flattery, having observed what happened to people who "gushed". I occasionally made comments and asked questions, initially received with sharp-edged reserve. Then we began to look forward to our time together.

Lesley wrote and rewrote obsessively late into the night; hauling books out of the shelves to check names or places. She taught me a great deal about writing. I regret not asking probing questions: I was too respectful. But she had begun to open up: to push her meant she might snap shut.

Writing is an act of seduction. A writer and an editor working together on a book is like an affair, involving intimacy and trust. The editor is totally committed to the book, does everything possible to help the writer make it the best they can; and then they do everything possible to give the book and its author the greatest chance of success when published. After Lesley died, I was determined to complete the work we had started, and carry out her vision - made a little easier by her making me her literary executor.

Lesley Blanch died in 2007 at the age of 103.  You can read her obituary in the Guardian to learn more about her.  There's also more information in a Web site set up to celebrate her life and books.

I have several of Blanch's books in my library.  I particularly recommend the first two mentioned above (see the links provided).  You'll find a list of her books at Wikipedia, some of which are out of print, but all of which are interesting.

What an interesting life.

Definitely a mind of her own! :-D

Many thanks. Always looking for something to read
Never heard of her but looking forward to making her acquaintance!

Yet again,. Peter delivers a hammer blow to my budget. I have always followed Erasmus' wise method--"when I get some money, I buy books. If there is money left over, I buy food or clothes."

That's a fascinating link to Dune! It would never have occurred to me. I just assumed that all of the terms that I couldn't figure out were from elsewhere in the Arab world and just weren't obviously Arabic in origin, maybe Persian or something. But Dagestan! Wow.

Ah.. Well. At least she had some children of the mind, and one might survive a bit. Like Louisa May Alcott, she rise to the occasion.

Her parents have a lot to answer for.