My wife has just published her third novel, "Going Ballistic".  I think it's her best yet. 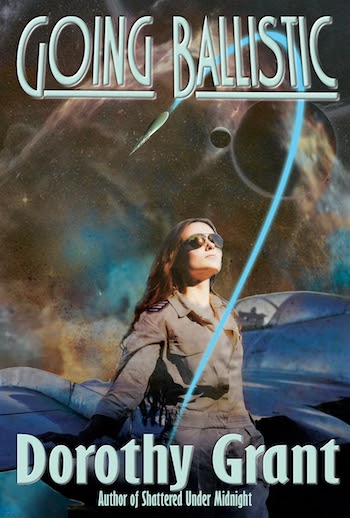 Dorothy is a pilot, and it shows to good advantage in this book.  She's able to describe the minutiae of flying, and the typical interactions of a pilot with airport and airline personnel, in a way that's authoritative, entertaining, and holds one's interest without becoming too technical.

A few other authors in the North Texas Writers, Shooters and Pilots Association, including yours truly, were consulted about the finer details of aircraft security, assault tactics, and other interesting military bits and pieces, so we were drawn into the action early on.  Some of our collective and individual memories of the loud-noises variety may be found in these pages, thinly disguised as fiction.

When her plane tries to come apart at apogee during a hijack, ballistic airline pilot Michelle Lauden handles the worst day she could imagine. After getting down without losing any passengers or crew, though, she finds her troubles have just begun!

The country she's landed in has just declared independence from the Federation. The Feds intended her passengers to be the first casualties in the impending war - and they're not happy she's survived to contradict their official narrative in the news.

The local government wants to find her to give her a medal. The Feds are hunting her to give her an unmarked grave. As they both close in, Michelle's running out of options and time. The only people able to protect her are an accident investigation team on loan from the Federation's enemies... the same enemies who sent her hijackers in the first place.

And they have their own plans for her, and the country she's in!


At present the novel is available in an e-book edition.  A print edition is in preparation, and will follow (God, the Internet and Amazon.com willing) within a month or so.

Ok, this should be fun to read.

Well, sorry Peter. You've been beat again. Downloaded it today, figured I'd start it during my rest shift. Now I'm done, no sleep, couldn't put it down. Love her writing style, love the concepts she comes up with.

I have a dabbling interest in flying, a greater interest in shooting. I never put the two together the way she did with her "introductory shooting lesson". Shear genius, and sounds like autobiography.

..And she snuck in a Pinelandia reference!

Thank you Dorothy, Thank you Peter for encouraging her. Please keep it up.

You're correct: it's her best yet.

I tried to buy it as soon as I saw this post but had to wait several hours.
Having read the first two I didn't need to be sold on it in any way. I read it the same night I bought it and couldn't put it down.