Back in the late Southeast Asian unpleasantness, a.k.a. the Vietnam War, Chuck Taylor was a Captain in the US Army's Rangers.  He saw combat, was wounded, and came home with medals for valor in action.  In other words, he was the real deal, not an REMF or a "PowerPoint Ranger" (to use a more modern expression). 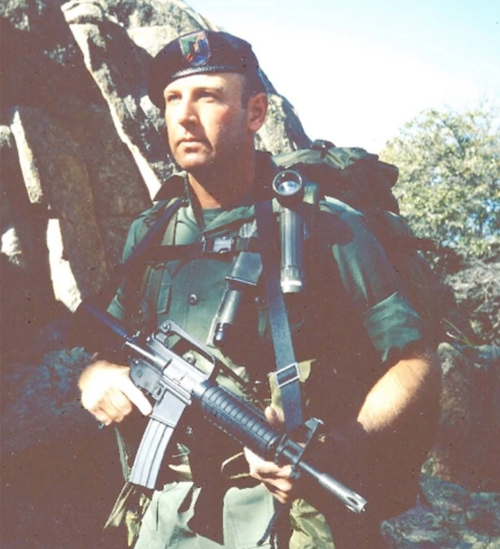 As such, I always gave extra weight to his opinions on self-defense equipment, tactics and training for civilians.  Not many instructors can boast that sort of real-world background, and being a combat vet myself, I naturally regard it as important.  (There's nothing quite like getting shot to remind you that you're neither invincible nor invulnerable.  How do I know this?  Ask my wife, who's had to pick shrapnel out of my old scars on more than one occasion.  As Clint Smith - another Vietnam combat veteran - has been known to observe, "Incoming fire has the right of way!")

Taylor was the first Operations Manager at Gunsite, the legendary shooting school founded by the late, great Jeff Cooper in Arizona in 1976.  He went on to found his own school, the American Small Arms Academy.  Some of its courses are still taught by Defense Training Associates.  He was also a member of the US National Team of the International Practical Shooting Confederation (IPSC).  Taylor taught civilians, law enforcement and military units for decades, passing on what he'd learned the hard way in combat and the techniques he helped develop in civilian life.  He was the founding editor of SWAT Magazine, still regarded as one of the premier firearms periodicals, and used its pages to convey much of the same instruction to its readers.

Some felt that Taylor was too rigid and dogmatic in clinging to what he'd learned by experience in combat, rather than being open to new technologies and techniques developed since then.  On the other hand, I think he was spot on.  To this day, I remain skeptical of "the latest and greatest thing since sliced bread".  If a new technology comes along that promises to make self-defense easier and more reliable, I want to have that thing wrung out six ways from Sunday, and proven in the field, not just in the laboratory or on the training range.  (Red dot sights are a good example.  Early models were all too prone to run their batteries down or suffer breakages just when you really, really needed them.  By the late 1990's and early 2000's, those initial teething troubles had largely been overcome, and they became so useful as to be almost indispensable.  The US Army and Marines have subsequently bought hundreds of thousands of them, with good results.)

Taylor was adaptable enough to change his views after such new technologies were proven.  His earlier books and articles reflected his initial attitudes about such things, but people reading them today often fail to take account of his later work, where he recognized their value after taking the time to prove (and im-prove) them.  He retained my respect as a man who'd "been there and done that", and therefore knew what he was talking about in a very practical, experiential way that most instructors can't match.

Sadly, Taylor passed away earlier this month, after only a year of retirement to relax and enjoy himself.  He joins Jeff Cooper, Ray Chapman and other stalwarts of the 1970's and 1980's on the Honor Roll of those who've made a tangible difference to the art and science of defensive shooting.  More and more of their colleagues are leaving us as age catches up with them.  The shooting world will be much poorer when the last of them has passed.  So vast an accumulation of practical, empirical knowledge can't be replaced, and can't be reduced to mere words on paper.  (That said, some of Taylor's books are still available, and are worth reading, IMHO.  Many of his articles are also out there, some available online.  He was particularly well known for his "torture test" of an early-model Glock 17 pistol, which has fired several hundred thousand rounds yet remains perfectly serviceable and reliable.)

May Chuck Taylor rest in the peace he so richly earned through his service to his country and the shooting community.

RIP sir, you deserve it!

I'm trying to figure out what, if any, connection there is between this man and the shoes made by Converse.

@Dave: Nothing. There was a famous basketball player with the same name, and the shoes are branded to him.

Great, there's another Dave running around here. Am I gonna have to change my handle? :)

Doesn't help I was wondering the same thing :)

I had the pleasure to know Chuck and took a couple of courses from him. Outstanding educator and a font of good and educational stories. He was one of the few guys in the gun world I knew I could take what he said to the bank. His writings are VERY worth seeking out. The world is a lesser place for his passing.

Chuck was also the head of instruction for the first year of Front Sight, started in '96. I took several classes during his tenure. He and his group of assistants were first class. They had a falling out with the owner of the school, unfortunately.

It should be pointed out that retirement from a physically demanding job/regimen seems to be the kiss of death, literally. "Farmer Frank" James would be a good example.

He was a great teacher, and a true gentleman to get to know.

I had the pleasure of being in a small circle of folks who would get together on Friday afternoons at Murphy's in Prescott for appetizers and libations, where I got to know Chuck quite well. Eventually took some classes from him, and had the honor to be invited by him to go "donking around" in his Jeep Scrambler in the backcountry on several occasions. We spent several days cruising around looking for Coyotes, Jackrabits, and other targets of opportunity for our rifles.

He was a great guy, and a true gentleman.