Demonocracy is known for its graphic illustrations of financial facts and figures that can be so large we simply can't grasp them.  It puts them into visual terms to which we can relate.  For example, here's $1 trillion in $100 bills, stacked up and arranged neatly together alongside objects with which we're familiar (a Boeing 747, an eighteen-wheeler, the White House, etc.) for scale.  Click the image for a larger view. 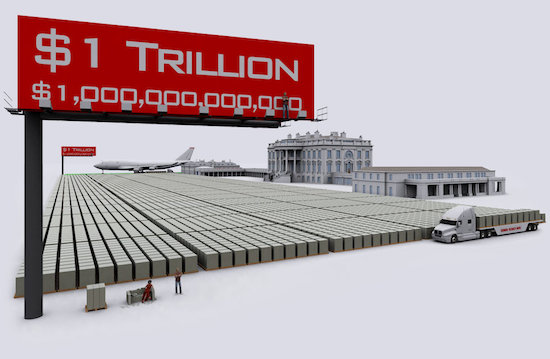 Demonocracy has used the same technique to visualize the current US stimulus package in response to the coronavirus pandemic.  It's frightening when you realize just how big it is - and understand that the whole thing is based on borrowings and "printed money", generated out of nowhere, with no economic reality to back it up.  Here it is in video form.  I recommend watching it in full-screen mode to get the full impact.

You can see the whole thing as a Web page at this link.  It's even more frightening like that than in a small video window.

Finally, remember that you and I - every single US taxpayer - is on the hook to repay that money, sooner or later.  I don't think that's economically or mathematically feasible, which leaves only two options.  Both may happen, separately or together.

As I said, the really scary prospect is that we may see both of those things happening simultaneously.  During the previous recession, the Federal Reserve ended up as the largest "buyer" of securities issued by the US Treasury, effectively printing money to pay for printed securities that weren't worth the paper they were printed on.  It's doing the same thing now, as international demand for US securities can't absorb the trillions of dollars required for the current pandemic stimulus package.  The Federal Reserve's balance sheet has grown astronomically over the past couple of months, and the growth shows no signs of slowing down.

There are those who argue that the current situation may lead to deflation, rather than inflation, due to asset prices taking a major hit.  In the short term, they may well be correct.  However, in the long term, the lesson of history is clear.  Dilute the currency in any way (adulterating precious metals with base, or printing money without any economic foundation to support it) and sooner or later, the chickens come home to roost.  Inflation is the inevitable result.

I think we're already seeing some of that affecting the consumer.  Have you noticed food prices lately?  I know they're attributed to market conditions, but I think they also reflect the underlying reality of inflationary pressure on the consumer.  I've demonstrated several times in the past that real consumer inflation, as measured by objective sources such as Shadowstats or the Chapwood Index, has been far higher than official figures.  As Miss D. and I do our shopping every week, we're seeing inflation even higher than that.  Some items' prices have increased by more than 25% since March!

What will dumping an extra few trillion dollars into the economy, money created out of nothing from nowhere, do to the rate of inflation over time?  I think we all know.

You are right on (most) of your counts, and all the ones that matter.

As I see it, there are 2 reasons that the government isn't yet seeing the impact of its spending:
1. The dollar is the global reserve currency and in several large areas all international transactions are priced in it (oil and airplanes come immediately to mind). This makes it a 'must have' currency for international trade despite the costs.
2. While other countries have large foreign reserves of dollars (see #1), relatively little of our government debt (aka Treasury Bonds) is held internationally. the vast majority is held by US institutions like banks, mutual funds, large investors, etc. While this is often by choice, in many cases it is not; those organizations are required by US law to hold a percentage of their funds in legally defined "safe assets" - real estate, certain corporate bonds, and US government debt. Since T bills, as they call them, are easy to buy and sell and there are LOTS of them on the market, they are a large part of the required safe assets. If this requirement were to change, there would be much less of a market for government debt.

I agree that we are seeing more and more inflation that is not being officially acknowledged for a variety of reasons.

Do you have any suggestions of what individuals should have as "safe assets" in times of inflation?

It's weird. As the primary shopper of the family, I saw food prices rise rapidly during the 2009-2016 period. Then they seem to have only periodically spiked, mostly leveled off. Spikes caused by bird flu deaths (eggs) and other natural disasters. We are still waiting on the floods last year and the supposed lack of meat processors this year to really hit both grains and meat prices. (My feelings is that a portion of the panic over both is more media and politically driven than reality driven.)

It was nice seeing the price of milk and other basic commodities actually drop in the last few weeks. We'll see if that continues.

Do keep in mind that the much vaunted T-bills are nothing more than promisory notes backed by "the full faith and credit of the United States of America." In other words paper IOUs.
Of additional concern is that the oft mentioned Social Security lock box, actually an electronic construct consisting of computer ones and zeros, is chock full of those self same T-bills, not actual cash as the Feds would have us believe. When times were flush and SS ran a surplus Congress in it's infinite wisdom decided that it was only fair to grab all those lovely dollars and replace them with US bonds.
But with the poor economy of the Obama years and an aging population the SS cash flow has turned negative. More must be paid out than is taken in every month. To cover the difference some of those bonds must be cashed out with the money taken from the general fund. And unless things change drastically even that fiction of a solvent SS system dies sometime around 2040 when all the lock box bonds are cashed in.
I have in the past likened the situation to being identical to mom and dad taking junior's college fund money out of his piggy bank to buy beer and smokes and leaving paper IOUs in its place.

The Fed has been methodically debasing the currency with imaginary money from the very first. If you think not compare prices a century ago when the Fed had just been in operation for a few years to prices now. With the massive increase in productivity since then many prices should be lower not everything much more expensive. The current stimulus increase in the money supply is a massive inflation. Remember rising prices are the result of the increase in the money supply not the cause of it.

Judging from history IF Rule of Law remains then a working farm held value. During the Weimar Republic's hyperinflation farmers would smuggle in bags of potatoes inside a hay wagon with a basket of "Hidden" apples for the soldiers to "Find". The street value of those potatoes was insane as farmers traded for family china and jewelry.

As our host Peter has seen when the rule of law is discarded and Communist-tribal warfare kills off those "rich" farmers, then NOTHING holds value. Fleeing the country with whatever health, skills and odd gold hidden in your clothing as my German Grand Parents did from Germany when the Nazi's started destroying Jewish property to the CHEERS of the "Downtrodden" Germans who bought into the idea the Jews were the problem. Never believe the "Common German" did not know of the camps, the Nazi Party REWARDED folks for turning them in with some of the loot.

There is some countervailing symptoms that will keep the dollar useful for a while, I believe. Big ticket items are going to drop drastically in value. Real estate, led by business real estate, is starting to crash. New cars are in oversupply, and used cars even more so - led by Hertz's bankruptcy which is dumping half a million cars on an already depressed market. Fuel is cheap right now, and will increase only slowly.

Dollars are still handy, and will stay so for some time, IMHO. Given history, buying precious metals can be risky - my father's family had gold during the Great Depression, until Roosevelt confiscated it. Go with the Alpha Strategy, buying stuff you can stash and will use at some time, that will keep its value. That includes (cough) toilet paper, although that requires a lot of space per unit and is not as efficient unless you have a lot of storage space.

I agree. Buy assets you can/will use. Long term preserved food. Junk land, extra ammo and reloading supplies, seeds, a new storage shed or tractor... Anything but dollars! And avoid perishables unless your turning your inventory.
Speaking of which, if you live in a sinful area, several cartons of cigarettes will have tremendous barter value.

I don't think many people understand modern cash flow. There is no "debt" at the Fed or Federal level. The Fed just creates money. The only debt is the other side of the balance sheet.

There can be a interesting discussion if this is good or bad, but a discussion about the so called debt is just silly.

If yoou don't think so, just consider who all this "debt" might be owed to? There isn't that much value in the world.