McCarthy as a Presidential placeholder???

Via Phil at Bustednuckles, I came across this social media post that offers a theory why Congressman Kevin McCarthy was the only serious Republican nominee for Speaker of the House.  I've cleaned up the language a little.  I'm not saying I agree with the author, but he certainly gives one pause for thought.  Click the image for a larger view. 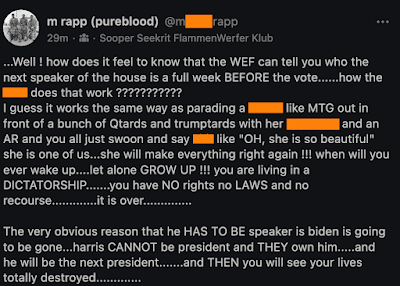 This should help you see what is at the bottom of the barrel awaiting us.

This is how they continue with their diabolical plans unhindered.

I gotta admit the Kabuki Theater was entertaining while it lasted but I could see what was coming.

They never once, in 15 votes, ever nominated anyone that even remotely had a shot at winning.

We have long wondered how they planned on getting rid of Kamala, still are as a matter of fact because it has to happen, but getting rid of the Kid Sniffer was always going to be a piece of cake.

When he is gone, any thoughts about Hunter, the laptop, the graft and the 10% for the Big Guy will fade off the screen like someone flipped a switch.

Never to be allowed to be brought up again.

Once Kamala is gone, McCarthy is installed and he will be the placeholder until they install President Newsome.

Go ahead and try to convince me otherwise.

As I said above, I'm not convinced that this interpretation of last week's events is correct.  However, there's more than enough smoke to suggest that there's a fire somewhere.  McCarthy is not a conservative by any means, and he's done nothing but politics all his life.  He has no track record in business, as an entrepreneur, as an intellectual . . . you name it, it ain't there.  He's just another political hack - a successful one, to be sure, but a hack nonetheless.  That makes me distrust him right away.  His main achievement has been to con his electorate and his party into making him wealthy and powerful on the back of other people.

This has been a long road for the good Speaker. I mean, he started out as a lowly staffer at the ripe age of 22, working his way up to being Speaker of the House through a long and arduous course of crawling over the mangled bodies of his opponents, serving all the right people, and shanking all the wrong people.

In case you haven’t noticed, I’m not impressed. McCarthy may be a consummate politician, but that’s all he is. According to his biography, he has never held a job outside of politics, at least not since college.

There is a place for professional politicians, don’t get me wrong. McCarthy obviously has talent in his chosen field. It’s just that, in my honest opinion, such folks should assist leaders, not be anointed to lead.

Here are some things that I cannot find evidence of in Speaker McCarthy’s adult life:

I wish Mr. McCarthy luck in his new position. I hope his 35 years of experience as being nothing more than a politician and legislator serve him well as Speaker of the House.

But I will always question upon what his decisions and opinions are based, since his career is based upon nothing more than a long-term commitment to politics.

McCarthy also appears to be sympathetic to the perspective of the World Economic Forum.  If Klaus Schwab's "Great Reset" is to become a reality, someone like McCarthy couldn't be in a better position to determine what legislation will, or will not, come before Congress for a vote;  and he'll be able to shape, form and modify legislation to suit the interests of those who control him.

Finally, I think Phil has a good point.  Biden is a placeholder, a nonentity who's been put in place because he can be easily manipulated.  His clearly visible and growing senility means he can be discarded for medical reasons as soon as it's convenient for his controllers to replace him - but they erred in choosing Kamala Harris as his Vice-President.  She's clearly incompetent at best, if not catastrophically error-prone.  She's the last person anyone would trust as President.  Even if she were to temporarily replace Biden, she will never be permitted to hold the office in her own right.  She'll always be under tight control.

However, the line of succession in the Presidency runs President - Vice President - Speaker of the House.  If Kamala were to resign, or suffer some event that prevented her from moving up, then McCarthy is legally next in line for the Presidency.  If he, a Republican, were to take over and continue Biden's disastrously inept policies, that would present a "bipartisan" mask to the country, and allow the grey eminences behind the Presidency to continue their work unhindered.  In reality, of course, the Uniparty would continue to function as normal - just as it does today.

It's an intriguing speculation.  Whether or not it's true will doubtless come out in the wash of history sometime during the next couple of years.

Seems our Republic has reached the Ides of March era of the fall of Rome.

This plus the economic facts of high (not quite hyper) inflation ready to tip over into Hyperinflation.

Anybody know where to get a copy of "The Death of Money"? The best book I know describing first hand viewpoints of the Weimar Germany Hyperinflation?

The McCarthy speakership seems to be an effort to pour perfume on a pig. The Brandon/Harris/Pelosi axis is so corrupt and so innept that it needs to be replaced by somebody acceptable to the Uniparty and to the world. I don't know how it will happen, but imagine a political match. up in 2024 between McCarthy and Hakeem Jeffries (new Obama).

The Uniparty might not be able to sideline Trump/DeSantis enough but an incumbent McCarthy might be able to solve that problem for them.

I thought two years ago they would find something to force Harris to resign and replace her with Hillary Clinton or Michelle Obama.
Then Biden would have a health issue and resign.

Too many moving parts.

Harris will stay long enough to appoint the VP they want. They don't need McCarthy.

Mr. Rapp is thinking of British royal succession. If the Dems can figure out how to dispose of Mrs Harris, be assured, her replacement will have been picked and be ready to roll out pretty much the same day. The odds of McCarthy moving up to the presidency, barring a successful ISIS attack on Washington, are zero. Timeline, allowing for bureaucratic inertia, looks like this:
Week 1 Monday: Harris is removed.
Week 1 Wednesday: Harris' replacement is rolled out.
Week 1 Friday: Committee to replace Biden is formed.
Week 2 Monday: Legislation to remove Biden is rolled out.
Week 2 Wednesday: Biden "retires" to a locked basement in Deleware, and the VP moves up.
Week 2 Friday: The new President announces his pick for VP.
Week 3 Monday: Barack and Michelle announce impending release of their next memoires, and Hillary pitches a fit over not being selected.

Biden is in place because he stayed in his basement cutting deals.(thks Don Surber) I don't see military service in Trump's background either, but there are plenty of ex-JAG officers in politics so I would discount that idea heavily. But sure, McCarthy vs. Newsome 2024!

Abebooks.com is where I usually go for hard to find books.
It looks like "The Downfall of Money", by Fredrick Taylor, is the book you want, available there used from $11, or new in paper for $22.

You forget that Harris gets to name her VP, not the House.
With both Ford replacing Agnew and Rockefeller replacing Ford, this was accomplished pretty quickly with a member of the same party as the President.

Also if your into political fantasy, Pelosi, Newsome, McCarthy and Harris are all Californians. Harris can pick another Californian as VP, nothing in the Constitution prevents it. She picks Newsome.

@Michael: That book is freely available on Amazon.com. It's good.

This covered in the 25th amendment paragraph 2

SECTION 2. Whenever there is a vacancy in the office of the
Vice President, the President shall nominate a Vice President
who shall take office upon confirmation by a majority vote of
both Houses of Congress

At present the Democrats have a majority in the Senate but not the House. However the Democrats have 212 house members, they need 218 to hit a majority. All they need is six quislings and President Harris (feh) would have her desired VP. Similarly it takes only the same six quislings should Harris "resign". Biden can get whomever he is told to select. More interesting would have been if the GA senate seat had not remained Democrat. With no VP there is no tie breaker so 50/50 is a deadlock (a majority is required). And of course should one or both of the Democrats problem Senators defect they can cause havoc. More likely they can threaten havoc and get concessions. Not sure if rules of either house would require a nominee for VP to recuse themselves from the vote, amendment is silent on this, only precedent was Gerald Ford.

Peter, I have a copy within reach, but I think a whole lot of folks here need to read it.

The very idea that ALL the "Money" we have can be quickly reduced into poor grade toilet paper is going to be a real shock.

Cashing Paychecks and rushing to the store to spend them before the prices go up, and the story of a family saving for a lake cabin using all of that money a few years later to buy a PAIR of Boots.

Folks should take notice even California "PAID" their employees in IOU's for some time a few years ago. Not too many folks accepted those Cali IOU's at face value as I understand.

Skills, trusted friends and a good garden helped more folks survive Wiemer Germany's hyperinflation and the fall of the USSR's economic collapse. In both cases the "Money" became worthless.

"There is a place for professional politicians, don’t get me wrong."

Actually, there isn't. Not according to the Founders, at any rate. They were quite damned clear about their feelings on that.

Well, unless you mean in the hottest corner of Hell, I suppose.

I count 51 places in the USA for professional politicians: Leavenworth and 50 state maximum security penitentiaries. The problem is, we take _way_ too long to send them there.

I believe the book you wan is “When Money Dies” by Adam Fergusson. Available as hard copy, ebook or audiobook.

Perhaps this is the book: The Death of Money, by James Rickards.