I was struck by this photograph, posted by Larry Langman on Gab: 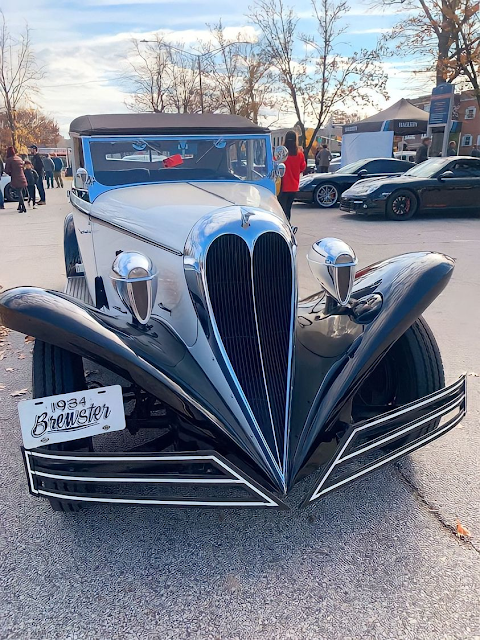 Intrigued, I looked for more information, and found an entry for Brewster & Co. on Wikipedia.  According to the entry:

Brewster & Company was an American custom carriage-maker and automobile coachbuilder founded by James Brewster in 1810 and active for almost 130 years.

By the time of the Great Depression which began at the end of 1929 there was strong sentiment against the wealthy and their archetypal Brewster-bodied Rolls-Royces and Brewster's bodies were not selling well. In 1934 sales chief J.S. Inskip, who had taken control of operations in the hope of saving Brewster, bought 135 Ford V8 roadster chassis for model year 1934 and designed a body for them easily identified by its swoopy fenders and a heart-shaped grille. Stylish and sold for US$3,500 ($70,897 in 2021 dollars), it was a hit at the 1934 New York Auto Show. The bodies were worth more than the chassis. These cars were branded Brewster and sold at Rolls-Royce showrooms.

There's more at the link, including this photograph. 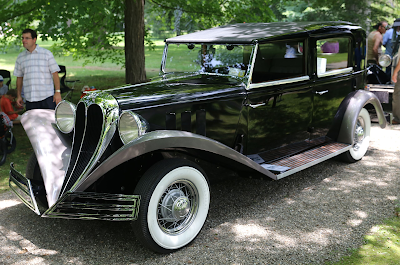 "Swoopy" it certainly is!  I'd never seen that design before.  It's an amazing example of Art Deco automotive artistry.

Sadly, ONLY the nose was special. The rest of the car was pretty much the standard you could get anywhere, just with slightly better materials.

I like the Woodlite headlamps in the top photo.

Looks nice but my lottery dream would be a Cord.

Small world. My old man was a sales manager for J. S. Inskip's eponymous post-Brewster company, selling Rollers, Aston Martins, and other top-end cars to the rich and famous. One weekend he brought home one of the Goldfinger DB5s. I still remember every minute I spent in that car. Every one of Q's special features worked except the ejection seat. The story is that it worked for one take in the movie, but the stunt man dislocated his shoulder on landing. Fortunately that take was a print and the seat was disabled after that.